Would the authentic liberals please stand up? 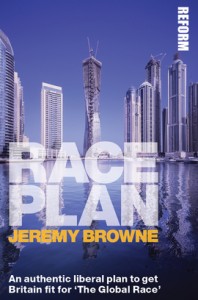 The arrival of Jeremy Browne’s Race Plan, published by the think tank Reform, has generated plenty of coverage in the mainstream and new media. Everyone – within the community of political nerds at least – has, for a few days at least, been talking about Jeremy. Presumably that was a large part of the point. So it’s already mission at least partially accomplished.

Much of the talk in the yellow corner is about quite what possessed JB to publish the book just a few weeks before a key election in which the party faces a wipeout. Given that much of what he’s saying isn’t Liberal Democrat policy the inevitable result will be to generate further confusion about what the party stands for in the minds of voters. You’d be hard pushed to disprove the hypothesis that he’s set the dial to maximum mischief.  Some commentators have condemned him for being self-interested. I’m not entirely sure he’d see that as a criticism.

This has set off another fun game of “we’re proper liberals and you’re not” among those who like to spar over these things. Browne’s position does raise some interesting questions about boundaries. Liberalism is undoubtedly and rightly a broad church, but does that mean that any self-declared liberal must be accepted as such regardless of the substance of their belief? Presumably you can take broad-mindedness too far.

For me, one sadness of these discussions is that they are always between different flavours of liberalism, with no recognition of the more complex ideological roots of the Liberal Democrat party. It is as if no one stops to reflect on why the party is called the Liberal Democrats. The Liberal party continues to exist as a separate party for those who want undiluted – indeed quite possibly authentic – liberalism.

But what of the substance of the book?

Now here’s the thing. I was expecting to disagree violently with Race Plan as the ravings of an unrestrained economic liberal. In fact, I disagreed with quite a lot of it, but not for those reasons. And then again I agreed with a fair bit of it too.

Others have pointed out that the whole premise of a global race, which is central to the book, is so much baloney. And a single sentence from JB buried in the middle of the book acknowledging that global trade and economic development isn’t a zero-sum game hardly neutralises all the rest of the global race talk.

Others have also pointed out that Browne seems strangely infatuated with China and its astonishing rate of economic development. He seems particularly impressed with its phenomenal rate of infrastructure investment. Browne rightly notes China’s poor human rights record as problematic, but he ascribes China’s rapid development, alongside that of many other middle-income countries, to their embrace of economic liberalism.

This seems to me to be highly problematic for his argument. Because either it means that “economic liberalism” can be defined to mean a largely state-directed economy or it means Browne is being rather casual with his use of terminology in order to make his argument. I guess it might also mean Browne doesn’t really have a firm grasp on what is actually happening. When it comes to talking economic development that wouldn’t be unusual. History offers us few if any countries that have managed to both embrace thorough-going economic liberalism and foster rapid economic development. Most of the countries that now preach economic liberalism to the rest of the world were anything but liberal in the earlier stages of their own development. Indeed, countries like the UK, where economic power is increasingly concentrated, don’t really conform all that well to the sorts of economic arrangements prescribed by the sacred texts.

Equally, unqualified arguments about the benefits of free markets are, I would submit, a bit passé. They are still popular with a certain breed of think tanker, no doubt. But there has, for example, been quite a bit of discussion within economics about whether the costs of highly liberalised capital markets outweigh any benefits. Free trade? Quite possibly. Free markets uber alles? Quite possibly not.

Much political discussion of the benefits or otherwise of markets and marketization is hugely unsophisticated. A more nuanced appreciation of strengthens and weaknesses of market forms of organisation exists in the academic literature, including a recognition of the sociality of markets, their social construction and management, and the profound significance of their institutional foundations. Browne’s take on these issues very much has a political flavour.

He is quite fond of the comparison between North and South Korea as illustrative of the advantages of economic liberalism over socialism. But that comparison is almost comically absurd. North Korea is undoubtedly abominably awful, but to imply that the alternative to economic liberalism is the type of communist totalitarianism practiced there is everso slightly risible.  There are plenty of societies that don’t embrace the sort of economic liberalism that Browne seems to favour but which are nonetheless able to survive and thrive. The strongly corporatist South Korea would be one of them.

There is a similar lack of subtlety and reflexivity elsewhere in Browne’s discussion. His characterisation of public services and his calls for their reform seem to ignore entirely the fact that these services have been subject to waves of marketization and attempts to inject greater user choice for the last thirty years. He is still railing against monolithic, one-size-fits-all bureaucracies. It feels like it is largely tilting at windmills.

Browne is right to highlight the relatively poor performance of the British education system. He notes the way in which the country has slipped down the PISA league tables since 2000, while countries like Singapore do stunningly well. It would be almost churlish to observe that the countries doing well tend to have rather strong states.  It would be, perhaps, more pertinent to reflect on the appropriateness of Browne’s favoured prescription – more parental choice. The casual observer might note that there is an association between the marketization of education we’ve already experienced and the relative decline in the country’s performance. The grade inflation Browne bemoans might be seen by some as a predictable outcome of a system in which schools are judged by league table performance and their income streams rely upon attracting students with the promise of exam success.

My aim is not to argue that marketization is necessarily wrong. My aim is to suggest that an argument that starts from a problem – poor educational performance – and defaults to a solution – more parental choice is the answer – without properly interrogating what’s got us into this situation is facile. This is a complicated topic. The empirical evidence on the impacts of marketizing education is mixed. It works for some people and not others. It works in some places and not others.  Browne acknowledges as much. But doesn’t ask the follow-up questions. Are the problems insuperable because of the intrinsic characteristics of the service or of the market actors? Or can they be solved, perhaps by better aligned incentives?  Or, rather, the assumption is that tweaking the incentives will do the trick, in the way that the pupil premium is assumed to do.

One notable silence in Race Plan is the challenge of reconciling the fundamental principles of liberty, equality and community. It’s right there at the beginning of the Preamble to the Liberal Democrat Constitution. One might have thought that an authentic liberalism would have something to say on the matter. But Browne’s focus is almost entirely liberty and the individual, almost no equality or community. It represents a deeply undersocialised view of human agency. All independence, no interdependence. We know from his public pronouncements that Browne isn’t a fan of the Preamble. It would be interesting to hear whether it is the notion that there is an important tension between these fundamental principles that he dislikes.

By far the strongest parts of Race Plan are those that deal with foreign affairs and international diplomacy. Browne does a very good job of making the case for Britain’s continuing role at a geo-political level. He makes a spirited attempt to argue in favour of the various international organisations and inter-governmental forums, albeit in some cases noting the need for significant reform. The case for Britain as integral to global governance, pressing the liberal cause in the face of rising powers with different values, is well made. The quality of insight here is very noticeably better than elsewhere in the book. It is clear that Browne is playing on home territory and is detectably more comfortable as a result.

Overall, I felt that Race Plan was a bit of a curiosity. I didn’t feel it was quite as much of a rip-roaring liberal manifesto as its author seems to believe. It unwittingly raises all sorts of questions about the necessity of a strong state to deliver the transformational change that Browne believes is necessary. I didn’t feel, in its prescriptions, that it was hugely innovative. Where Browne strays close to concrete policy proposals it is typically something that I can imagine David Cameron being entirely comfortable with. Whether Nick Clegg is quite so keen we are yet to discover. That isn’t a snide way of saying I think Browne should bog off to the Tories where he belongs. But when you list the policies Browne cites approvingly – reducing the top income tax rate to 40%, further austerity focused on reducing the generosity of the welfare state, more marketization of services, user choice, for-profit free schools, the pragmatic trade-based case for Europe – it is a list that wouldn’t look out of place in a Conservative manifesto. I’m sure there are other things that Browne would champion that the Tories would baulk at. It just isn’t quite so obvious what they are.

Browne’s book has got a lot of people talking. The Jezza fanboys and girls are rallying to the cause. Some are styling it an early salvo in the battle over the soul of the Liberal Democrats. The question then is how with ‘the left’ of the Liberal Democrats responds. There is much more to be said about where that debate might be heading. But now isn’t the time. It is very welcome that the book has got people thinking and debating what it means to be liberal. Or indeed Liberal Democrat. And if there’s one thing we all love in this neck of the woods it’s a good old debate.