The problem of housing supply

Housing supply and the pressing need for additional investment in new housing are making significant progress up the political agenda.

Today’s Times carries an opinion piece by Tim Montgomerie that makes the case for more investment forcefully. It is an argument directed at Conservatives. Montgomerie calls for political focus upon aspiration for younger people rather than the NIMBYism of older people. It will be interesting to see whether the idea that Tories should style themselves a pro-aspiration party that therefore supports a substantial house building programme will gain any traction.

Today also saw the publication of the RICS Housing Commission report. I’ll blog about that as soon as I’ve had chance to digest it. 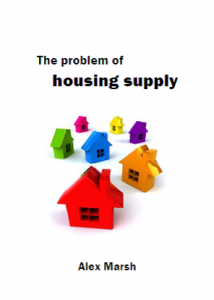 We are getting hints that there will be money for housing investment in this week’s Spending Review, in order to soften the blow of significant cuts elsewhere.

For those of us who have been exercised about the issue of housing supply for many years the increased media and political attention is welcome. We can but hope that it is not a fleeting moment, quickly past. Rather let’s hope it is a sign that the political elite is, at last, getting serious about a problem that for too long has been only too evident to many people outside the Westminster bubble.

I have been blogging about the issue of housing supply every now and again over the last couple of years. I have now brought together a selection of these posts into a collection called The problem of housing supply. The collection touches on issues such as land use planning, the house building industry, and the land market. It also considers a number of Coalition Government policies including Localism and Help to Buy.

The collection is available below the fold here or via the bookshop.

The problem of housing supply