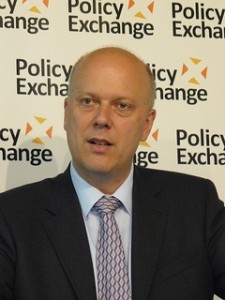 In today’s Telegraph Chris Grayling goes on the offensive. And his article certainly is offensive. It’s an offence against nuanced debate for a start.

Grayling’s argument in summary is that Britain is in “a global race” that is getting tougher. The Conservatives “support wealth and job creators” and that is one of their “red lines”. This is contrasted with the other parties, which are “bringing back the politics of envy”:

And this stance, Grayling argues, shows “a complete lack of understanding of the world”.

Grayling’s piece is clearly timed to coincide with the Labour conference. But it has also been interpreted as part of the broader manoeuvring ahead of the next election. Grayling may be signalling the ways in which the Tory right – of which he is one of the most prominent members – intend to force Cameron’s hand.

Be that as it may, the most striking aspect of Grayling’s piece is its intentional vagueness regarding the identities of all these “wealth and job creators” who will be hit by punitive new taxes.

He does, however, tell us a little story. It is a story about those who are heroically going to win the global “contest” for Britain:

There’s the entrepreneur, who mortgages the house to invest in building a business. It’s a hell of a risk. You don’t know if you will succeed. And if you don’t, you could lose your home and put your family under pressure. But the prospect of building a real success is too alluring. And so that entrepreneur takes the risk, works seven days a week, and slowly, step by step, builds a success – that creates jobs, wins business from overseas and creates wealth that will pay for public services and support for the vulnerable. There is no other way of earning money for Britain. It’s no different to a household. If we don’t earn our keep in a competitive world, we can’t pay the bills for the things we want to do.

The way this passage starts (“There’s the entrepreneur ….”) suggests that this is the first example offered and more will follow. Except they don’t. Entrepreneurs of this type are undoubtedly important for a vibrant economy and make a valuable contribution to society. The only problem for Grayling’s argument is that they aren’t typically the ones who will be paying tax on incomes over £150,000 per year or paying any future mansion tax. Most of them don’t earn anywhere near enough money, and never will.

Many of those who would end up paying the tax are in high paying professions such as commercial law or management consulting. Or they are the beneficiaries of the less than competitive process of setting CEOs salaries or of a city bonus culture in which pay is only intermittently connected to performance. Or they are rentiers profiting from property speculation and shortage of rental accommodation. Or they are successful rent seekers who have managed to extract monopoly rents from the privatisation of public services.

Grayling, no doubt, knows this perfectly well. So he needs to reframe the issue back to his preferred narrative – the nobility of the rich who slave away for the benefit of us all:

The Left, when they talk about wealth taxes, always single out the bankers. But most of those who would be penalised by these new assaults on the rich are the people who sweat to create the jobs we need for the future. If success means giving all the proceeds to a Labour government, why would you try? And if there are fewer jobs, then it is the poorer members of our society who are the real losers.

Grayling suggests that taxing such activities is the “politics of envy”. But much of this activity is unproductive and distorts the UK economy. If the relative rewards associated with trading unnecessary financial products or speculating in overpriced property were reduced then perhaps Britain’s brightest and best might instead be attracted to genuinely entrepreneurial activity in science, engineering or ICT.

I am also struck by the fact that party conference season – the proximate cause of this debate kicking off – coincides with the release of this year’s British Social Attitudes survey, which showed an increased concern about the gap between rich and poor and an increased proportion of respondents who thought that the government should redistribute income.

Clearly, if we were of the Grayling turn of mind, this is a worrying development. We need to put the frighteners on people and remind them of the cataclysmic consequences of seeking more extensive redistribution. We’ve got to emphasize that Labour (and the Liberal Democrats) are intent on taking from people what is rightly theirs by hard work. We’ll quickly draw a veil over the fact that the proportion of income going to the top 1% has increased from 8% to over 13% since the late 1980s. Simply returning to the status quo ante would in no way represent the arrival of “socialism”, but it would surely represent a significant redistribution towards poorer households.

Grayling’s piece quite possibly represents the first skirmish in what is set to be a war of words as we turn the corner towards the General Election in 2015. Those who wish to try to halt, and possibly reverse, the process of wealth concentration that is currently under way in Britain need to patiently but forcefully argue the case for the negative economic, social and political impacts of inequality. That isn’t the politics of envy. And it isn’t socialism. It is a position that recognises that if Britain had a fairer economy it would have a stronger society, as the Liberal Democrats don’t quite say.