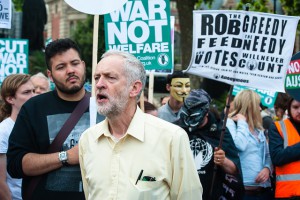 I find it hard not to feel a little sorry for Labour.  It is being offered plenty of advice, much of it conflicting. Move left to recapture ground lost to the SNP in Scotland. Move right to combat the threat from UKIP in white working-class areas in England. Offer a radical vision of hope sufficient to stir the dispossessed and disenfranchised to engage with the political process. Position a millimetre to the left of the Conservatives to demonstrate fiscal rectitude and appeal to the few thousand fickle voters that constitute the political ‘centre’, who are conventionally seen as the key to victory.

Of course, there is more than a suspicion that the party has to pursue all these strategies simultaneously if it is to form a government again. To implement such a multidimensional strategy successfully, and avoid descending into abject incoherence, would truly be a work of political genius. It may quite possibly be a feat beyond even the subtlest of political intelligence.

Political genius has not been much in evidence during the current party leadership campaign.

The campaign has been characterised by a distinct lack of vision and verve. It has latterly been sent into a bit of a tailspin by the news that Jeremy Corbyn, far from simply providing a bit of light relief by reminding us all of the left’s disastrous yesteryear, might actually have a chance of winning. Some on the left view this prospect with glee. Some on the non-Labour right view this prospect with glee. Those on the right of the Labour party view it with utter horror.

It is easy to see why Corbyn is doing well. He has a clear idea what he believes in. He knows what he wants to see happen. And he can explain what he believes in and what he wants to happen without coming across as a swivel-eyed loon. Contrary to suggestions all over the mainstream media that he is pedalling a fantastical and indigestible hard-left agenda, it turns out that quite a lot of what he wants to see happen goes down well with quite a few voters. A Labour politician who is willing to stand up for leftwing principles? Remarkable.  Perhaps more remarkable is the contrast with the other contenders for the party leadership. They’re all busy triangulating every position and calibrating every utterance so as to appeal to the centre ground. The net result is that it is hard to get a clear idea of what they stand for and how that shapes their policy propositions.

And while this seemingly interminable leadership contest rumbles on the business of politics continues.

The Labour party’s plight was dramatically illustrated last week by its response to the Conservatives’ welfare bill. Harriet Harman’s instruction to abstain on the vote on the second reading was defied by a good chunk of her own MPs.

The whole bill would appear to be designed as a trap for Labour. A trap which the party failed to avoid completely.

You can see the logic of Harman’s position. Voters think that Labour are soft on ‘welfare’. So we’re not going to vote against the Government’s proposals to further impoverish the already disadvantaged: that way we will restore fiscal credibility. By abstaining we’re giving George Osborne one less stick to beat us with. Not only that but cutting benefits is perceived to be popular with voters, and if we are going to be elected again then we need to do things that are popular with voters. And, anyway, abstaining on this vote is of less significance than working to amend the bill during the subsequent committee stage. We’re not really agreeing with the Government at all. But the symbolism of being tough on ‘welfare’ is important. It is a step on the way to getting re-elected in 2020.

But you can see the logic of those who argue Labour should have voted against. The bill is a direct attack on some of the poorest and most vulnerable members of society – stripping money from those who can ill afford to lose it – and if the Labour party isn’t prepared to stand up for them then who is? And what’s the point of the Labour party? We cannot be driven solely by what voters want. If voters wanted us to start publicly pillorying the indigent would we agree, just to be popular? If there was popular support for the reintroduction of slavery would the party line up behind a policy change to make it happen? Surely there are policy positions that should be supported because the principle is right, regardless of opinion poll results? Even if the Government’s majority means the vote on the bill would have been lost, the symbolism of standing up for the poor and oppressed is important. If the party rolls over and supports even the most heinous of the Government’s proposals what reason would anyone have for voting for it when we come to 2020?

Of course, the two positions are seeking to appeal to two different lost constituencies. They make sense from different perspectives. In this particular battle there is no obvious strategy that could appeal across the board, once the Labour party has accepted the battleground as it has been shaped by the Conservatives’ narrative. Just as George Osborne, presumably, intended.

It is surely only when Labour discover sufficient gumption to start to articulate an alternative narrative that the balance might begin to shift.

Here I wonder whether there might be something to be gained by looking upwards and outwards. Our politics is small. Even those issues that feature prominently are rarely contextualised. I seem to have spent a bit of time recently in the vicinity of strategic foresight activities. Analysis of the megatrends shaping society barely features in political debate. There are major changes under way: be it the ageing society; AI, robotics and labour market restructuring; the imminent arrival of the Internet of Things and total surveillance; urbanisation; resource scarcity; or the global shift in the economic centre of gravity back towards the East. Yet our politicians have little or nothing to say about this. Is that because they perceive voters are not interested? That seems hard to believe. Many of these issues are already affecting people directly and indirectly in their daily lives and people are only too aware of some of the challenges coming their way. But the full force of some of these social changes is yet to hit us. It is, however, just around the corner. It is likely, for example, that before long we are going to hit a major care crisis in a rapidly ageing society. If the Government puts the screws on immigration then the dependency ratio worsens further and crisis might well arrive sooner rather than later.

Perhaps many people feel politicians have nothing useful to contribute on these matters or are unable to do anything positive to help.

That, it seems to me, is where more thought is needed. It may well be that more confident and competent politicians could chart a route through what are going to be choppy waters. They could well find an audience for their message. But for such politicians to emerge they need to break out of the minute-by-minute existence of the Westminster bubble and have the time and space to appreciate the big picture. And what needs to emerge from broader reflection is some serious analysis, not the half-baked sloganeering we typically witness.

Are the resources there to provide the breadth of perspective needed? Quite possibly. Is there the inclination to move to working on this broader canvas? Only those in the Labour party know for sure.

But it might be one route out of the bind they’re in. It might give the party – and the people they are seeking to speak to – a new sense of direction.