For a few week’s I’ve been carrying a pdf of a working paper by one of the elder statesmen of economics – Richard Lipsey – around on my hard drive. Entitled Twenty five methodological issues in memory of Mark Blaug its focus is pretty self-evident. Today I had the opportunity to read it. I’m glad I did. 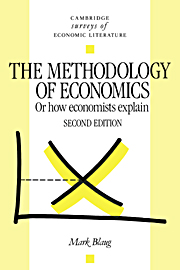 If economics students encounter a methodology book then it is likely to be Mark Blaug’s The methodology of economics. That may be the only discussion of economic methodology they ever come across. Even though it rather overplays the possibility of falsifying theories, it’s a great book. In fact, its adherence to a somewhat outmoded Popperian philosophy makes it a better read. It’s generally quite negative about much of modern economics. Blaug was rather disillusioned. Economists seemed rather wedded to a set of core theoretical principles and beliefs. They seemed less committed to the robust empirical testing of the implications of those beliefs, and the rejection of those beliefs if they fail the test. Theology not science. The book is good knockabout stuff.

Blaug died in 2011, hence Lipsey’s title. Lipsey’s short paper is a wide ranging overview of some key methodological issues and puzzles across both micro and macro. It’s very much in the spirit of Blaug’s writing. The core question is how do ideas persist – and not only persist but continue to dominate – in the face of demonstrable theoretical inadequacy or incoherence, or robust evidence that contradicts them.

After a brief discussion of falsification Lipsey makes the following statement:

In what follows, I distinguish two related types of policy advice. The first, which I call “theory based,” can be formally derived from a well-specified theory; the second, which I call “intuition based,” is not formally derived but is in the spirit of the theory in question and seems reasonable to those who accept that theory. A survey of advice given by economists shows that intuition-based policy advice is commonly given.

Methodological issue 2: How should one assess intuition-based policy advice when it is based on a formal theory that is not generally accepted?

I’d not seen the distinction drawn in this way before, but as he proceeds it is clear that he has in mind something akin to the fallacy of misplaced concreteness.

In framing this issue he touches on something that always troubles me when I kick off teaching micro in the public economics context, as I did last week.

We teach that a complete competitive market economy will deliver a socially optimal allocation of resources. The first and second fundamental theorems of welfare economics follow. We observe that the conditions under which this result is obtained are eye-wateringly strict. The Arrow-Debreu economy is nothing like any economy we’re ever likely to encounter in reality.

We tell stories about diminishing marginal returns and upward sloping supply curves. We then most likely tell some stories about market adjustment as a process rather than end state. Those stories tend to skate over the question of how the market moves if everyone is a price taker. The stories imply market power, but the conclusions rule it out by assumption. The gap that opens up has been known about for a long time.

We talk about market failures of various types and note that markets in reality are as likely to be monopolistically competitive or oligopolistic as they are to be competitive in the textbook sense. All these factors place a huge question mark over any general conclusion that markets will do the business in terms of maximising social welfare. That is perhaps most fully worked through in models with imperfect information. We might talk about the theory of second best – something that is, of course, close to Lipsey’s heart. This suggests piecemeal deregulation may move you further away from the social optimum, rather than closer to it. It suggests very careful analysis of the situation is required before policy conclusions are drawn.

But it is rarer to wind back and say: right then, hang on a minute, given all these real world imperfections, do the first and second theorem of welfare economics have any relevance to anything? After all, they are the theory-based justification for thinking that a market economy is a good idea and government intervention is distortionary. If we’re saying they’ve got next to nothing to do with the real economy then what theory-based justification is there for thinking that the policy of marketising and deregulating are a good idea in practice?

Blaug was pretty dismissive. He considered general equilibrium theorising “totally irrelevant: it has no empirical content and is incapable of answering any practical question that an economist might want to pose.”

Lipsey is a little more measured. He argues that economists may have the Arrow-Debreu result and the first and second theorem in the back of their mind when making policy recommendations, but what they are doing is making intuition-based recommendations. The intuition is that markets without distortions are generally better, even though that cannot be rigorously derived from any theory which aligns to a plausible characterisation of the real world. Lipsey poses a pertinent questions:

I’m not entirely convinced Arrow-Debreu looms quite so large on the mental horizon of the contemporary economist, but, nonetheless, the thrust of the argument is valid.

Lipsey goes on to explore a number of absolutely core issues such as the nature of competition (a process or an end-state), the nature of technological change and its role in economic growth, the significance of uncertainty – rather than risk – to real world investment decisions. On the macro- side he focuses on the “death” of Keynesianism declared in the 1970s and the subsequent search for the source of macroeconomic fluctuations on the supply side rather than the demand side.

Throughout the paper Lipsey argues that the empirical evidence largely counts against the way in which neoclassical economics conceptualises the various issues. He places alongside the neoclassical approach an evolutionary approach which he argues does a better job of accounting for the way in which real world economies function.

Lipsey’s argument is inevitably very broad brush. Some of the argument would perhaps have benefitted from a rather closer engagement with the current state of the relevant debates. They aren’t all debates that I’m familiar with, but where they are literatures that I know something about I felt that the current state of thinking is not quite as benighted as Lipsey portrays it.

Nonetheless, the paper raises some profound questions. And I don’t think a closer engagement with the current state of the debates would have undermined the key point he is seeking to make. His paper suggests the weight of evidence is sufficient – across the range – to conclude that conventional approaches to some foundational issues are fatally flawed. And that seems like fair comment to me.