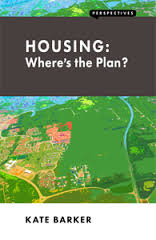 Kate Barker has been a significant presence in UK housing policy debate for a decade. Her report for the Blair government in 2004 crystallised the idea that we need to be building north of 200,000 houses a year to stabilize the housing market. And by stabilizing the market the report meant stopping real house price rises, rather than necessarily improving affordability. This idea has been floating about in the policy ether ever since, acting as a benchmark against which current policy is judged. Estimates of target housing supply have varied a bit since then as demographic projections and models get revised, but the brute fact is that actual housing supply has only exceptionally come anywhere close to hitting the sorts of numbers Barker viewed as necessary. Since the financial crisis new supply has been hovering around half what is needed.

Barker has returned to the fray with a brief book entitled Housing: Where’s the plan? The book focuses on private sector housing. Barker notes, rightly, that the social sector deserves a book length treatment of its own.

Brian has already offered his perspective on the book. I broadly agree with his assessment. Barker’s analysis is pitched at the right sort of level – we need to think broadly and systemically about the problem if we are to get any real purchase on it. Consequently simple solutions are unlikely to be adequate. The book doesn’t pin the blame on planning and move on. Barker reminds us of the powerful forces driving spatial development at the regional level. She concisely demonstrates the complexities and contradictions in the way we think about taxation in the housing market. Indeed, perhaps not surprisingly, the strongest component of the argument is the review of taxation and monetary policy. The book does a good job of conveying a sense of the interconnections within the housing system and the perverse consequences that can arise from intervention, however well-intentioned.

The book says plenty about problems with the land market. These are in part problems of rent-seeking in contexts of rapid growth: a problem that can be exacerbated by the planning system. But they are also a problem of fragmented land ownership and a public sector that has typically eschewed a strongly interventionist role in land assembly and preparation. We can think of a number of countries where it is public sector activity around site preparation that means housing supply is less buffeted by the vagaries of the economic cycle.

The book says rather less about the construction industry, apart from arguing that market volatility has deleterious impacts on industry capacity and that evidence for anti-competitive practices on the part of construction companies is limited. Some might wonder whether Barker, who is a non-executive director at Taylor Wimpey, is in a position to achieve sufficient critical distance from the interests of a sector that looks for margins in the region of 15% to justify getting out of bed in the morning.

While the analysis is wide-ranging, when it comes to solutions Barker’s approach is rather more incremental. That reflects a tempering of ambition in the light of perceived political realities. Yet, that doesn’t mean her proposals are uncontroversial. The headline proposal is to introduce capital gains tax on main residences, which is going to be fairly indigestible to most politicians.

The full menu is:

One thing that strikes me about this list is how much common ground is emerging among analysts and commentators regarding the policy changes needed in the housing market. There are surely differences of emphasis. For example, while Barker recognises the economic case for greater use of property taxes she is loath to advocate a decisive move in that direction and away from stamp duty. But, as with most other commentators, she will argue for the inefficiency of the slab structure of stamp duty and the desirably of the alternative slice structure.

Some commentators are undoubtedly seeking more radical transformation than others. But it feels to me like everyone is gradually iterating towards a rather similar set of prescriptions.

While this may be true, I’m not entirely sure of its significance. Because this thinking struggles to penetrate the political system. Or rather the biggest problem we face in dealing with the housing market are problems of political economy. Politicians might well recognise what needs to be done in theory, and that in some abstract sense the system would be better if they were done. But few are courageous to advocate doing anything of any great substance.

Firstly, the dysfunctions of the market and earlier failure to take decisive policy action have in themselves created sets of stakeholders who have an interest in keeping the system as it is. A paradigmatic example of Lowi’s argument that policy can drive politics, rather than the other way around.

Second, as Barker notes in the case of attempts to tax land betterment, history indicates that a key problem is lack of cross-party consensus and policy consistency. Market actors can frustrate government attempts to capture value simply by staying out of the market in the expectation that a change of administration will lead to a policy reversal.

Barker argues that we need cross-party agreement on a long term strategy. In addition, she draws the book to a conclusion by arguing that we need much greater strategic co-ordination across the breadth of government departments with influence over the housing system. That has got to be a sensible way forward. It will interesting to see whether the argument gains any traction.

Barker’s intervention is accessible and informative. It is a good place to start to wrestle with the issues.

And if you are in Bristol next month you can hear Barker offer her views on the reforming the housing market as part of this year’s Festival of Economics. She is taking part in a roundtable discussion alongside some bloke called Alex.