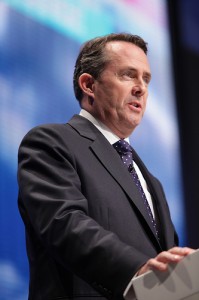 They’re not happy. The Tory Right are on manoeuvres. And the Lib Dems are in their sights. It seems that the grumbling and the finger-pointing are getting, well, a bit more pointed.

In yesterday’s Express Paul O’Flynn’s column argues: “not only is the Lib Dem presence in the Government damaging the country, it is now also doing potentially lethal damage to Conservative electoral prospects”. He goes so far as to conclude that it is time to end it all: “[t]he coalition is damaging Britain and damaging the Tories too. As the political leader of both, David Cameron cannot evade his responsibility for this any longer. He should bring it to an end”.

But perhaps the clearest statement of the Right Wing case against the Lib Dems was presented on Thursday in the Daily Telegraph by Liam Fox under the heading The Libdems are blocking Britain’s recovery.

Fox’s argument implicitly recognises that the Government’s economic approach hasn’t worked so far. But the problem is not, as many others have argued, that a policy focused almost entirely on austerity is self-defeating – that expansionary fiscal contraction is oxymoronic. The argument is not that we also need an active growth strategy. It isn’t to recognise that we are facing a catastrophic collapse in demand. It is, perhaps predictably, that austerity has not gone far enough. And that it cannot be pursued in isolation. Rather it needs to be accompanied by supply side reforms. As Fox puts it:

Deficit reduction without labour market reform is like driving with the handbrake on. Britain must compete in a global market with the fast-growing economies of Asia-Pacific, not just our increasingly sclerotic European neighbours.

The problem, from Fox’s perspective, is no just that Labour stood in the way of this type of reform. When it comes to realising a neoliberal utopia that catapults the UK labour market back to the Victorian era the Libdems are cuckoos in the nest:

In the Thatcher years, Britain hugely deregulated its labour market, only to see it silt up again over Labour’s 13 years in office. Inside the Coalition, resistance to deregulation largely comes from the Liberal Democrats.

Fox feels moved to give the Libdems a ticking off and a corrective:

Two things need to be pointed out to them. First, that they make up only one sixth – not one half – of the Coalition and must expect that Conservative economic ideas will be dominant. Second, that if the economy does not improve, they can expect a very unhappy date in 2015 with the voters, and their antipathy to labour market reform makes this more likely. The main reason for the Lib Dems’ participation in the Coalition is economic recovery – it would be bizarre if their intuitive Left-wing opposition to supply-side reform put this in jeopardy.

This article is a little bit of a puzzle to me. It is puzzle why Fox has made this intervention. Or why anyone would listen. His judgement has, after all, been utterly discredited following the Werritty affair. And there is no strong evidence that his knowledge of economics is any greater than negligible.

I guess it could signal the revival of a longer term leadership game within the Tories. Fox is, after all, Mrs Thatcher’s anointed one. If the Right think Cameron’s days are numbered then it’s time to start the rehabilitation of their favoured son, overlooking his apparent penchant for dodgy company and dodgy practice.

But, I mean, really. It is bad enough having Osborne in the driving seat when he clearly has next to no clue. We don’t need any more of these pronouncements on economic policy from politicians with little grasp of the subject matter:

We need to have a combination of increased labour market flexibility and spending cuts, to make room for employers’ tax cuts, if we are to create non-inflationary growth and improve the productivity and exportability upon which any sustained recovery will depend. Reform may be controversial, but it is the best route to prosperity. Failure could condemn the current generation of 16 to 24 year-olds to the sort of structural unemployment being suffered by their counterparts in countries such as Spain.

As the economic news gets worst the Right Wing deregulators get ever more shrill. We need to make the hair shirt ever more uncomfortable; the self-flagellation ever more severe. And yet the weight of evidence against their favoured course of action increases. The international disillusionment with the austerity solution grows.

The idea that excessive labour market regulation is the source of our economic problems has been repeatedly rubbished on the basis of the evidence. But like an ideological zombie it refuses to die. We should be grateful that the Libdems in Government are standing against this nonsense. It isn’t “intuitive left-wing opposition” that drives them. It is having some grasp of the nature of the problem and the sort of prescriptions that are likely to help rather than exacerbate it.

The problem is that the Right Wingers don’t really have any other tools in the toolbox. Plan A isn’t working. The only option is either to hold fast to Plan A or to push it even harder. The Government appears either too arrogant or too blinkered to change course. With every passing day it looks both more clueless and more crudely ideological. This refusal to change one’s mind as the facts change means the Government is increasingly being held up to ridicule by informed commentators internationally.

I, for one, hope these pesky Libdems continue to work to neutralise the dangerous nonsense emanating from the Tory Right. Not only should they stick at it, but hopefully manage to knock some sense into the arrogant posh boys before they do too much more damage. Earlier today on Twitter I saw Plan A described as #wreckonomics (h/t @TimDouglasHR). That seems entirely apt. We can only hope that the light dawns some time soon, before all we have left is wreckage.