Jeremy Hunt and the limits of credulity

David Cameron’s performance in the House yesterday in response to Labour’s urgent question about Jeremy Hunt seems to have split people. A large number of people thought he was an offensive and evasive bully. Tory loyalists thought he valiantly defended a minister whose reputation had been unfairly impuned.

This is just the latest installment in a very peculiar saga. 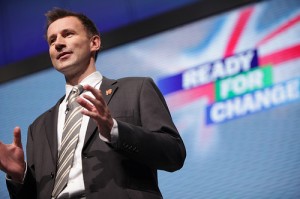 As John Rentoul reminded us on Sunday, there was never a golden age when Ministers were routinely doing the honourable thing: resigned at the first sign of impropriety – let alone illegality – in their department. But you have to ask quite what sort of evidence has to be in the public domain before Cameron would feel compelled to concede that maybe, just maybe, it was time for Hunt to go.

Cameron started his premiership by placing great emphasis upon adherence to the Ministerial Code as a mechanism to deliver higher standards of behaviour in Government. His refusal to refer the Hunt case to Alex Allan to investigate whether the Code has been breached looks hypocritical. The Code stipulates that Ministers are responsible for their Spads. Accept, for a moment, the Government’s argument that Adam Smith, Hunt’s Spad, had gone rogue and acted unilaterally. Then, on that basis alone, it is self-evident that Hunt is up the creek. He is incompetent, and responsible under the Code.

If, on the other hand, Smith acted with Hunt’s knowledge or on Hunt’s behalf then clearly Hunt is complicit. And up to his neck in trouble.

It is worth pausing, if only briefly, on what some of the emails placed in the public domain actually say. And then reflecting on what sort of situation would have to have obtained to conclude that Hunt is in the clear. It requires credulity to be stretched to absolute breaking point.

JH just called. He said that over the last few days he has been causing a lot of chaos and moaning from people at DCMS on our behalf. I should have an update later today.

The Government argues that JH doesn’t refer to Jeremy Hunt in person but rather his office and, more specifically, Adam Smith. That would be why Smith has now resigned.

We are therefore expected to believe that Jeremy Hunt knew nothing of the “chaos” being caused in his department by his own Spad, in order to further the interests of News Corporation. Or that Jeremy Hunt knew that his Spad was going around causing chaos on behalf of News Corporation but didn’t take action to discipline or sack him. Either way Hunt would appear negligent or incompetent.

Perhaps that is better than the alternative interpretation. That is, that Hunt, as the man charged with adjudicating on a multi-billion pound business deal, was not only failing to act impartially, but actively seeking to further the interests of one of the beneficiaries of his decision. If that were to be proven then one would presume that Mr Hunt is looking at being charged with more than incompetence.

The interpretation of events that would be of most help to Hunt is rather different. Some have hinted that Frederic Michel, the author of the emails, made it up. Most of what is reported to his superiors never happened. He was elaborating on his activities to make himself seem more dynamic, important and better connected in the eyes of his employers.

Yet this is a senior executive, not the deluded mailroom assistant. You’d have to presume that one doesn’t rise to be Director of Public Affairs for Europe in an organisation as ruthless as News Corporation on the basis of being an Olympic standard fantasist. Again, credulity is strained to the limit.

Lawyers who have examined the News Corporation emails released by the Leveson inquiry are pretty sure that they are, in themselves, enough to ensure that any decision Hunt had taken relating to BSkyB would have been quashed by the court (see the posts by Head of Legal and Jack of Kent).

Cameron’s insistence that Hunt’s activities be investigated by Leveson before a breach of the Ministerial Code can be determined seems bizarre at a number of levels. Quite apart from being outside Leveson’s terms of reference, it prolongs the media life of the saga. And to be subjected to forensic questioning by a barrister – without the option of blustering, hurling insults, refusing to answer the question, or trying to turn the tables on the questioner and paint them as equally grubby – must increase the risk of any dubious behaviour being exposed (as Jack of Kent has pointed out).

Cameron must be aware that the more the denials stack up the more it lends weight to Ed Miliband’s charge that he is trying to keep Hunt in place as a firebreak against more searching questions over his own behaviour and relationship with the Murdoch empire.

If you’re in a hole it’s not a bad idea to stop digging. If you keep digging then it leads people to  wonder quite how bad must be whatever it is you’re trying to hide. It’s inevitable.

This whole episode is as shabby as it is shambolic. And it does even further damage to the already heavily tarnished reputation of politicians. The taint of Tory Sleaze is back in a big way.

Some might suggest that we already have enough evidence to conclude that members of the Government are corrupt. I think that is going too far. We need to hold to the principle of being innocent until proven guilty. But the circumstantial evidence is mounting. And it is troubling. You can’t rule out more evidence emerging and a damning verdict being drawn.

This Coalition is perpetrating some deeply unpleasant policies affecting the poor and the vulnerable. But in the long run its casual disregard for, and debasement of, the core institutions of our society will no doubt prove just as deleterious for our welfare.