A couple of off-key incidentals from Cameron

The text of David Cameron’s speech today to the National Conservative Convention contains the following passage: 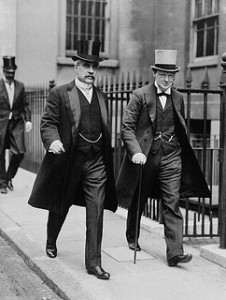 … We give people the tools to succeed. Yes, we believe self-reliance is a good thing, but that doesn’t mean “you’re on your own”. You can’t just say to the teenager who no one has ever believed in: “pull yourself up by the boot-straps”.

I know the leg-ups I got in life.

A loving family, wonderful parents, a great school and university.

Aspiration needs to be nurtured.

And this party has always understood that.

We want people to climb up through their own efforts, yes…

Great Conservatives down the generations have put those ladders in place.

When Churchill invented the labour exchanges that helped people into work.

When Thatcher fired up enterprise so people could start their own businesses.

That’s what we’re doing in the Conservative Party right now.

There are a couple of things about this passage that jar somewhat.

The first is his portrayal of the “leg ups” he got in life. The things he mentions are indisputably important. But the implication that it was simply a loving family, wonderful parents, good schooling and a good university that got him where he is today rather understates the strength of the leg up he received. He wasn’t in any sense born into a social and political elite. Not at all. And in no sense is there anyone in his family with connections to the aristocracy or royalty. Oh no. Not for a moment.

That isn’t a criticism of his background. But it is to suggest there are perhaps one or two additional relevant factors he might have mentioned.

A key theme of his speech was “aspiration”:

It’s what this party’s always been about – aspiration.

Helping those who really do want to work hard; and get on; and make a better life for their family.

Nothing wrong with that. But the issue of social mobility – or lack of mobility – is perhaps a little more intricate than he suggests.

The second false note is the reference to Churchill. Churchill is surely known as a great Conservative politician.

But Labour Exchanges were introduced by the Labour Exchanges Act 1909 under the great reforming Liberal Government elected in 1906. During this period Churchill was representing the Liberal Party, having crossed the floor from the Conservatives. William Beveridge, that other great Liberal reformer, was closely involved in the development of Labour Exchanges, working under Churchill.

It wasn’t until many years later that Churchill returned to the Conservative Party. Or “re-ratted”, as he himself referred to it.

I know it’s not like the Conservatives to claim credit for progressive and positively-received Liberal policies when it suits their purpose. So this must have been a simple historical confusion. Easy to do.