Slums as a housing solution 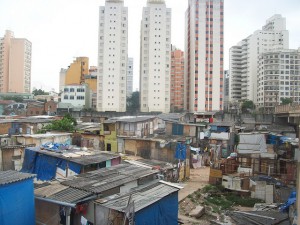 At the end of last week there was a bit of a furore generated by a blogpost published by the Adam Smith Institute. A young man called Theo Clifford argued that the solution to the British housing crisis lies in deregulation. That in itself is not, perhaps, an earth-shattering observation to find emerging from a libertarian think tank. Clifford, though, takes the argument a stage further than we usually see. He argues that Britain’s housing problem is an absence of slums. Social welfare would be improved if we were to deregulate so that housing consumers can “choose” poor quality, cramped, overcrowded and/or insecure accommodation, if that is the amount of accommodation that would satisfy their preferences.

This argument can be criticised from a number of directions. And it has been.

Many find the idea that slums can be styled as a desirable housing option to be deeply problematic. There is a reason why reducing slum living is a key UN Millennium Development Goal. It has been noted that yet again the ASI has advanced an argument that classical economics’ most famous thinker would find indigestible. The argument fails to recognise the diverse external effects associated with poor housing. It also seems to make somewhat questionable assumptions about who drives the regulatory framework and its precise content.

But here I want to put those broader arguments to one side.

It strikes me that raising the issue of slums might well be of some considerable significance in positive rather than normative terms.

In his original post Clifford argues that “The market desperately wants to provide houses people can live in at prices they can afford”. Apart from the fact that this is a peculiarly anthropomorphic approach to markets, it reminds us of an important point. Housing is unlike other markets inasmuch as it is difficult for people to opt out of the market if housing is expensive. So if people have low incomes relative to housing costs then landlords will be willing to supply poor quality property. And they will supply abjectly poor properties for those who have access to very limited resources.

And for all those who might consider relocating to an area of cheaper housing in search of a more adequate home there with be others who, as a result of family ties or access to employment or other opportunities, will try to maintain a toehold in a higher price areas. They will trade down the spectrum of property quality. Or they will give up on the possibility of living independently and move to sharing with friends, or strangers. We know all about beds-in-sheds and 26 people living in a single property in East Ham.

But I wonder whether we’ve thought about the dynamics of the bottom end of the market over the next few years in stark enough terms. The welfare reform agenda means that many households will have access to fewer resources. There has been plenty of modelling work that has demonstrated that many households will be unable to secure adequate housing across large swathes of the country. People will have to move to the periphery if they want to access accommodation of the type that had previously been affordable, with the aid of housing allowances, in higher housing cost areas.

But, of course, while some households will no doubt migrate to the North East or West Wales in search of housing of acceptable quality most will not. What happens then?

Is it inevitable that housing of types that we would currently deem unacceptable will become more prevalent? Will it increasingly be the rule rather than the exception? Is the future we are facing one in which slum housing features prominently, whether we think that is normatively desirable – as Mr Clifford does – or not?

I suspect the answer is only if there is a broader popular movement to force the government of the day not to that the easier – slum – option.