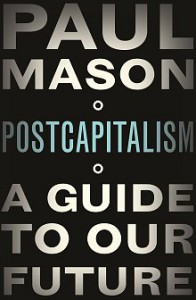 Paul Mason’s new book Postcapitalism: a guide to our future is a serious book with an ambitious agenda.

But you wouldn’t necessarily have picked that up from some of the early reviews. Political commentators from the centre and right were pretty quick to the pages of the Times or the Spectator to offer their dismissal. Even some reviews from the centre-left have been a bit tepid.

The book should, we’re told, be viewed as some form of regression by Mason to the driveling Marxism of his youth. The book indicates bankruptcy of the intellectual left. Mason’s argument that we may be seeing the beginning of the end of capitalism is taken to indicate his failure to understand the remarkable resilience of capitalism.

Quite a bit of the commentary on Mason’s book doesn’t do it justice. It isn’t entirely clear that some of those commenting on the book have done Mason the courtesy of actually reading what he’s written, or engaging with it seriously. Those who have taken time to do so, such as David Runciman in today’s Guardian, find plenty of interest. Which isn’t to say that Mason’s argument is unproblematic. Or, for that matter, that criticism isn’t justified.

Mason spends quite a lot of time looking back as a prelude to looking forward. Indeed, that is perhaps one of the weaknesses of the book. Although it is subtitled “a guide to our future” a relatively modest proportion of the discussion addresses contemporary developments, and even less explores “our future”.

Instead we are offered a wide-ranging discussion of the transition from feudalism to capitalism, attempts to understand the underlying dynamics of capitalism from a materialist perspective, and of the succession of arguments advanced by leftwing thinkers about the ultimate fate of capitalism and the transition to an alternative mode of social organisation – the journey to socialism by varying routes.

It must be twenty years since I spent quite so much time reading about the existence and interpretation of Kondratieff waves or the labour theory of value in classical economics. And I can’t say that I’ve ever spent a great deal of time up until now reading about the various factions in Marxist and Soviet political thought. Mason starts out using Kondratieff waves as a broad organising device. He considers there is merit in the idea that capitalist development is subject to long waves, but argues that the keys to the current stage of development – information and networks – have characteristics which fundamentally change the nature of economic relations. Analytical tools that are based on the notion of scarcity – especially mainstream economics – are, from Mason’s perspective, completely unsuitable for analysing an economy in which the key products effectively have zero marginal cost. He argues that monopoly capitalists are currently desperately trying to enforce property rights over information, but this is an approach that applies old thinking to new times. It is unsustainable in the long term. Mason sees several recent broad trends in the economy – notably neoliberalism and financialisation – in a similar light.

Mason sees a future in which the labour needed to deliver the products required to satisfy humanity’s needs drops dramatically as a result of advances in information technology. There will be a need for a basic income to ensure that those without work can subsist. But such an income may be a transitional measure. In a genuinely zero marginal cost world products will be free. The possibly of moving beyond a society based on scarcity and upon monetary relations presents itself.

While this is the heart of Mason’s argument the book roams much more widely, taking in issues such as climate change, demographic change, ballooning welfare spending, and mass international migration. Each of these contemporary social issues is taken to point in a similar direction: current models of socio-economic organisation are, at a profound level, unsustainable.

It appears that Mason is well aware of many of the pitfalls of leftist utopian thought. That, in part, is the reason for his extended review of previous attempts to think beyond capitalism. In some of cases he seeks to negotiate around the problem. In others he rather leaves things hanging.

I’m not sure it is necessary to buy into Mason’s argument wholesale to conclude that he is on to something. In fact, it is hard to buy into his argument fully because, while it is frequently engaging, it is frustratingly loose. The book pulls on a hundred threads and highlights a hundred issues but it doesn’t necessarily tie them together into a coherent and closely argued whole. I finished the book feeling I had as many questions as answers. Mason says very little about how we might get from here to there. He adds, right at the end, a brief discussion of “the 1%” and how they might react to this emerging postcapitalist paradigm. This hints at some important questions of inevitability and determinism. There are a host of political questions about feasibility, the forces of conservatism, and the rhetoric of reaction. It feels like there is much more to say here. I’m sure Mason is fully aware of this. I would like to have seen these issues worked through in more detail and more closely argued, perhaps by sacrificing some of the historical overview.

On the other hand, I think it is important to take care regarding the political content of Mason’s argument. Clearly Mason personally sees the move to postcapitalism as normatively desirable. That is what exercises his (centre)rightwing critics. Yet, it should, one might have thought, be relatively uncontentious to observe that capitalism may be a temporary phase of human social organisation. We know that there was a time before capitalism: social conditions arose which meant that feudalism withered, while capitalism blossomed. I can’t see that it is implausible to argue that something similar may happen again, whatever the cheerleaders for capitalism might fervently wish to see. The question is under what conditions might capitalism wither.  Or, looked at from a different direction, can it be plausibly argue that we currently face a constellation of issues which herald capitalism’s slow demise? That is Mason’s view.

It seems to me, in principle at least, that one could arrive at that conclusion whether or not one found the prospect normatively desirable. Mason views the prospect favourably. But the question then is whether he has let his utopian desire for the arrival of postcapitalism, or his dislike for capitalism as currently practiced, to undermine or overwhelm the rigour of the analysis. Some of the argument rests of the technical properties of particular types of goods and production processes. We might feel that Mason’s analysis of the transformational potential of info-tech is entirely spot on, but at the same time feel that he has overreached – or underspecified the argument – when he draws out its implications.

Yet the building blocks for his argument are mostly not hugely contentious. If you pick up any recent analysis of megatrends facing global society over the next few decades you will find a similar list of major social changes and shocks. We might then ask whether his analysis assembles those issues into a plausible narrative about where society is heading or under what circumstances society might head in one direction rather than another. This is the element of the book which is frustratingly under-developed. Mason doesn’t quite bring all the elements together and make them sing.

But Mason is absolutely asking the right questions. As I have blogged before, it is precisely these sort of broad social currents that politics needs to be engaging with. And there surely has to be space in the debate for those who are trying to join the dots in novel ways: bringing together the various global challenges into a single analysis to explore future scenarios.

If we don’t find the answers being offered here palatable or plausible then why not? Is the objection analytical? Or simply a predilection for the socio-political status quo? The latter is hardly a compelling basis for rejecting Mason’s position. Just because you don’t like something, doesn’t mean it isn’t going to happen.

I hope that Mason’s book instigates a serious debate about our direction of travel. Major social change is coming our way whether we have a public debate about it or not. It would be better to have had a chance to reflect upon how we might act, rather than react. Whether those social changes herald the arrival of postcapitalism is still an open question. But you couldn’t sensibly rule it out a priori.