An encounter with the Blogfather 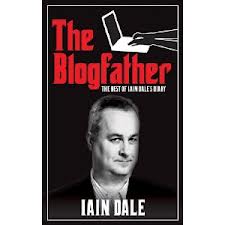 To coincide with the relaunch of Iain Dale’s Diary, one of the most successful UK political blogs of all time, Biteback have published a selection of Iain Dale’s posts from the period 2004 to 2012 under the title The Blogfather. The majority of the posts come from Iain Dale’s Diary in its original incarnation, which shut up shop at the end of 2010. A smaller selection of posts come from Dale’s contributions at Dale&Co, the megablog he launched in July 2011 and contributed to until it was discontinued in December 2012.

One point worth clarifying is that, while I was a contributor at Dale&Co, I wouldn’t claim to know Iain Dale. Indeed, we’ve only met in person once. And that was a very brief conversation in a corridor at the Brighton Metropole hotel a few months ago, while waiting for the Liberal Democrat Voice Blog of the Year awards to kick off.

A second point is more of a confession on my part. I only started to engage regularly with the political blogosphere at the tail end of 2010, so I only encountered Iain Dale’s Diary in the last couple of months of its existence. The same applies to Tom Harris’s popular blog And another thing …

So that means I know Iain Dale’s original blog largely by reputation. I came to the vast majority of the material in this book for the first time. And I’ve motored through it over the course of the last three days.

Dale’s writing style means that the journey was a pleasure. The posts have an easy intimacy – someone sat next to you in the pub or the coffee bar sharing the day’s gossip – that is truly engaging. You come to feel like you know him well. Even though I’m sure in reality you don’t. And despite the easy style many of the posts can convey a point sharply or provoke genuine reflection.

There was pleasure simply in being reminded of some events in recent political history that had slipped my mind, particularly when Dale is in a position to offer a gloss on an incident or a nugget of information that would not have been gleaned from the mainstream press at the time. Dale’s account, from 2009, of his youthful role in the downfall of the Dock Labour Scheme was particularly intriguing. There were one or two occasions when I disagreed quite sharply with the argument being advanced, but not perhaps as often as I had anticipated, given that high on Dale’s list of political heroes are Margaret Thatcher and Ronald Reagan.

The perspective from which the political posts speak clearly shifts over time. The earlier posts are the product of someone fully engaged with the Conservative party and an insider in the Westminster Village. The various instalments in the story of Dale’s ultimately unsuccessful attempts to enter Parliament as an MP unfold over a number of posts and a number of years. There is a sense of Dale moving from being close to the heart of the action in the Conservative party to being a still committed, but slightly more detached observer. This is in part because other activities and interests start to occupy more time. And it is in part because over the years, as the likelihood of be selected to fight a winnable Parliamentary seat diminished, Dale reconciled himself to the idea that his political ambitions are not going to be realised.

Dale is particularly good in reflecting upon some of the obsessions of contemporary Westminster politics and the media circus that surrounds it. His comments on the obsession with youth are spot on. If those over 40 or 45 years of age are considered too old to commence a political career, which seems increasingly to be the case, then politics is depriving itself of immense stocks of wisdom and experience. Similarly, his posts following David Laws’ resignation highlight the dangers of driving anyone with any sort of hinterland away from the public eye. Politics will be – is being – diminished if straight and straight-laced, monogamous, non-transgressors are the only people considered suitable for public office. It seems to me that if someone has been, since their teens, routinely managing their public and private persona simply in order to avoid any whiff of scandal and in search of political preferment then they are, almost by definition, rather odd. And if they don’t do that – and risk being pilloried by the press – then they are all too frequently driven to hypocrisy.

Dale makes some acute predictions over the course of the years. For example, he identifying early that Nick Clegg was a likely leader of the Liberal Democrats. He was early to call the seriousness of the financial crisis. He was relatively early to speculate about the frailties and failings of Gordon Brown. Subsequent memoirs from members of the Labour inner circle have laid out the problems in sometimes gruesome detail. But Dale is to be commended for including a selection of posts that indicate his success rate in political prognostication was rather less than 100%. Occasionally he was wide of the mark. Reading the runes is a hazardous business. And making those predictions public even more so.

I’ve no idea how well the balance of this selection of posts reflects the balance of the material covered in the blog, but it was considerably more personal than I had anticipated. Dale is at times searingly honest about personal issues or in laying out his feelings in response to events as they unfold. Sometimes that response is joy, occasionally it is anger – which he himself describes as “volcanic” – but more often than not it is sadness or grief. There is considerable lachrymosity. There is a sense of wistfulness – for times past and the passing of time – about many of the posts.

Reading the blog posts in book form offers a different type of experience to reading them online. For one thing it is not interactive or hyperlinked and you do not have access to the comments thread. But for another thing themes and obsessions emerge more clearly than when reading in daily bitesize instalments.

Dale’s support for West Ham United is well-known. As his tendency to get into the odd spat. But it is also clear that he is very conscious of his formative influences – in childhood, at University, via international travel during youth. His devotion to Margaret Thatcher, Audis and dogs (but not necessarily in that order) emerges clearly. He is a huge fan of Cliff Richard and Abba. He is scathing about the performance of frontline policing and not much more impressed with customer service at a number of well-known retailers and service providers. But he will give praise where he feels praise is due, including to political opponents. He is consistent in advocating and defending a position on personal liberty, equality and anti-discrimination that perhaps sits uncomfortably with the direction in which the contemporary Conservative party appears to be heading. This links to a concern about tendencies in the media to play the man rather than the ball when it comes to politics. A focus on problems and policies, rather than ad hominem attacks would be welcome. His stance on the need reassert the paramount importance of integrity and probity among politicians is admirable. It was an established theme of his writing that increased in salience in the aftermath of the expenses scandal. And he is a great one for lists.

One further recurrent theme is Dale’s admiration for Richard Nixon’s book In the arena. I have to confess this is a book that I’ve never come across before. But I will definitely be checking it out.

This book provides an enjoyable overview of Dale’s blogging to date. It will be interesting to see how the new incarnation of Iain Dale’s Diary evolves. I didn’t follow it last time. But I will certainly be doing so this time around.