Economical with the truth?

The agenda for this year’s Liberal Democrat Spring Conference carries the strapline Stronger economy, Fairer society. Given the parlous state of UK plc, and the deeply inequitable impacts of the Coalition austerity policy, the strapline touches on two of the biggest issues of the day. So the unwary among us might think that the discussion would have the economy somewhere near the top of the agenda.

Nothing could be further from the truth. In fact, the cynic might suggest there was strong circumstantial evidence to the contrary. The party leadership is doing as much as it can to avoid giving an airing to the issue of the direction of economic policy. 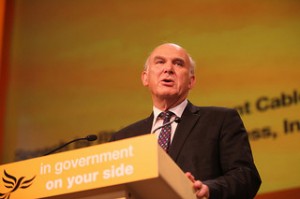 First, Vince Cable has not been given the opportunity to speak to Conference as a whole. Instead, he found himself on a less high profile platform: speaking to a Friday evening fringe meeting organised by the Social Liberal Forum. The meeting nonetheless attracted an audience of a couple of hundred delegates.

Vince has been on a bit of a media offensive this week, starting with his piece in the New Statesman. He is clearly developing an argument for a change of economic direction. He sees the balance of risks has having changed. The risks associated with the continuing flat-lining of the economy are now greater than the risks associated with slowing fiscal consolidation. So, among other things, he is advocating an increase in borrowing for investment in infrastructure, more specifically in construction.

David Cameron swiftly poured cold water on this idea in a speech last Thursday. The speech could broadly speaking be summed up as “the laddie’s not for turning”. The Government’s plans will stay as they are.

There is also the suggestion that No 10 has sought to portray Cable as a lone maverick. They have been aided in this by comments made by Nick Clegg over the last few days, and Danny Alexander’s suggestion that some ministers, including Cable, are engaging in fiscal nimbyism in order to protect their budgets.

Whether Cable is a lone maverick rather depends on the way you frame the assessment.

Clearly at the top of Government he is. His is a lone voice in publicly suggesting a modification of the strategy. His is also a lone voice in having a genuine grasp of economics. The only other person near the top of government who could make a claim to genuine understanding of economics is David Laws. But the economic perspective of the banker is not quite the same as the economic perspective of someone who has held senior positions in the real economy.

Yet if you reframe the assessment more broadly then Cable is not alone. Indeed, his view may well be in alignment with the majority of current informed opinion. If you look to Cameron, Osborne, Clegg and Alexander as your main inspiration for reading the economy then you may have missed the fact that outside the UK Coalition government you can find relatively few people who think what they are doing is entirely sensible. Indeed, if you look internationally you will find that the UK is being held up as a case study – as a salutary lesson even – about the self-defeating nature of austerity economics. For example, when the OBR chided Mr Cameron publicly for misrepresenting their views in his speech on Thursday they were drawing attention to the broad body of evidence that demonstrates the negative impacts of fiscal consolidation on economic growth.

I’m no particular cheerleader for Dr Cable, but he is a lot more in tune with broad thrust of current thinking than are the Quad.

So Cable was not given a high-profile platform.

The other facet of the non-discussion of the economy at Spring Conference was the fate of Emergency Motion 6 “Kick-starting the Economy”, developed by the Social Liberal Forum (SLF).

For those unfamiliar with the way this works, Conference Representatives are offered a range of Emergency Motions to vote on during Saturday morning. The votes are then tallied up and the motions that win the ballot are selected for debate between 9am-10am on Sunday morning. This year there were nine motions, all very worthy, on a range of topics.

At the last conference the leadership managed to sideline an SLF motion on the economy through a classic example of agenda-setting. This time the Emergency Motion was there alongside the others for delegates to vote on. So it had a chance.

EM6 was a wide-ranging motion calling for more public investment funded by borrowing, a commitment to build more housing, increase lending to SMEs, resisting pressures to commit to public spending cuts after 2015, and a mansion tax. Some might argue this breadth was its strength: this is the sort of action that would be needed if we are serious about kickstarting the economy, rather than waiting for austerity to work its magic. In the end it proved its procedural undoing.

Federal Conference Committee decreed that two EMs would be debated between 9am-10am, except if EM6 came top in the ballot. It is such a substantial motion that it was argued to need the full hour. If it came anywhere other than top then it would be passed over and not debated because there was only an hour available.

It may well be true that EM6 needed an hour to be debated properly. But this was also a good tactical argument to adopt if you wanted to keep the motion from being debated at all. Anyone who has any sense of the mood of the party over secret courts would know that EM2: “Continuing our opposition to secret courts” was odds-on favourite to win the ballot.

And so it turned out. EM2 was first. EM6 was second and therefore passed over.

There was one final act in today’s drama. There was a move to suspend the Party’s standing orders in order to allow EM6 to be reinstated and the rest of the Sunday agenda  be rearranged so as to extend the session for emergency motions to one and a half hours. Conference agreed to a mini-debate on whether this should happen. It then came to a vote on suspending standing orders. The vote was close. A very slight majority of conference representatives supported suspending standing orders and allowing a debate on EM6. However, it did not achieve the two-thirds majority required to be carried.

While this mini-debate was going on the following tweet passed through my timeline:

Interesting to see leadership are whipping people to come in and vote down attempt to suspend standing orders. #ldconf #ffs

If EM6 had been debated then there is a good chance that it would have been passed. And that would have caused a whole heap of trouble for the party leadership. Nick Clegg and Danny Alexander would appear to be as wedded to Plan A as David Cameron and George Osborne. And harmony at the top of the Coalition would appear to be more important than debating policy within the party.

That much of the world of economics thinks current policy is doing real damage to the economy and that the balance of risks has, indeed, changed would seem to be an irrelevance. And rather than face the fact that we could well be heading down the wrong track we’d rather avoid talking about it altogether.

No one envies the Government the task of dealing with the country’s economic problems. And it is true that they have shown some flexibility – even while maintaining that they are doing what they were intending to do all along – but there is a dogmatism to policy that is entirely misplaced. It is surely likely to be politically costly to change direction. But the human cost of not doing so will be considerable.

It is clear which cost the Government is intent on minimising. My sense is that the party increasingly thinks that is the wrong choice.

This post at Not the Treasury View, published today in response to David Cameron’s speech, provides an overview of the arguments.