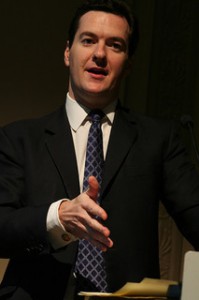 My plan was to write something following up last week’s Autumn Statement. But what with having to do other things – work and that – I’ve not had the chance.

In the interim there has been bucketloads of analysis. So I’m not sure there is more to say on the substance. All right thinking people are agreed that George Osborne, along with frontline politicians in the other parties, is suffering from what Gavin Kelly has christened a “candour deficit”. No one is being honest with the electorate over the scale of the cuts being planned. And, equally importantly, no politician is being honest about what cuts on that scale imply for unprotected services. Rick illustrates the point beautifully drawing on data from the OBR, the IFS and elsewhere (here and here).

Even Fraser Nelson is calling Osborne out for the sleight of hand he used to claim that the Government had cut the deficit in half. Fraser Nelson. Crikey!

And that illustrates the overarching impression that one takes away from the political debate on the economy over the last few days. It isn’t just the size of the deficit and the cuts to come. It is the Government’s portrayal of the financial situation it inherited, the success of its deficit reduction efforts, its adherence to a plan, its claims that its economic “competence” accounts for Britain’s current economic performance, its claims regarding the consequences of a Labour government.  None of this would constitute a “true and fair” view of the situation.

George Osborne’s comment piece (£) in yesterday’s Sunday Times was a spectacularly, teeth-grindingly awful example of the genre. It set up a choice between “competence and chaos”. It ridiculed both Labour and the Liberal Democrats. Despite its talk of setting out “two important truths” it was rather difficult to identify bona fide truths among the swirl of spin. It was pretty much offering jam today and tomorrow, and that billions more could be removed from government spending with barely a negative effect on anything:

This is all achievable – and is perfectly consistent with a well-funded NHS, investing in science and transport for the future and delivering lower taxes for hard-working aspirational people. How do we know? Because that’s what we did last week.

The tone of the public pronouncements from the Liberal Democrats isn’t much better, apart, of course, from the extracurricular interventions by St Vince of Cable. After Nick Clegg’s outing on the Marr show, today Danny Alexander was giving it a bit of differentiation. The Liberal Democrat economic plans are less sadistic than the Conservative version, but in closing Alexander’s Telegraph article observes:

In coalition, we have helped save Britain from economic chaos and ushered in a strong recovery. The real danger of such chaos in future comes from a Labour Party that would repeat its disastrous mistakes, and a Conservative Party that wants to give Britain austerity for ever and destroy our place in our largest market.

Clearly there are parts of this statement that are plausible. But the whole “economic chaos” line is bogus and the “ushered in” line is ambiguous to the point of obfuscation. What does it even mean? As I believe the young people are wont to say.

In response to the lines taken by the Coalition parties Labour largely blathers, but it isn’t scoring a great deal higher on the candour index.

Chunks of the mainstream media then seem to accept these sorts of statements at face value.

They might focus on the proposed cuts and speculate over whether Osborne is just striking a political pose which he never expects to have to deliver on or whether he is serious is taking state spending on public services back to the 1930s. Commentators claim that no sensible person thinks cuts on this scale are achievable. They will destroy vital infrastructure, impair the productivity of the UK economy and, more apocalyptically, throw the existing social order into question. So they won’t happen.

If only politicians would recognise that public and private are complementary then the obsession with reducing the size of the state would be seen for what it is – the outworking of an ideology that seeks to further a particular class interest. Type of thing.

On the other hand, it may be that Osborne isn’t the sort of person who is inclined to see this kind of sense. And is just the sort of person to pursue a strategy that is the outworking of an ideology that seeks to further a particular class interest. So, he’ll have a damn good try, even if in the process he demonstrates yet again that austerity policy is self-defeating.

But it seems that fewer in the media have the appetite to challenge the background assertions that are made in these debates. No one in the mainstream media is, for example, challenging the assertion that large dollops of austerity is the right way forward. Even though organisations such as the IMF have conceded that they got it wrong and that in many instances fiscal contraction after 2010 was inappropriately harsh.

A more accurate narrative of the last four years would be that the Government promised both fiscal austerity and a rebalancing of the economy away from a reliance on private debt and financial services. It backed off on fiscal austerity as soon as it became apparent that it was killing growth, and the UK economy subsequently started growing again. The Government missed its own fiscal targets by a mile. Indeed, it delivered a rate of deficit reduction not dissimilar to that which Labour had proposing, and which the Conservatives back in 2010 condemned as certain to bring the country to its knees. But, in spite of evidence to the contrary, the Government continues to claim that it has stuck to its long-term economic plan all along.  At the same time it pretty much gave up on rebalancing the economy, reforming the housing system or the financial markets.

The biggest economic challenges we face are low productivity, low wage growth and the transition to a low wage economy, but the Government has little to offer in those areas. So in the absence of positive structural reform, the economy is experiencing consumer-driven growth fuelled by private debt and house price growth, just like the period that preceded the 2007 crash. The Autumn Statement projections for increases in private indebtedness were frankly hair-raising. The current model of economic growth is unsustainable. But we knew that seven years ago and swore that things had to change.

It is the hypocrisy of it all that is so tiresome. The whole thing has got an Emperor’s New Clothes feel about it. We await the intervention that will bring the whole discussion to its senses.

But it may be that such an intervention will never arrive. I am reminded of Chris’s post on the Economy as Hyperreality. The debate over the economy occurring within the Westminster bubble may now have become completely detached from anything that is happening in what the rest of us would recognise as the economy. The Westminster bubble debate drifts away and becomes self-sustaining. None of the positions taken in the debate bear any relation to anything other than the other positions taken in the debate. Fabrication and representation set against fabrication and representation. The everyday “reality” as it is experienced by the rest of us has ceased to be relevant to the debate.