The value of planning 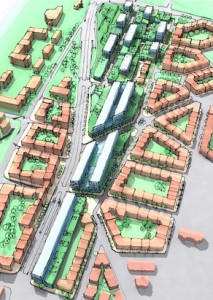 Earlier this month there was a small flurry of comment in the media about the impact of planning on house prices (for example, here). The question was why house prices in Britain have grown faster than most other countries over the last forty years. A big chunk of the answer was “planning”, in the form of development planning and development control. If only the planning regime had been more lax more houses would have been built and the escalation in house prices would have been attenuated. The commentary was triggered by the imminent publication of a paper in the Economic Journal by Hilber and Vermeulen, which in turn is – I presume – a version of a paper that has been available as a SERC working paper for a couple of years.

This is the latest in an intermittent series of papers, largely generated by economists based at LSE/Reading, making similar sorts of points. The headline message is that the planning system is at the heart of the British housing supply problem. It is the primary cause of our sluggish housing supply response.

The “planning is the problem” position is making most of the running in this debate, and seemingly is never far from the heart of policy thinking.

If you have been reading this blog for a while you will know that it is a position that I don’t have a huge amount of sympathy for. It is too simplistic. It leaves out consideration of the influence and divergent interests of the range of stakeholders in the housing supply process.

Back in June, partially as a counter to this dominant strand of thinking, a report entitled The Value of Planning was published by the Royal Town Planning Institute. I’ve only just had a chance to read the report properly.

Publication through the RTPI might elicit a sceptical response – after all they would say that wouldn’t they? But that would be unfair.

The report is written by David Adams and Craig Watkins, two of the UK’s foremost researchers on planning and housing markets. The report synthesizes a number of arguments that they have been developing separately and together in the academic literature for a while now.

The argument isn’t so much an uncritical hurrah – ‘planning is great’. Rather it is that our present state of knowledge is such that it is hard to draw very strong conclusions on the net benefit of our planning system. That is both because the key terms – planning and value – can, and are, interpreted very differently and because on many relevant dimensions of the issue we have relatively little or no evidence. The authors do not dismiss out of hand the LSE/Reading econometric work on the impact of planning. Rather they note that economists working in the mainstream tradition adopt a relatively narrow conception of planning, a misleading characterisation of the housing construction market, focus upon on costs and have no corresponding estimates of benefits, and deploy simplified indicators in order to operationalise the sort of quantitative empirical analysis deemed rigorous within the field. The net result is that Adams and Watkins counsel extreme caution in interpreting the sort of results to emerge from this type of analysis. It is highly likely that the negative impacts of planning are substantially overstated. Indeed, if the costs and benefits could be appropriately weighed, the net impact of planning may not be negative.

Adams and Watkins argue that economic analysis in the mainstream tradition has its place, but that if we really want to understand what is going on in the housing supply system we need to look beyond simplistic arguments about the way in which ‘planning’ interferes with the working of perfectly competitive markets. We need to recognise more institutionally-oriented analysis that highlights the complex of social actors with varying motivations within the housing supply system. Even if development planning were eradicated entirely there are good reasons for thinking that housing supply would not suddenly expand dramatically.

Adams and Watkins argue for a pluralist research agenda. They point out that drawing on different traditions will allow us to illuminate different dimensions of the issue:

They go on to set out an ambitious research agenda. Adams and Watkins are aware that this sort of pluralist approach raises all sorts of ontological and epistemological questions, but a report of this type is not the place to examine them in detail. The report then clearly identifies the areas that it would be desirable to investigate further in order to form a rounded view of the value of planning.

Of course there is a real risk that policy makers are immune to this wise counsel. Instead they continue to be tempted by the quicker fixes offered by those whose starting assumption is that property markets will do perfectly well on their own, if only the planners would butt out.

If only it were so simple.

The Value of Planning is a good place to start if you want to understand why it isn’t.