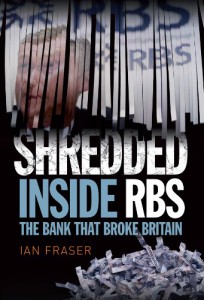 I’ve just finishing reading Ian Fraser’s Shredded. I started it when I was up in Edinburgh last month, appropriately enough. But other things intervened and it was only over the bank holiday weekend that I got the time to sit down and read the second half.

The book tells the fascinating story of the growth and subsequent implosion of the Royal Bank of Scotland. Fraser has produced a genuine page turner from material that is, on the face of it, pretty dry.

Quite a few elements of the story are now reasonably familiar – particularly relating to the Fred Goodwin era. I have to admit that I am only an intermittent watcher of what’s going on in the world of banking and finance, so it was good to have the developments laid out systematically and largely chronologically. It was particular interesting to learn what has been happening in more recent years, after the bank found itself pretty much nationalised. Like anyone who pays attention to the news I am aware of the massive fines regularly being handed to the bank for past crimes and regulatory infringements, but I wasn’t entirely up to speed with what was happening in terms of its restructuring or the way in which it has interacted with government.

The story of the rapid growth of RBS after 2000 is pretty hair-raising. But I found the story of what happened after 2008 under Stephen Hester, with the aim of bringing the bank back to profitability, no less alarming, in the sense that behaviour did not change dramatically as a result of lessons learnt the hard way. Indeed, there is the suggestion – although disputed by the bank – that aspects of its behaviour deteriorated after 2008 as it attempted to improve its own financial position at its customers’ expense. Entirely coincidentally, but almost as if to underline the point, RBS finds itself in the news again this week accused of selling mortgages without doing the necessary affordability checks, long after it was supposed to be cleaning up its act.

Although Fraser’s book is entitled Shredded – in reference to Fred Goodwin’s nickname ‘Fred the Shred’ – it does not lay the blame for the RBS debacle at the door of Goodwin alone. Quite the opposite. In the last chapter Fraser reviews the role played by a range of actors in the drama. It most definitely isn’t only the inadequacies of the other senior executive and non-executive members of RBS that are in the frame. Politicians, regulators, central bankers, those who set accounting standards, hedge funds managers and other institutional investors are all found to have acted in ways that ultimately contributed to the fall of the bank.

It is this discussion of culpability that is the most interesting and concerning component of the book. Or rather it invites us to reflect upon the question of whether, given this analysis, enough has changed to stop this sort of sorry tale repeating itself in future. The strong sense you get from Shredded, but also from elsewhere, is that there has been insufficient change at a fundamental level for us to have any confidence that history won’t repeat itself.

The focus of much policy and public indignation has been on the perverse incentives created by bankers’ vast remuneration packages rooted in bonuses that rely upon short term performance. The temptation for staff individually or collectively – including through cross-organisational conspiracy to fix markets – to do anything and everything, however unethical, to boost the numbers is no doubt substantial. And it is an issue that it seems difficult for policy to tackle. This is clearly one part of the jigsaw. But it is not the only part.

The role of hedge funds in bringing pressure to bear upon the management of an organisation, including threats of hugely expensive legal action if their favoured courses of action are not pursued, emerges as one important element of the saga of the disastrous acquisition of ABN AMRO by RBS. I’m not sure the power of hedge funds has noticeably diminished since then.

Banks can and do face strong incentives to cut corners in order to meet City expectations regarding organisational financial performance. When failure to meet expectations can lead to investors and analysts forming the view that an urgent change of management is required then the temptation to take the low road in order to preserve one’s job no doubt, for some, becomes hard to resist.

It seems to me that RBS, in particular, faces a circle that cannot easily be squared. The Government wants it to be a less racy, less risky, more solid performer in the service of the UK economy – with less involvement in the areas of finance where the big money can be made. That would tend to imply lower profitability, potentially in perpetuity. But, on the other hand, reprivatisation requires higher profitability to improve the share price, and the City expects performance that it judges appropriate to a bank of this scale and type. If that performance is judged relative to other organisations – which in part it is – then in order to keep up the bank comes under pressure to embrace whatever sorts of risky activities others are engaged in to generate returns.

Shredded finishes with an apposite quote from Martin Wolf. In the middle of last year, in a piece discussing the report of the Independent Commission on Banking, Wolf observed:

But the strong impression one gets is that the political resolve to see such reform through is lacking. The question is why.

There was period, post-2008, when the public anger was directed at bankers. But much of the anger was rather diffuse. ‘Bankers’ in general covers a multitude of possibilities, and many of them are doing relatively low risk, useful things. Where anger alighted on a specific complaint it was the fact that the public was paying the price of the bankers’ greed, dishonesty and folly through enforced austerity. In some senses, the lack of focus to the public’s anger is understandable because so much of the bankers’ greed, dishonesty and folly was non-transparent or covered up. Indeed, some very expensive lawyers have been employed to ensure that it remains opaque. It is also, in part, that much of the financial misbehaviour involved is on such a stratospherically large scale it is hard to comprehend. The consequences of Libor manipulation, for example, are so intricate and far-reaching as to almost cause a mental error message to start flashing.

Yet, Shredded lays out clearly the height, depth and breadth of the misdeeds at RBS. I find it hard to believe that anyone could read it and not find themselves getting angry at the irresponsibility and incompetence on display.

It is also surprising that the sheer volume of news reports highlighting fines for banks’ misconduct or each new investigation exposing a further case of market rigging for the benefit of traders doesn’t rekindle the public’s anger. The failure to distil this catalogue of financial dishonesty and venality into focused public outrage partly explains why the perpetrators go largely unpunished, politicians do not feel pressured into more far-reaching regulatory reform, and Mark Carney is not shouted down or laughed out of town when he suggests that allowing financial services to expand in scale to five time the country’s GDP would be sensible and desirable.

Of course, it is more than just a lack of focused public outrage. There are important questions about, for example, the extent to which the political system has been captured by financial interests. Here we start to move on to issues that fall more clearly within the purview of another book I’m reading at the moment, Calomiris and Haber’s Fragile by Design. But that is probably the subject for another post.