Do political parties make any difference? 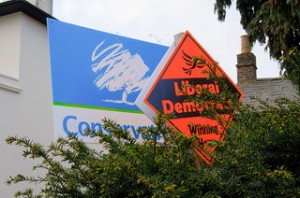 On the other hand, there are plenty of people who take a more jaundiced view of politics: they’d argue that “they’re all as bad as each other” and it doesn’t matter who you elect the government always get in. The more recent revival of that argument would be that all the main political parties are signed up to some version of hegemonic neoliberalism, so it doesn’t really make much difference who forms the government – you’re going to get some version of the same marketising, privatising, deregulating and impoverishing agenda.

Among those who study politics and policy rather more theoretically there is a somewhat more nuanced debate on the topic. You can find views on a spectrum running from accounts of great leaders rising above their circumstances to reshape the world for the better to those who believe that politics is simply an epiphenomenon that does no more than deliver the policy agenda functional to deeper, dominant socio-economic interests. And most points in between. If you’re not careful you soon find yourself entangled in the thicket of state theory, reflecting on whether social institutions are objective, subjective or entirely discursive, or scratching your head over where to strike the explanatory balance between structure and agency.

A paper by Hampshire and Bale, published in West European Politics, has recently appeared online. It offers another take on these issues using coalition policy on immigration as the case study.

The authors examine how the two coalition parties’ manifesto pledges translated into the Coalition Agreement (broadly, a Conservative win), and how this translates into policy (broadly, a Conservative win). They note that the Coalition’s political aspirations, as set out in the Coalition Agreement, were a clear break with the open-door policy of New Labour. So at stage 1 political parties seem to matter. But that is to say nothing about what gets translated into concrete policy at stage 2. Here they note that the move from the Coalition Agreement to the specifics of an immigration policy will be mediated by a number of influences, including the institutions of the governmental bureaucracy, inter-departmentalism, organised lobbying and intra-coalition tensions.  The authors’ view is that when we get to stage 2 political parties can make a difference, but in complex and perhaps less than predictable ways.

The broad picture to emerge from the immigration case is that the Home Office has largely been able to rebuff the BIS desire for a more liberal policy. In part this is because of the “deeply entrenched departmental pecking order” on matters of immigration. Instead it has been able to pursue its populist policy of seeking a reduction in net migration. While this may have been represented as a tension between the Coalition partners – embodied in May versus Cable – it is difficult to disentangle the political angle from diverging inter-departmental agendas: BIS is seeking to promote what is good for the economy, the Home Office is seeking to do what is popular with certain segments of the electorate, even if there were compelling evidence that it is bad for the economy.

Perhaps more interesting are the authors’ observations that lobbying had a differential impact upon the development of the policy as it moved towards implementation. So you need to look at policy at a higher level of resolution to understand what is happening. Lobbying on behalf of employers, with the aim of reducing the proposed labour market restrictions on migration, met with considerable success. In contrast, lobbying on behalf of the Higher Education sector to ensure that the migration cap did not affect international students was comparatively unsuccessful. And lobbying by NGOs in relation to tightening up rules over family migration were entirely unsuccessful. This is ascribed not only to the leverage that the various lobby groups could bring to bear on the Government but also to the professionalism of their lobbying effort. The HE sector didn’t achieve its objectives in the way that the business community did in part because it is just not as effective at lobbying.

The take home message from the paper is, for me, methodological, and argues for the need for more comprehensive analyses:

Our case reveals limitations of scholarly approaches to immigration that focus on one or the other of the factors outlined … political economists on employers and other lobby groups; party scholars on political parties; and institutionalists on functional and bureaucratic conflict. In the search for parsimonious explanations a lot of non-trivial complexity gets lost. Each of the above approaches has considerable merits, but can provide at best a partial picture of how politics shapes … policy outputs. (p18)

The paper contains a passage which, while a small part of the immigration policy story, is interesting from a Liberal Democrat perspective. Hampshire and Bale argue that divergent departmental agendas and a Home Office able to prevail over others on immigration is only part of the story. There is also something distinctive about how Liberal Democrats “did government” on this issue:

… even their inexperience, their supposed ineptitude at playing the governmental game, and their relative lack of resources … can only take us so far. What also matters is their sense, as a political party trying to learn from the past and thinking about the future, of what may benefit or damage them electorally. In this respect, some Liberal Democrats have been secretly relieved to find themselves only occasionally playing the role of the coalition’s ‘progressive’, if largely ineffectual, conscience. As one Liberal Democrat advisor told us, the party’s immigration commitments did not go down well during the 2010 campaign, and there was considerable relief among some of the leadership that they were able to drop them with comparatively little fuss as part of the coalition agreement. Given the state of public opinion on the issue, there is so little electoral advantage in adopting permissive immigration measures that a degree – but no more than a degree – of resistance to Conservative-led restrictions arguably allows the party to pacify its liberal activists while remaining sufficiently under the radar as far as most voters are concerned to avoid the kind of backlash that arguing loudly for, let alone actually implementing, truly liberal policies might create. (p16)

I can image that activists will be gratified to know that key to the party’s tactics was making sure they were “pacified”, without the requirement of actually standing up for anything liberal. Equally I can imagine this is just the sort of thing that sets alarm bells ringing among those in the party who are on the lookout for – further – signs that the leadership has largely rejected the idea that their primary mission should be to press for the implementation of the party’s agreed policy, or at the very least liberal principles, on all occasions.

Whether that is a realistic perspective on how coalition government can ever work is a rather bigger question.