Emergency wealth tax, eh? I wonder whose bright idea that was. 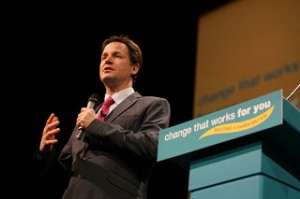 Clearly, as a Liberal Democrat I’m generally in favour of taxing wealth rather than income where possible, particularly unearned and property wealth. So I’m in favour of wealth taxes as part of a coherent package of reforms to the tax system.

And we should clampdown hard on tax evasion and do what we can to simplify taxation systems so that tax avoidance becomes more difficult.

Equally, I’m in favour of progressive taxation and the idea that those with the greatest resources should be expected to make a serious contribution towards dealing with the budget deficit. The superrich, many of whom are implicated in causing the financial crisis, have profited very handsomely from the state support provided to stop the financial system imploding. Their extraordinary wealth has grown dramatically over the last four years. For them to start bleating that they’ll leave the country if that wealth is taxed is outrageous. That is not the politics of envy. It is simple fairness.

We should pay absolutely no heed to arguments that wealth taxes should be avoided and higher rates of tax should be lowered because these adversely affect the entrepreneurs who will ride to the rescue of the British economy. We should recognise that most true entrepreneurs and small business people. who will generate much needed jobs, never get within touching distance of the highest rates of income tax. We should absolutely be encouraging genuine entrepreneurship. But if taxes on the superrich – premier league footballers, hedge fund managers, private equity vultures and other wealthy but generally unproductive members of society – are high then I wouldn’t lose too much sleep over it. That would not be the politics of envy. It would be trying to restore some semblance of sanity to our systems of remuneration.

And we should not entertain any arguments that rest on the zombie economics of trickle down. We now have plenty of evidence that further enriching the rich does not benefit the middle and working classes. The “rising tide lifts all boats” argument that was popular in the 1980s has been shown to be vacuous. The main achievement of those countries that swallowed this line of argument is a massive increase in social inequalities. The rich have got richer. And they’ve kept the money. And that has had hugely detrimental consequences for society and democracy.

So broadly speaking wealth taxes are good and getting the rich to pay their share is fair. This is not a revolutionary position for the Liberal Democrats.

But why come up with this proposal now? Why no detail? Why only a temporary measure? And is this being proposed as a Liberal Democrat policy or as a policy that we’re expecting the Coalition to implement?

If a wealth tax had been proposed as part of a budget designed to restructure the tax system – as a compensating mechanism for the cut in the top rate of income tax – then that would at least have looked plausible and part of a plan. The trouble with advancing this idea now, accompanied with a rhetoric of expecting the rich to contribute more, is that it doesn’t sit well with having just voted through measures that mean the rich pay less. As critics have not been slow to point out.

We risk policy looking incoherent. Which it does. And we risk being accused of proposing something that is not credible. Which it isn’t.

It has been argued that George Osborne would have gone for a version of the Mansion tax in the budget in exchange for taking the higher rate of income tax down to 40%. But this was vetoed by David Cameron.

What makes us think that Nick Clegg proposing a wealth tax, even a temporary one, is going to be warmly embraced now? Since the Budget we’ve had the Lords reform debacle and the tit-for-tat of the boundary change sinking. Coalition relations have chilled considerably. What makes the Liberal Democrats think the Tories are going to embrace a policy that goes against just about every one of what they are wont to call their “principles”? Of course they’re not.

The thrust of the Clegg argument would appear to be that the wealth tax is going to be a requirement for supporting a further £10bn in cuts in welfare. Before the summer break we were talking in terms of further cuts in welfare budgets on this scale being a step too far and sufficient to split the Coalition. Now we appear to be looking to do a deal.

But I wouldn’t be hugely optimistic that there is a deal to be done. If the Coalition experience so far has taught us anything it is that superficial agreement at stage one will be followed by a shafting at stage two. The £10bn in cuts to welfare budgets are no doubt heading down the pipe. Yet, unless a wealth tax were implemented in advance of any further welfare cuts then I wouldn’t trust it to be implemented at all. Personally I think the logistics of designing and implementing a wealth tax are such as to rendering the timings implausible. If we’re not careful the welfare cuts will be implemented, doing real damage to the lives of people barely able to survive from day to day, while civil servants are still doodling on the drawing board for the design of a wealth tax, which then never materialises.

So that leads to two further possibilities.

Nick Clegg talks in terms of differentiation within the Coalition and appealing once again to the undecided voter. That may be part of the thinking. But I think it is naïve. If the party high command think a temporary wealth tax will win back the waverers then they really have no appreciation of the virulent hostility to the party that there is out there – the long list of “betrayals” that people, rightly or wrongly, lay at the door of the Liberal Democrats.

Mr Clegg might dismiss such critics as “leftists” that the party has given up on and lost forever. We don’t – or at least he doesn’t – care what they think. But I’m not as confident has he is that there are vast swathes of uncommitted centrists willing to sign up to the cause to replace the lost leftists; willing to overlook what appears to the incautious eye as the perfidy of the party. Trust is not a left-right issue. And trust is long gone.

So that leads to the conclusion that this announcement is primarily designed as salve for the party faithful. It allows Clegg to differentiate. It allows him to make the case that the Liberal Democrats are much more committed to fairness in taxation than the Tories.

And that might be enough to get him through what could otherwise be a very sticky Conference. At Conference he could fairly be accused of failing to deliver any of the constitutional reforms that he was seeking. Those reforms were seen as the qui pro quo for supporting the dastardly Health and Social Care Bill. It was obvious many months ago, even to a halfwit like me, that the Tories were going to say thank you very much for support on the HSC Bill and then shaft the Liberal Democrats on Lords Reform. But for some reason the Liberal Democrats thought the Tories might play fair. Nothing was learnt from the AV referendum.

So the prospect of a wealth tax might be enough to salve the wounds inflicted on the activist base.

But I sort of hope it won’t be. Because we ought to be learning lessons by now. Fine words butter no parsnips, as they say. Rousing speeches from conference platforms are one thing. They can send everyone home with a warm glow. Getting a policy implemented in an increasingly hostile environment is quite another. Personally I think the plaudits should be handed out for successful implementation – once everyone has signed on the dotted line then open the bubbly. Or bang the Cabinet table, if you prefer. But plaudits shouldn’t be awarded merely for promising that something might be done, as long as the playground bully will allow us to do it.

But maybe that’s just me.

I’m not sure I’m cut out for this politics lark.