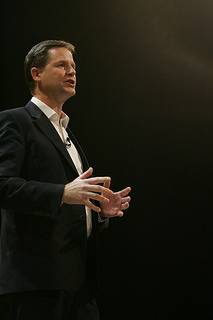 I don’t normally read the Times. But I bought it yesterday because it carried a half page opinion piece by Nick Clegg under the title Carping Labour must come clean about cuts.

We’ve been told that 2013 is going to herald a stronger message from the Liberal Democrats about the party’s distinctive position in the “centre ground”. The position is being defined as distinct from the other parties inasmuch as it is fairer than the Tories and more competent on the economy than Labour. I agree with the recent post at Liberal Democrat Voice in which George Potter argues that this isn’t an entirely convincing strategy, but that is a different issue.

I was interested to see how the strategy was working out in practice.

The main point of Clegg’s article is clear from the title. Clegg challenges Labour to get more specific. He is right that Labour have opposed cuts in general, but have declined to share with us which of those cuts they would reverse and how they would pay for the additional spending that is presumed to follow. Clegg’s piece is premised on the view that the total budget is, of necessity, fixed and hence a reversal of one cut will require a cut somewhere else. That premise is eminently contestable, although in the current economic climate it may in practice be broadly right in relation to revenue spending.

I’m not persuaded that there is much point to Clegg posing this question to Labour at this stage in the electoral cycle. Surely he knows as well as everyone else that Labour would be foolish to be specific when they are not obliged to be. But I guess it is a differentiation of sorts.

A huge amount could change between now and the next election. It might well make political debate more interesting if Labour were more specific about their priorities. But in the context of our political culture – in which having a rethink or revising your plans in the light of new evidence is portrayed as either incompetence, mendacity or moral defect – it is likely that they are only going to go public with their commitments at the very last minute.

In fact, the attack on Labour occupies only the last third of Clegg’s article. The first two thirds of the text are largely devoted to a recap of the Coalition’s economic performance. And this is crushingly disappointing.

It is disappointing because the account could have been – and no doubt probably was – drafted by one of Osbo’s Treasury minions. Clegg lashes himself to the Coalition’s economic record with no sign of critical reflection or critical distance. There is no acknowledgement that the country’s economic troubles may have been in part policy-induced. They are entirely the product of a deteriorating external environment, a posiiton that the Coalition have rounded criticised Labour for adopting.

It is disappointing because it includes basic errors that hardly instil confidence in economic competence:

We can reduce a deficit. We can pay off the national debt. Although, in practice, we aren’t at the moment. But we can’t pay off a deficit. School boy error.

It is disappointing because it contains the sort of equivocations and elisions that are the politician’s stock-in-trade:

Sound public finances are a crucial means to the end that we all seek: a rebalanced, prosperous economy.

The equivocation here is on the word: “rebalanced”. For the Tories it means little more than reducing the size of the public sector and passing more activities over to the market. For many Liberal Democrats it means trying to redress the dominance of the financial sector in the economy because it acts as a drag on productive activity and an unhealthy sectional influence upon the democratic process. But dealing with the latter has little to do with sound public finances. And it is not something Clegg mentions explicitly in the text.

This is true. And it sounds like a good thing. It is certainly better than inactivity. But, on the other hand, the Government has only gone down this route because it refuses to incur the costs directly by taking advantage of historically low interest rates and spending the money itself. The public expenditure consequences of the guarantees approach are less severe in the short term. But the Government has less direct control over whether anything happens in the short term. It relies upon other parties to pick up the ball and run with it. The Government is just standing on the sideline cheering, and holding the stretcher in case the player goes down injured.

It is disappointing because it contains the sort of statistical chicanery that we expect from the Tories:

Last year we saw half a million more people in work.

Presumably Clegg knows that the numbers the Treasury are wont to bandy around here include people on workfare, including those who are obliged to work for nothing in order to stop their social security benefits being stopped? So it is debatable whether it is right to count this as a good indicator of “new jobs being created”, in the way that the Chancellor would like it to be understood. Or maybe Clegg doesn’t know that.

And it is disappointing because it contains some monstrous non sequiturs:

… because some of the Government’s most important interventions, such as boosting housebuilding take time to come into effect, we’re compensating for the lag by giving families more immediate support. From April more than 20 million basic-rate taxpayers will have had up to £600 off their income tax bills. The fifteen hours of free childcare we give three and four-year-olds will be extended to two-year-olds in around 150,000 homes.

We can leave aside the highly questionable premise that the Government’s interventions on housebuilding are going to make a substantial difference when they arrive. The more challenging task is to forge the logical link that takes us from lags in housing starts to extending free childcare to two-year-olds via increasing income tax thresholds. All those policies individually are welcome. But the first reaction on reading this passage is most likely: Eh?

So, overall, I came away less than enthused by Clegg’s piece. Of course, when approaching it we have to bear in mind that it is written for the Times’ readership, so differentiating the Liberal Democrats may not be top of the list of priorities. And Clegg is signed off as the Deputy Prime Minister rather than the Leader of the Liberal Democrats.

But all of that just strengthens the case for those who argue that Clegg, through no fault of his own, has placed himself in a position where he is obliged to defend the Coalition record in a way that means he can never credibly lead the Liberal Democrats to a more differentiated independent position.

Image: by Liberal Democrats via flickr under Creative Commons