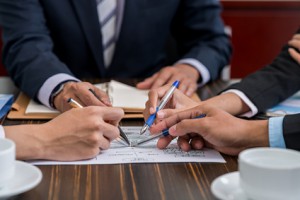 … and I’m not sure the messaging quite hits the spot.

Today’s Telegraph contains a piece entitled Vote Libdem for another Coalition, Nick Clegg says. On closer inspection it turns out that the article is based on the advanced briefing. But, nonetheless, the statements attributed to Clegg in the article seem to be framed rather unwisely.

It is surely true that a coalition government is one of the likely outcomes of the General Election. It is also the case that a coalition in which Liberal Democrats are involved, alongside either Labour or the Conservatives, is likely to have a more desirable policy platform than either party governing alone, for the sorts of reasons Clegg alludes to.

But the idea of voting Liberal Democrat if you want a coalition doesn’t make much sense. Whether this is precisely what the briefings, or Clegg, actually said or meant is no doubt open to debate. But, whatever was said, it opened up sufficient space to be construed in this way.

Whether a stable coalition is an outcome of the election, of course, depends fundamentally on how the electoral arithmetic turns out.

More importantly, it is not something that is in the gift of the Liberal Democrats. If there is a coalition government then it need not necessarily involve the Liberal Democrats. Even if the comments from the Clegg corner are based on hope rather than expectation, it comes across as rather presumptuous to assume otherwise.

It is fairly evident that neither Labour nor Conservatives look on the prospect of coalition with the Liberal Democrats with any great enthusiasm. Indeed, it seems there are powerful factions within the Conservatives who are going to play very hardball indeed as the price for coalition. If they are willing to tolerate it at all. One can only imagine the same applies within Labour.

So Clegg’s position has been represented as holding out a prospect – that may or may not appear tantalising to voters – which he has very limited influence over delivering. That’s the sort of thing that has the habit of returning to bite you on the bum at a later date.

Clearly there is a degree of co-ordination to the messaging because also today Simon Hughes pops up to talk future coalition. The key message here is rather different. The BBC reports his comments under the headline Lib Dems could form coalition with ‘any party’, Simon Hughes says. Which seems a little unfortunate.

What it appears Hughes was saying was that the Liberal Democrats are open-minded about who they might negotiate with. However, the point rather lends itself to being constructed as saying that the party will do anything to stay in government and therefore will strike a deal with anyone. If he’d said “either main party” rather than “any party” it would have limited the apparent promiscuity, even if when it comes to it there is going to be an attempt to assemble some form of even more unholy alliance – ahem, grand coalition.

If you had to hazard a guess as to what Hughes was also attempting to do, it was to seek to counteract the view that a shady deal has already been done. The perception is already out there that Nick Clegg and his acolytes have made up their minds that they want another coalition with the Conservatives. They are, after all, well-established in the minds of large swathes of the electorate as yellow Tories.

If votes and seats line up tidily then there is no real space for debate. But it is quite possible that the largest party in Parliament is Labour, while the party with the most votes is the Tories. Then what? We’ve heard those in the Clegg corner make reference to negotiating with the party with the most votes. That offers a possible means of keeping the current coalition functioning, even if it were then permanently dogged by questions about its democratic legitimacy.

It is quite possible that Hughes’ intervention is an attempt to shut that option down. That it is a public skirmish that forms part of an ongoing private battle.

Questions about future governing arrangements are inevitable over the coming weeks. Messaging is clearly difficult. But I’m not sure it’s got off to a great start. The voters can’t vote for coalition, even if they wanted to. And a party that is perceived as lacking principles or red lines in terms of coalition partners is unattractively mercenary. The Liberal Democrats would be better off striking a positive but slightly more circumspect tone. Maybe this:

The party is confident in itself. Voters should support it for what it stands for. If the electoral cards fall such that a coalition is a feasible outcome then it stands ready, as it did in 2010, to work in the national interest to bring the country stable government that delivers on Liberal Democrat values. If coalition negotiations, with whichever party, do not look like they will result in an agenda that would sufficiently further those values then our participation in such a coalition might not be possible. The party is not interested in being in government at any price.

Such a position assumes that the party is confident in itself and has a clear idea what its values are, but we’ll maybe leave that to one side for the moment.

For all I know this might be the message that’s being attempted. But I don’t think it’s coming across loud and clear just yet.