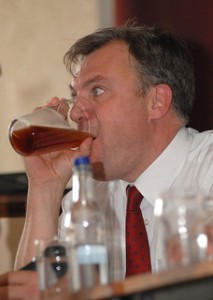 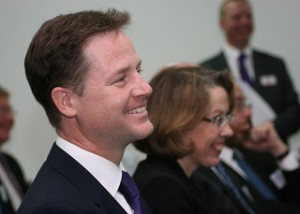 Today, as might have been anticipated, Andrew Rawnsley took as his subject the apparent thawing of relations between Labour and the Lib Dems. The opinion polls suggest that an outright Labour majority in 2015 is by no means assured. So it makes sense for them to leave the option of plan B open this time around. The major news this week was Ed Balls’ concession that it would be possible to work with Nick Clegg, rather than demand his head on a plate as the price of coalition. Others in the Labour party – notably Tom Watson in the New Statesman yesterday – are, however, holding firm to the Clegg’s-head-on-a-plate option.

My initial reaction to Nick Clegg’s “Ed Balls” tweet earlier this week was that it was quite a cute move. But the overall process is rather nauseating. If the two sides had not spent so much time unnecessarily calling each other names in the first place then they wouldn’t now have to make such a performance of kissing and making up.

Liberal Democrats will no doubt latch on to some of Rawnsley’s comments about the broad areas of agreement that now exist between Labour and the Liberal Democrats. That’s the passage Stephen drew our attention to. Rawnsley summarises the problem this policy alignment raises:

There is so much convergence, in fact, that the Lib Dems’ problem with going into government with Labour might be not be the number of disagreements, but the absence of them.

This presents risks for the Liberal Democrats:

Maintaining a distinctive personality for the Lib Dems could actually be harder in coalition with Labour because they agree on too much.

Sandwiched between these two points Rawnsley observes that:

There is now something close to a consensus view among leading Lib Dems that they should have done more to differentiate themselves from the Conservatives in the early phase of the coalition’s life. They believe lack of differentiation cost them their identity and with it many supporters. Hence the strategy they are pursuing now of being increasingly aggressive about asserting their divisions with the Tories.

I found the first part of this passage rather extraordinary. Over the last three and half year, and particularly over the first couple of years following the 2010 general election, many commentators internal to the Liberal Democrat party pointed out that the approach the leadership were taking was likely to backfire. More than once it was argued that to offer enthusiastic public support for a range of illiberal or punitive policies but at the same time maintain that we’re still liberal at the core looks incoherent or disingenuous. Or both. It would have been better to be clear when Tory policies were being supported under sufferance in an attempt to make Coalition work, rather than giving the appearance of “going native”. At least then when “differentiation” was attempted in “stage two” of the Coalition it wouldn’t simply reinforce the apparent hypocrisy of “stage one”.

In an era where many voters work on no more than a very impressionistic view of what the parties stand for, largely framed by the media, and where the appearance of sincerity seemingly goes further than the actuality, the risks of the hold-close-then-differentiate strategy were obvious. And that isn’t the twenty-twenty vision offered by hindsight. There was plenty of puzzlement expressed in 2010 and 2011 about the strategy being deployed. I may well have expressed some of that puzzlement myself.

I guess we can be grateful that “leading Lib Dems” have now worked it out. It has only cost hundreds of councillors their seats in the process. And we should no doubt expect carnage in the rapidly approaching European elections. But hey ho.

The future challenge that the Rawnsley identifies is a real one. The challenge for the Lib Dems is greater than it perhaps first appears. The problem is that Labour have largely moved on to the Liberal Democrats territory, rather than vice versa. The policy commonalities that Rawnsley identifies – for example, the Mansion Tax – are a case of Labour adopting longstanding Liberal Democrat policies. The one area of clear area of divergence is the economy, and even there it depends on who you speak to.

It is a long time since Labour were a genuinely socialist party. You might argue that they are primarily a social democratic party. It is therefore inevitable that their policy platform will overlap strongly with that of the Lib Dems, given the roots of the Lib Dems lie in both liberalism and social democracy.

But if Labour are moving on to your territory what do you do? Stay anchored to policies rooted in your beliefs and welcome those who have finally seen the light? Or reposition in order to differentiate?

Rawnsley reiterates Nick Clegg’s own understanding of what he is trying to do:

But again I think this is a strategy fraught with risks. Equidistance implies that it is possible to calibrate the positions of the parties on a single axis. And it implies that the Liberal Democrats don’t offer anything very distinctive, just a watered down version of Labour’s concern for social justice combined with a diluted version of the Conservatives’ crony capitalism. To me that doesn’t feel enough to galvanise support.

But what do I know? Perhaps that encapsulates precisely what voters occupying the mythical centre ground are looking for.