[This post is the original version of a text that first appeared in issue 370 of Liberator magazine (February 2015), under the title “Sustained by useful idiots”] 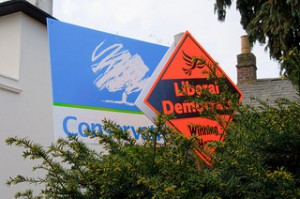 As we approach the last few weeks of this Parliament it is almost inevitable that our thoughts turn to evaluating the Coalition Government as a whole, the role of the Liberal Democrats within it, and the implications for the party of participating in a Westminster government for the first time in many decades. But this is by no means a trivial task. Not least because the answers depend on the angle from which the issue is viewed.

If we focus on the politics of the Coalition then one common criticism has undoubtedly been put to bed – coalition governments are not by definition weak because at their heart sits horse-trading and compromise. This government has pursued a radical agenda renegotiating the role of the state. It has set in train structural changes in a whole range of policy areas that have yet to fully work themselves through the system. This was possible in large part because for much of the Parliament the Liberal Democrats were willing to put aside dissent, in public at least, and support a wide range of Conservative projects. Only in the last year of the Parliament has the party made any real effort to differentiate from the Conservatives.

This two stage strategy of hugging the Conservatives close then differentiating was, we must presume, designed to demonstrate the broad principle that coalition can deliver stable government with a clear agenda. I have never been persuaded that it is a wise strategy in the longer term. It carries obvious risks. Supporting policies you clearly don’t like comes with coalition territory. Explaining that you are doing so under sufferance would at least make it clear what was happening. But supporting policies you may disagree with in private while showing a unified front with the Conservatives and doing so with seeming enthusiasm has caused serious damage to the party. We live in a country, and face a media, that seemingly struggles with the concept of coalition: collective responsibility was construed as collaboration or, worse, ideological alignment – the party were “yellow Tories” all along.

And once the party moved to differentiate it opened itself up to accusations of hypocrisy: it suddenly starts disagreeing with policies that it only a few weeks previously it had enthusiastically voted in to law. Sceptical voters might reasonably ask: does that mean you weren’t telling us the truth back then?

If you wanted to create the lingering impression that you’re a bunch of untrustworthy chancers that’s probably quite a good way of going about it.

If we think about the processes of Coalition government one of the things the Liberal Democrats got right, given the objective was stable government, was convening a special conference to make sure that there was broad backing for going in to coalition. It has made party management easier for the Liberal Democrats than the Conservatives. And it appears the other parties are quite keen on trying to adopt some sort of similar approach, if there is another coalition after May, even if they don’t have such obvious constitutional mechanisms available.

On the other hand, I have long been puzzled by the Liberal Democrats’ early approach to coalition. For a party that has long appreciated coalition and whose only real chance of participating in government in Westminster was in coalition there seemed to have been limited thought about how the party could work at the pace of government. Policy making through biannual Federal Conferences was obviously not going to be sufficiently nimble. And it was inevitable that the party was going to have to respond in government to emerging issues about which it had no settled policy. But it seemingly took a while to work this out and to put in place more responsive mechanisms that meant Liberal Democrat input into coalition policy did not simply rely on whatever views Nick Clegg and Danny Alexander happen to contribute to the Quad or whatever Minsters and their Spads cooked up on the move.

I think there are still unresolved issues about how party policy relates to coalition policy. Greater thought needs to be given to how the party at large can be helped to understand what is going on when the Parliamentary party not only doesn’t follow party policy but actively votes against it. That has happened several during this Parliament, including on matters outside the coalition agreement and hence for which there was no obvious obligation to vote with the Conservatives. There may well be reasons. It may well be tied up with strategy and the long game; with tactics and the realpolitik of coalition. But there needs to be a better way of communicating this. Otherwise, Federal Conference becomes something of a charade. Indeed, you already pick up that feeling from some conference reps. Yes, we’re the only party where policy is developed and voted on by the members. But when push comes to shove that policy will be set aside by the Leadership if it suits the purpose – even if that purpose is rather mysterious.

Finally we can think about the programmes pursued by the Coalition government. Clearly the whole of the Government’s agenda has been framed in relation to the deficit and austerity policy. We could debate at length whether austerity policy was the right economic response in 2010. My sense is that among economists the balance of opinion lies against the government, and even some of those who supported austerity in 2010 have tempered their enthusiasm subsequently. In one sense this is a bit of a moot point because the Government largely abandoned its plan A after a couple of years, then rather implausibly arguing it has been steadfast in its approach. In practice it has delivered a level of deficit reduction pretty close to that which Labour were proposing back in 2010. Of course, in 2010 the Coalition argued that Labour’s deficit reduction plans would have led to the sky falling in. Strangely enough the sky hasn’t fallen in. But then the Chancellor’s argument in 2010 was characteristically nonsensical.

Coalition politicians have spent five years telling us about the “difficult decisions” they have had to make in trying to cut the deficit. If we rewind to 2010 we should recall the claim that “fairness is at the heart of those decisions” and “those most in need are most protected”.

It depends on who one thinks are those most in need, but across a broad range of policy areas the cuts have hit those on the lowest incomes hardest. As recent reports published by the London School of Economics make clear, while there are some bright spots, many of the social policy changes implemented by the coalition have been regressive or affected the most vulnerable most directly. Britain’s already meagre welfare safety net has been eroded further. For example, we spend a lot of money on social security not because our benefit system is particularly generous to the individual but because a lot of people are poor. Coalition policies such as restricting levels of benefit uprating mean that levels of absolute poverty worsen.

As more evidence is gathered it becomes clearer that criticisms of policies such as welfare reform are well-founded. The argument that fairness is at the heart of policy becomes harder to sustain, if not entirely implausible. The policy changes don’t save anywhere near as much money as claimed; indeed they may save no money overall. But they have made the lives of many vulnerable people immeasurably worse in the process.

I think of those inspiring words in the preamble “We champion the freedom, dignity and well-being of individuals” and I think of changes to disability benefits, work capability assessments or the draconian sanctioning regime that the Coalition has overseen and I know – I just know – that had the Liberal Democrats been in opposition they would have, rightly, condemned those policies in the strongest possible terms. If we’re serious about the statement “No one shall be enslaved by poverty” we should have some harsh things to say about the direction of current welfare policy. The same would apply to the Coalition’s reforms to legal aid or judicial review, which save little money but undermine key liberal principles relating to access to justice and the rule of law. I am genuinely bemused by the Party’s support for them.

Liberal Democrats are inclined to claim some key policy victories such as the rise in the personal tax allowance and the triple lock on pensions. I find it difficult to get quite so enthusiastic about them, if I’m honest. Not that they are bad policies in themselves, but when we talk of policy success they tend to be viewed rather partially. Pensioner poverty was undoubtedly a problem that needed addressing. But the triple lock in the context of a relatively fixed, or declining, overall envelope on spending means a larger and larger proportion of resources going to the retired while those of working age see their incomes fall further behind. At some point it would be wise to say that pensioners are doing ok, relatively speaking, they aren’t the ones most in need of a further increase in their income.

The Liberal Democrats can rightly identify a range of Coalition policies – such as the establishment of the Green Investment Bank – that have the Liberal Democrat stamp all over them. Indeed, it is possible to produce a long list of government actions that chime with Liberal Democrat priorities and policies. But most headline policies upon which the government will be judged – on the economy, NHS reorganisation, welfare reform, immigration, security – carry the Conservative hallmark. That is perhaps inevitable. But in many cases those policies not only grate on liberal sensibilities but are badly thought through and/or poorly implemented. The challenge is how to tell the story of coalition in ways that get beyond the accusation that the Liberal Democrats have been useful idiots propping up a radically illiberal Conservative government and highlight its positive, liberal achievements. In the public mind these are never going to outweigh the broader thrust of policy originating with the dominant partner. But that takes us back to the point that we need to be better at communicating the nature and limitations of coalition.

In the absence of that understanding of the dynamics of coalition politics being firmly embedded among the electorate it is hard to see beyond the party getting further punished at the ballot box in May. But if the next Parliament also produces a coalition government, of whatever flavour, then at least the novelty of the arrangement will wear off. Given that it appears the era of two party politics is well behind us, we might expect to see a growing appreciation of coalition politics emerge. Whether, and how, the Liberal Democrats might benefit from that process of enlightenment remains to be seen.