On agreeing with George Osborne 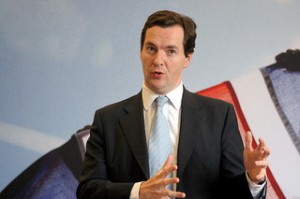 I have to admit I found the whole situation rather discomfiting. Yesterday I found myself agreeing with George Osborne.

Of course, as David Gillon (@WTBDavidG) pointed out on Twitter, we can all join George Osborne in agreeing that Iain Duncan-Smith is not perhaps the sharpest knife in the drawer. But, beyond that, most right-thinking people tend to find themselves parting company from the biggest cheese on Horse Guards Road.

So when I read reports of Osborne’s comments on raising the minimum wage I was rather surprised that my initial response was to agree with him. Especially as he seemed to be setting out a position in opposition to that adopted by St Vince of Cable, who, as we know, is generally right about such things.

It seems that IDS, Matthew Hancock, Oliver Letwin, Sajid Javid, and several other high profile Tories including think tankers such as Ryan Shorthouse are arguing for an above-inflation rise in the minimum wage. This in itself is rather remarkable, given the Tories’ traditional hostility to the whole concept.

A few months ago Vince urged the Low Pay Commission to restore real-terms rises in the minimum wage – given that its value has been significantly eroded over the last few years. That is, of course, not quite the same argument.

George Osborne, on the other hand, appears to support a rise in the minimum wage but is cautious about any rise that is so substantial as to cost jobs.

The Guardian reports his comments as follows:

Osborne appeared to play down the idea of a rise on Thursday, saying it should not be allowed to jeopardise the economic recovery.

“But it has to be done in a way that doesn’t cost people their jobs because that would be self-defeating. We have the Low Pay Commission as a body that exists to make exactly that judgment and what we’ve got to do as a country is get that balance right between supporting business, growing our economy and making sure it’s a recovery for all and that is what our long-term plan is all about delivering.”

I absolutely agree with Osborne that it is the Low Pay Commission’s role to identify an appropriate level for the minimum wage. It is not a process that should be directed or disrupted by politicians. We have a situation here not unlike that over MPs’ pay. Politicians set up an independent body to try to take the politics out of the process, but then seemingly can’t leave it alone.

In this respect, it is clear that Osborne and Cable are on the same page.  Cable was urging the LPC to consider something, rather than suggesting that the LPC’s proposals should, if necessary, be overridden.

But it is also worth remembering that the LPC’s brief in assessing the appropriate level for the minimum wage includes precisely the obligation to consider its effects on employment. That is arguably a key reason why its real value has been eroding during the current period of economic weakness. Indeed the available evidence suggests that so far the UK national minimum wage has not had a substantial negative impact on employment. Its low level – a long way below that required to remove reliance on in-work benefits – means that is hardly surprising.

So, in some senses, if the Government is committed to respecting the LPC’s judgement then Osborne’s comments have little practical purpose. They no doubt, of course, serve all sorts of political purposes. Resolve has been stiffened somewhere. Someone’s negotiating position has been strengthened.

This whole discussion, though, raises some interesting questions. There is the question of how you might reconcile the advocacy of substantial minimum wage increases with Conservative philosophy. There is the question as to the nature of the evidence base upon which the minimum wage deliberations are conducted. There is the more fundamental question of the model of the low paid labour market that is being used. That then relates to all sorts of questions about how employers react to changing relative costs of factor inputs: What impact will it have on innovation or factor substitution? How fast, if at all, do wage increases feed through into increased demand? Will firms absorb the cost increase in reduced margins or try to pass it on in increased prices? How do increased wages affect the government’s fiscal position through reductions in in-work tax credits and hence potentially moderate levels of corporate taxation?

Employers are inclined to argue ex ante that increasing minimum wages will have a negative impact on employment. It undoubtedly serves their purposes to do so.

But that doesn’t mean the effect will be as forecast or forewarned.

It must be the case, of course, that the minimum wage could be raised to such a level as to make production uneconomic, and that would have a serious detrimental effect on the economy and households’ welfare. I’m not sure anyone disagrees with that. The question is what that level is. There are expert labour market commentators who take the view that there is scope for a robust increase in the minimum wage without it having a significant adverse employment effect. So the different sides in this debate may not be as far apart as it first appears.

You could therefore argue that the key question is the economic model the LPC is working with.  It could take a robust approach, in which case it could propose an increase that satisfies both the ‘significant rise in the minimum wage’ brigade and the ‘cautious not to increase unemployment’ brigade.

And that would mean that while I found myself agreeing with Osborne it was entirely coincidental. Either he was trying to draw a distinction without a difference. Or he was misguided in his understanding of the situation.

Order would thus be restored to the universe.

You could, however, argue that the last thing that is likely to happen is for the LPC to take a robust approach. But that feels to me to be a rather different – and more profound – issue regarding the appropriateness of the current policy architecture. And it would mean that anyone with aspirations to improve the position of low paid workers who finds themselves in alignment with Osborne finds themselves in an awkward spot.