Travels through Coalitionland: Notes of disquiet and dissent 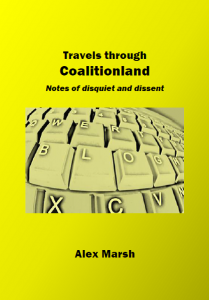 The formation of a coalition between the Conservatives and the Liberal Democrats was probably the only viable outcome of the General Election in May 2010. A coalition between two unnatural bedfellows in the public interest looked like the only plausible way forward.

Coalition was always going to be a journey that carried risks. It is rarely kind to the junior partner. The history of Tory-Liberal coalitions in Westminster is not an entirely happy one, especially for the Liberals.

The nature of the Coalition’s political agenda became apparent fairly soon after it was formed. Criticism and protest swiftly developed in response. My response was to engage with the agenda online. I have been blogging about political developments under the Coalition since 2010.

This book contains a selection of the essays that I have blogged over the last two and a half years. The essays focus on coalition politics, the role of the Liberal Democrats within the coalition, and the way in which Liberal Democrat policy and practice appears to be evolving. Many of the original posts were triggered by specific political events, but they tend to be framed in terms of broader issues, values and principles. Many of the essays are critical of contemporary political developments. The essays are arranged chronologically. They therefore offer a guide, albeit a very loose and imperfect guide, to aspects of the coalition’s evolution.

Travels through Coalitionland is available free to download in pdf format. Or you can access it via Scribd.com.