The miraculous power of welfare reform 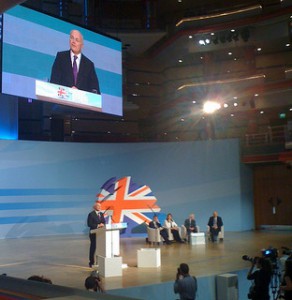 The international news is pretty grim at the moment. This doesn’t really fit well with the traditional idea that we’re in silly season, when Prime Ministers travel to holiday destinations to point at fish.

Yet something that fits entirely comfortably with silly season is another self-justificatory speech by Iain Duncan-Smith. And today we were treated to a corker. It would be silly, if it weren’t so alarming.

I blogged about IDS’s last big speech back in January. Then I noted:

We have a fine smattering of slogans and soundbites.

There are some extraordinarily sweeping claims about the attitudes, lifestyles and behaviours of those who receive assistance from the state.

If you are looking for simplistic binary understandings of the world – those who work hard and those who are “trapped” in a lifetime on benefit – and implausible generalisations about the moral laxity or weakness of will of those who require state support then you’ve come to the right place.

We have an interpretation of the impacts of welfare reform that can only be sustained as long as we make little or no effort to understand what is actually happening on the ground. There’s a little statistical chicanery of the type that will be familiar to seasoned IDS watchers.

But then no one would mistake IDS for a member of the reality-based community.

Yet, mostly we have a great confused jumble of incoherent fragments of thought and inconsistent lines of argument.

Many of the same ingredients were very much in evidence today. But they were given some new twists and combined with some new ingredients.

We had some added arguments about the role of immigration. Apparently the problem is not that immigrant workers are willing to work for poverty wages, the problem is that the unjustified generosity of our welfare system means that British workers are unwilling to take on the roles that are on offer. This gives IDS the lead in he needs in order to expound his view of the welfare system, which is disturbingly resonant of the less eligibility thinking of the poor law. If you make the welfare system stingy enough, increase levels of conditionality and compulsion far enough, and wave a big enough stick at potential transgressors then people will, strangely enough, rediscover the nobility of paid employment, however poorly it might be paid.

Today’s speech was very much about the dignity of work. It was very much less about work as a way out of poverty. Indeed, it had very little to say about addressing income poverty at all. And, while claiming that the welfare reform agenda has moved people off out-of-work benefits and in to work, IDS was notably silent about the corresponding increase in in-work benefit claims, particularly for housing benefit.

That the current toxic policy cocktail also gives employers an open invitation to reduce pay and conditions, because they know workers have no choice but to accept jobs or face starvation, is the sort of detail that really needn’t detain us. We might wonder whether IDS is familiar with the characteristics of under-employed, low pay Britain, and the increasing proportion of workers being paid below a living wage.

Perhaps the most striking element of today’s speech is IDS’s willingness to claim positive impacts for his welfare reform agenda. It would seem that it has played a major, yet so far largely unheralded, role in driving Britain’s economic recovery. IDS would appear to see all the elements of the programme – the Work Programme, WCA, the benefit cap, the bedroom tax – as successfully encouraged people back to work, and to be doing so in ways that compare favourably with the performance of earlier policies. These are all highly contentious claims. He has been heavily criticised in the past for suggesting that there is a causal relationship between his welfare reform policies and increased labour market participation. And he is being criticised again now.

A reduction in the number of people on out-of-work benefits can occur through a number of different mechanisms, only some of which are about increasing labour market participation. There are respectable arguments that the reductions we have witnessed have very little to do with welfare reform per se. There is little, if any, evidence that welfare reform is the key factor.

The aspirations underpinning IDS’s agenda are, in many ways, noble. Everyone should be able to achieve as much independence has they are able, to feel included and that they are contributing. But, as just about everyone recognizes, it is an agenda being pursued with an evangelist’s zeal and little subtlety. Even if the aspirations are noble, the problem diagnosis and policy prescription are flawed. The reading of what is happening on the ground is so extraordinarily idiosyncratic. The arguments are seemingly given momentum by the power of belief alone. It is an agenda that is impervious to logic or evidence.

But it is an agenda that appears unstoppable. So we will no doubt hear the same arguments again many times over.

But, as Franklin D Roosevelt famously observed, “repetition does not transform a lie into truth”.