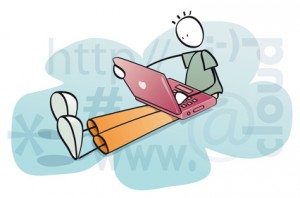 One of the most intriguing characteristics of blogging is its flexibility. You can find plenty of people willing to offer their views on how you should go about blogging if you want to maximize your audience and the like. But, while some of these hints and tips may well be of value, I’m not sure there is a formula for success.

While the received wisdom might be that posts of around 500-600 words will hit the spot most effectively, there are hugely effective bloggers who have mastered the art of the meaningful single paragraph or, indeed, single sentence post. Or bloggers who intersperse textual posts with images or videos that are left to speak for themselves.

Then again there are windbags like me who can barely say anything sensible in less than a thousand words. Occasionally – and more commonly when I started out – I have published posts of 2,500 to 3,000 words. These days I’m more likely to bung something of that length on to Scribd and use a blogpost to signpost to it.

Another distinctive blogging format is the thematic series. I don’t suppose there is any technical reason why series of thematic posts could not feature more regularly in the mainstream media. But I guess they are perceived to require a degree of commitment from the publisher, the author, and the audience. That is probably sufficient to discourage some publishers. When you’re pushing the publish button yourself it isn’t so much of an issue.

I’ve not self-consciously developed thematic series. Only once, several years ago, did I dabble with the form. And that was at the instigation of Mr Pack, who declared one of my posts far too long for LDV. So I ended up breaking it into four parts.

But it is a format that thrives in the Liberal Democrat blogosphere. Even here it takes different forms. There is the short sharp series, like Ben Colburn’s series of guest posts on Caron’s blog a couple of years ago (the first of which is here). Or there is the rather more leisurely series with occasional additions over an extended period of time, such as Alex Wilcock’s Liberal Mondays series (the most recent post is here). Alex has published a number of other series; the series that brought together responses from diverse Liberal Democrats to his 2013 ‘What do we stand for challenge’ gave plenty of food for thought.

Then there is the sustained series of focused posts. I’m not sure this format could exist outside the blogosphere. Here I am thinking of the series of posts that Nick Barlow has just finished – blogging his summary of, and response to, the key dimensions of Conrad Russell’s thoughts on liberalism as captured in An Intelligent Person’s Guide to Liberalism. If you have not read the series then I would encourage you to do so. It is well worth it. Nick has provided a handy index post for the series here.

It strikes me that most of the series in the Libdem blogosphere I can think of are giving some aspect or other of liberalism a bit of a workout, either at the level of principle or in seeking to work through how a liberal principle might translate into an applied context. That may be entirely coincidental. Or it may be a necessity. Blogging, when framed in terms of the single blogpost, isn’t a great format for sustained philosophical reflection. But the series starts to open up enough space to get to grips with more complex topics and to develop arguments of greater subtlety.

Of course, Libdem bloggers have no monopoly on serial bloggage. At the moment Unlearning Economics, for example, is part way through a series on macroeconomics after the Global Financial Crisis. That has an entirely different flavour. But it is also well worth a read. The most recent post – part 5 – can be found here.

Perhaps as some bloggers move towards a greater focus on the short sharp interventions of microblogging, there is scope for more to move in the opposite direction and go not just long form but multi-part. A rediscovery of the Victorian love of serialisation, and the delicious sense of anticipation it entails, but with a focus more directly upon ideas than fictional narrative.

And there are no doubt further, as yet undiscovered, ways bloggers will use the medium to communicate what they feel the world needs to hear. It’s this flexibility that may well be key to blogging’s resilience.