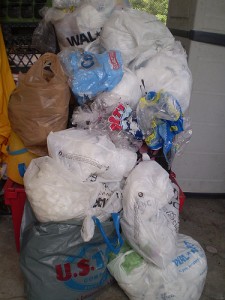 Calls for a plastic bag tax for England have reappeared in the news.

The latest statistics show a sharp increase in plastic bag usage over the last year in England, but a drop in usage in Wales where a tax was introduced in October last year. So calls for a tax in England have returned.

The Government’s rejection of a plastic bag tax in England was widely report back in June. There appears to have been a bid to get a tax included in the budget and then again in the Queen’s speech. But pressure from Caroline Spelman to move in this direction was rejected by George Osborne.

England appears to be swimming against the tide on this issue. Not only is tax is already in place in Wales but also in Northern Ireland. And one is being considered in Scotland.

Back in June Matt Chorley of the Independent reported on the Coalition’s decision:

it is understood the idea has been knocked back, in part because of fears the Government could be accused of adding to the cost of the weekly shop at a time when families are struggling financially.

Those close to the government negotiations said there has been a “firm push back” from the Treasury. “After granny taxes, pasties and fuel fiascos there doesn’t seem to be the stomach for any cost-of-living consequentials. It looks dead in the water from here,” said a source.

This looks like a bit of an odd argument from the Treasury.

The pasty tax and the granny tax may have been about harmonisation of tax treatment. And they may well have been about raising revenue. But they were not levied in an attempt to change behaviour. Indeed any change in behaviour that resulted may well be seen as an unfortunate and perverse side effect.

In contrast a plastic bag tax is simply an application of the “polluter pays” principle – internalising the externality.

The point is precisely to change behaviour.

And if it succeeds in doing so – as it has in Wales – then it won’t have “any cost-of-living consequentials”. People will use fewer bags so they won’t incur the additional cost. Surely it’s not a difficult argument to grasp?

And introducing this type of tax can result in rapid modifications in behaviour.

Although I’m based in Bristol, I spend quite a lot of time in Wales. And I seem to spend plenty of time shopping when I’m there. Within a month of the tax being introduced you got into the habit of leaving the house with a plastic bag. Or keeping one in your pocket most of the time. Or swapping plastic bags for something a bit longer lasting. Or all of the above.

And it carries over. Now I usually take plastic bags when I go to the supermarket in Bristol as well. A number of times I’ve caught myself, on the way to the shops, thinking that I didn’t “need” to bring a bag because you can still pick them up for free in England.

Plastic bags are hugely problematic, environmentally. And having access to free bags is hardly a God-given right that needs to be protected come what may. The benefits of a tax are demonstrable.

This whole issue just seems to me to be a complete failure of political nerve. It may simply be that the Government feels it was powerless to prevent damaging media reporting of the change as a further cost of living hike. That would suggest the Government is in a real predicament.