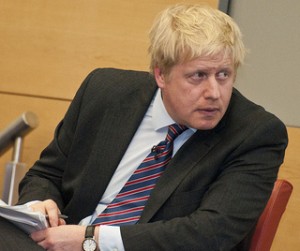 Over the last few days we’ve been presented with rather different perspectives on future directions for financial regulation and the City of London. The forces of conservatism are seeking to reassert themselves, arguing for a limited regulatory response to the manifest and manifold problems already exposed.

In Two cheers for Barclays? I recently argued that the new round of banking scandals – now with fresh outrages perpetrated by HSBC in the mix as well – has reopened the window of opportunity for significant policy change. Some senior political figures appear determined to slam it shut again.

Boris Johnson turned up on the Andrew Marr Show on Sunday. His main aim was to talk up the Olympics even further, including, perhaps less edifyingly, referring to it as a “schmoozathon”. But Marr took the opportunity to raise the issue of standards of conduct in the City and the need for reform. He framed the question in terms of concerns being expressed in the other financial centres of the world about the probity of the City. The suggestion is that the succession of scandals the City has faced over the last few months mean people are reluctant to do business there and are looking elsewhere. The implication was that the City needs to be sorted out for its reputation to be rehabilitated, or its long term future as the world’s pre-eminent financial centre may be in doubt.

We all know Boris is one of the most loyal servants of the City. He proceeded with one of the most egregious attempts to throw up a smokescreen. He pretty much ignored the direct question. He diverted the interview from pressing questions about honesty and competence in parts of the banking industry with, among other things, arguments about how important financial services is as an employer. He suggested there was no need for more stringent regulation because that would only threaten the viability of the financial services industry to no good purpose.

Boris was joined on Tuesday by that other loyal servant of the financial services industry, Tony Blair, who made a nuisance of himself in the Telegraph arguing that the solution to woes of the City is not to hang a few bankers from lampposts. It isn’t to turn our backs on the progressive revolution initiated by Thatcherism and to retreat to draconian state regulation. Blair acknowledges that a culture change is needed in financial services, but he isn’t overly clear how that is to be brought about. We have to be aware that his comments are filtered through the Telegraph’s own particular perspective, but this was an extraordinary position for an erstwhile leader of the Labour party to adopt.

Boris’s whole performance was either prodigiously wrong-headed or intentionally misleading. It suggests at least one section of the Tory party doesn’t get it. And if he was channeling the views of the City, which seems quite likely, then it suggests a degree of complacency from that quarter that, while no doubt entirely characteristic, is completely inappropriate. Blair’s apparently simplistic binary perspective on the issue – freebooting Thatcherism or some form of oppressive state socialism – was barely worth taking seriously. Given the scandal-ridden reputation of key sections of the British financial industry the idea that anyone might think preserving the status quo is the best way forward seems utterly extraordinary.

The banking industry always holds the threat of mass migration over the head of any government that has the temerity to suggest greater regulation or increase taxation. Such arguments lack a strong evidence base, but let’s take them at face value. At the moment I would have thought any bank with a reputation not already tainted directly or indirectly by association with activities in the City is probably considering moving its business elsewhere – before it gets sullied by any unpleasant splatter from the “cesspit”. You’d have thought that the City would be taking firm action to try to salvage its own reputation and would welcome regulatory moves to allow it to demonstrate that everything is now above board: the system has been purged and probity has been restored. But apparently not.

No one really buys the arguments about problems being attributable to “a few bad apples” that are routinely wheeled out during such scandals. But perhaps problems are more engrained than typically recognized. I was particularly struck by the following passage towards the end of Ed Vuillemy’s feature in the Observer on Sunday about the links between the banks and drug cartels:

the former head of the UN Office on Drugs and Crime, Antonio Maria Costa, posited that four pillars of the international banking system are: drug-money laundering, sanctions busting, tax evasion and arms trafficking.

The response of politicians is to cower from any serious legal assault on this reality, for the simple reasons that the money is too big (plus consultancies to be had after leaving office). …

Herein … lies the problem. We don’t think of those banking barons as the financial services wing of the [cartels].

The stark truth is that the cartels’ best friends are those people in pin-stripes who, after a rap on the knuckles, return to their golf in Connecticut and drinks parties in Holland Park.

The notion of any dichotomy between the global criminal economy and the “legal” one is fantasy. Worse, it is a lie. They are seamless, mutually interdependent – one and the same.

Is this an overstatement of the problem? It’s hard to tell. But it would appear that evidence in its favour is accumulating.

This week we’ve also had some rather more measured and critical interventions from John Kay and Lord Turner.

John Kay’s review had included in its brief to address the problem of short-termism in the City by looking at remuneration packages. It has resulted in proposals that very much challenge the status quo. The final report appeared this week. It takes aim at some well-engrained City remuneration practices which are argued to create strong incentives that militate against focusing on long-term and genuinely productive capital allocation. The question now is whether the Kay Review will have any traction.

Lord Turner made an intriguing speech on Tuesday at Bloomberg. He, at least, was willing to start by acknowledging the City has a problem – encapsulated in the use of the term “banksters” by the Economist. Importantly for policy, he notes that the Vickers reforms are not sufficient to deal with the problems of the banking industry. Stronger regulation, including stronger enforcement action, is also required, as is a substantial shift in bank culture and values, and profound change in leadership and accountabilities at the top of major financial services organisations.

One corollary of a “safer” less risky banking and finance industry would be that it would probably be less profitable. It may well pay less and employ fewer people. It would most likely generate lower tax revenues. Politicians have made a lot of noise about the rebalancing of the economy away from over-reliance on the City. The action to back that up has been somewhat less concerted. It has been suggested that such a rebalancing will take a generation or more. Such statements are intended to give an indication of the scale of the challenge. But they can also reduce the sense of urgency of the task.

The problem is that unless strong action is taken to reform the City we may not have the luxury of a generation or more to develop alternative strands of economic activity to replace it. Multinational organisations may simply relocate sooner rather than later, and there is little that could be done about it.

I don’t think banker bashing alone is very helpful. Which isn’t to say that they don’t deserve bashing. But politicians need to reaffirm a commitment to firm reforming action. If the City is unable or unwilling to see that fundamental reform would contribute to its own preservation then politicians need to act.

Stephen Tall recently argued that Liberal Democrats could make reforming capitalism the theme of the second half of this Parliament. The Liberal Democrats is, after all, a party that sees itself as standing squarely against vested interests. Now is the time to put that into practice. They could find common cause with the more liberal branch of the Tory party and those in Ed Miliband’s Labour in search of a responsible capitalism. The banking industry is the obvious place to start. Pushing beyond the Vickers proposals to more wide-ranging reforms is the obvious route to go. More often than not I find myself disagreeing with Stephen – as seems almost inevitable within this most diverse of parties – but on this point I think he is exactly right. The renewal of British capitalism is much needed. It would be a fine aspiration for the next two and a half years.