The Tie That Binds 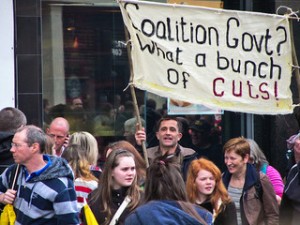 Last week’s reversal over Lords reform may turn out to be key moment in the life of the Coalition. In retrospect it may appear the point at which it all started to unravel. It was swiftly followed by another Cameron-Clegg relaunch, but that didn’t convince too many people that everything in the garden is rosy. Differences between the parties become ever clearer – witness George Osborne putting the kibosh on Ed Davey’s plans for renewable energy – even without the parties adopting a conscious strategy of differentiation.

But at least there’s the deficit reduction plan. In the national interest the Liberal Democrats put aside their own more cautious and contextually-sensitive plan for deficit reduction in order to form a coalition with the Conservatives. While everything else may seem to be rapidly fraying at the edges, the commitment to bringing down the deficit remains the tie that binds the parties together.

It is therefore rather unfortunate that the plan isn’t working terribly well.

The Government may seek to claim credit for reducing the deficit by a quarter. But it is worth recalling that thisrate of deficit reduction is much slower than originally planned. It is pretty much the situation forecast by the Office of Budget Responsibility for mid-2012 on the basis of the policies inherited from Labour. It therefore represents a rate of deficit reduction condemned by the Coalition, in its early months, as guaranteed to bring the country to its knees, at the mercy of the bond vigilantes of the global financial markets. That argument was always nonsensical, and so it has proved.

Clearly, the external economic environment over the last two years has been worse than most people would have anticipated in 2010. So factors outside of the Government’s control have driven tax revenues lower and benefit payments higher than expected. But the pressing question is how much of the current economic malaise is self-inflicted.

I suspect this week’s IMF staff report on the UK will not do the cause of Coalition unity much good.

In broad terms, the IMF argues that the Coalition’s approach to dealing with the deficit is not working because it is stifling growth. It argues that there is a case for slowing the rate at which fiscal consolidation is attempted because the current approach appears somewhat self-defeating. It suggests there is no reason to expect financial markets to respond adversely to this change in policy stance.

It is not simply the Labour party who are adopting this line. There are many in the economics community who have been making the same argument for some time. There is scant evidence that austerity policy of the type adopted by the Coalition has ever delivered the sort of recovery promised by Cameron, Clegg, Osborne and Alexander. It is more likely to permanently impair the productive capacity of the economy. That is the warning the IMF sounded this week.

And if austerity is pursued to its absurd limits then it can set off an economic death spiral. Hairshirt fiscal policies restrict economic growth, causing tax revenues to collapse and benefit payments to rocket. This in turn worsens the deficit and triggers another wave of fiscal retrenchment. The cycle then repeats. Arguably this is what is happening in parts of the European periphery.

Practical macroeconomics is more of an art than a science. How the economy behaves in response to policy changes is not at all as straightforward as it appears in the textbooks. So you could argue that the government has, in some respects, been unlucky. For example, if the monetary transmission mechanisms worked as the textbooks say they should then quantitative easing should have boosted growth. But the textbooks don’t really allow for the eventuality that the banks will just take the money, say thank you very much, and sit on it. The mechanism has broken down. The folly is not so much in experimenting with QE but inpersisting with it when it patently hasn’t worked as expected.

The Coalition now faces an existential challenge. The Quad is in a dwindling minority of people who think that the economic policy being pursued is the right one. Clearly recent policy has sought to move beyond undiluted austerity in order to championinvestment. But much of what is proposed is not about investing public money now. It is about (re)announcing investment occurring in later years. Or offering to use the government balance sheet to guarantee private investment. Or announcing that others are going to be allowed to invest and subsequently recoup the money from user charges. These are all ways of appearing to do things without actually spending much public money upfront. The underlying fiscal stance hasn’t altered very much, and the overall proportion of GDP being directed by Government at investment remains pitiful.

The core justification for the Coalition staying together is deficit reduction. If the current approach isn’t working then is the Government going to change course? Or is too much political capital invested in the current approach to make changing course a realistic political option? Given the number of U-turns that have already been made, I wouldn’t have thought that should be a meaningful concern. It is not a sign of weakness to rethink your approach, if it isn’t working very well. To persist with a failing policy is damagingly stubborn. Economic policy is not a test of virility.

This is not about whether the deficit is reduced over the medium term. No serious commentator would argue against doing so. The debate is about the best way to achieve that objective.

The response of the Liberal Democrats to the developing critique of austerity economics could be crucial. If the majority of informed opinion outside of the Coalition solidifies around the view that current policy approaches are not working then what do the Liberal Democrats do? Is there groupthink and a bunker mentality at the heart of Government? Are the protagonists willing to risk political immolation and economic implosion rather than depart from the agendato which they have so publicly committed themselves? Or do the Liberal Democrats push for a different approach to reducing the deficit, one based on slower fiscal consolidation and genuine public investment now not later? That would be where the inclinations of many in the party lie. It would be closer to where Liberal Democrat policy was positioned pre-May 2010.

If the Conservatives were not responsive to such arguments what happens then? Do the Liberal Democrat leadership grit their teeth and cleave to an austerity agenda even when other options have a better chance of delivering? At that point they may well come under pressure from influential sections of the Liberal Democrat membership to bail out.

On my own blog a few days ago I argued that the next CSR is the most likely crunch point for the Coalition. Differences over appropriate future directions for policy inevitably come into sharp focus when trying to establish spending levels and priorities. That was before the IMF report was published. I’m coming around to the idea that the crunch point may arrive sooner.