In the period since the 2007 Financial Crisis “economics” has played an increasingly high profile role in shaping policy. The austerity policies implemented in many western countries, with significant negative impacts upon citizens’ well-being and the social fabric, come with the endorsement of many economists as the correct medicine to deal with our economic maladies.

Yet, over the same period, the claims of the discipline of economics to any privileged insight into the workings of the economy and society have come under greater critical scrutiny than at any point over the last forty years. The sense of disillusionment with the value of mainstream economic approaches has undoubtedly grown. The empire may be crumbling. 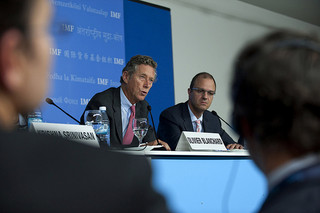 The latest instalment in this saga is the publication this week of an IMF working paper by Blanchard and Leigh in which they elaborate upon, and test the robustness of, a conclusion first reported briefly in the IMF’s World Economic Outlook back in October 2012. The conclusion is that the economists have got it wrong again. Specifically, forecasts of the impacts of rapid and aggressive austerity policies on economic growth were substantially understated. Austerity has had a much more negative effect upon countries’ economies than had been anticipated. This may not, perhaps, come as a huge shock to anyone else.

Blanchard and Leigh argue that the problem was that the fiscal multipliers used to make the forecasts were not the right ones. The multipliers had been estimated in “normal times” (their term). While they may have been perfectly serviceable when economies are operating normally, during a period of extraordinary economic turbulence like the one we are currently experiencing – in particular the effect of the zero lower bound on nominal interest rates – the effective multipliers are much larger. It would only be by going back to the 1930s and estimating fiscal multipliers for that period that you might be able to recover values that would be more applicable to current circumstances. This has recently been attempted. And, obviously, the run of data emerging for the post-2008 austerity period is lengthening all the time, which allows new estimates of the relevant parameters under current conditions.

Some commentators have used this paper as a basis for arguing that austerity policy has been a serious error and hugely damaging experiment, as its critics have maintained throughout. Alex Andreou at the New Statesman, for example, argues that George Osborne now finds himself as “an increasingly lonely poster boy for austerity”. While that is no doubt correct, Blanchard and Leigh do not conclude that their findings mean a rejection of austerity policy. They argue:

Finally, it is worth emphasizing that deciding on the appropriate stance of fiscal policy requires much more than an assessment regarding the size of short-term fiscal multipliers. Thus, our results should not be construed as arguing for any specific fiscal policy stance in any specific country. In particular, the results do not imply that fiscal consolidation is undesirable. Virtually all advanced economies face the challenge of fiscal adjustment in response to elevated government debt levels and future pressures on public finances from demographic change. The short-term effects of fiscal policy on economic activity are only one of the many factors that need to be considered in determining the appropriate pace of fiscal consolidation for any single country.

The debate over austerity in practice is vitally important. But the Blanchard and Leigh paper is epistemologically interesting as well. The argument is that many of the macroeconomic models used to forecast the impact of austerity are likely to have used the “wrong” fiscal multiplier. But it is hard to tell because in many of the models the fiscal multiplier is an unreported and unexamined parameter. In some cases Blanchard and Leigh have worked backwards from the forecasts with the aim of inferring what the multiplier must have been.

Their key argument is:

However, our results need to be interpreted with care. As suggested by both theoretical considerations and the evidence in this and other empirical papers, there is no single multiplier for all times and all countries. Multipliers can be higher or lower across time and across economies. In some cases, confidence effects may partly offset direct effects. As economies recover, and economies exit the liquidity trap, multipliers are likely to return to their precrisis levels. Nevertheless, it seems safe for the time being, when thinking about fiscal consolidation, to assume higher multipliers than before the crisis.

This can be read as saying no more than that macroeconomic models and the forecasts they generate need to be more sensitive to context.

Alternatively, it can be read as saying that such modelling strategies are fundamentally flawed. Fiscal multipliers should not be treated as parameters. They are endogenous. That would imply that they should be modelled explicitly. But if confidence is a part of shaping their values then they may, in principle, be impossible to estimate. So a more radical reading – one which would no doubt be favoured by many more heterodox economists – is that this whole enterprise is doomed. The Blanchard and Leigh paper should be read as one more – and possibly the final – nail in the coffin of macroeconomic forecasting. All such forecasts should be treated as no more than guesswork.

Blanchard and Leigh assert that “As economies recover … multipliers are likely to return to their precrisis levels”. How do they know? Economists didn’t expect the multipliers to go haywire once austerity was implemented, proving wrong what had previously been widely accepted as correct. Why should we expect things to return to “normal” once economies recover? Indeed, their argument takes the period 1997-2008 to be “normal”: given the spectacular and unsustainable run up of public and private debt during this period, in what sense was it normal? It is possible that it offers us no guide to what is going to happen when economies recover, particularly as the political expectation is that even if the economy recovers austerity policy – if less aggressive – will be with us for a long time to come.

The implications of this argument are therefore perhaps more profound than the authors intend. And they strengthen the hand of those who argue that we need different types of economic knowledge. Those are not necessarily new types of knowledge. The urgent task may be to recover what we lost as a result of the ascent of formalism über alles.