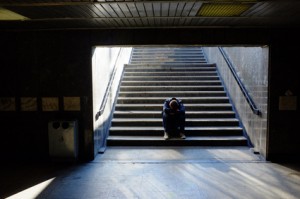 Plenty of political announcements made at this time of year are little more than conference fodder. They grab a headline and a round of applause and that’s the last we hear of them. But George Osborne’s proposals to cut another £10bn from welfare don’t fall into that category. They were buried in the detail of previous policy statements and it was only a matter of time before they bubbled to the surface. Conference season is the ideal time because it allows some posturing against the modern folk devil – the feckless scrounger.

We only have media reports of Osborne’s speech at the moment, and we’ve no idea what’s going on behind the scenes, but a key element to this story is going to be how it plays out within the Coalition.

Clearly the New Victorians of the Conservative party are full-speed ahead for cutting welfare, with a strongly Malthusian undertone that if we lose a few scroungers along the way through starvation then that’ll save us a bit of money.

But the Liberal Democrat position is a bit more complex.

Actually, that isn’t all that complex. My sense is that the bulk of the grassroots are against further cuts that impact disproportionately on the poor. They are in favour of doing more with taxation, particularly of wealth; even more specifically, of housing wealth. The leadership seems a bit more uncertain in its views. Some prominent figures have suggested that they are against any further cuts to welfare. Others – in the Cleggite tendency – have suggested that they would be willing to countenance welfare cuts as long as it was evident that the better off are going to carry a significant burden in any further attempt to close the budget deficit.

This is where it gets politically interesting. Osborne seems to have ruled out the Liberal Democrats’ favoured Mansion Tax and has set himself against any form of recurrent wealth tax. But he has hinted that the rich will be asked to make a further contribution in some unspecified way. If it’s not through higher income tax or wealth tax – both of which have been ruled out – it’s a bit of a puzzle as to what that might be.  If it’s messing around with tax allowances or avoidance schemes then it shouldn’t really be given the time of day as a substitute for a wealth tax. But we’ll wait and see.

I’m more concerned about the process here. It appears that the Conservatives are saying that they’ll need to move ahead with cuts to welfare now because it will need legislation. But they have “promised” the Liberal Democrats that measures to ensure the rich will contribute will follow in due course.

If the Liberal Democrat leadership accept that position then frankly they are dafter than I thought.

The history of the Cameron Conservatives and the Coalition already indicates that such promises are worth nothing.

Let’s leave aside “no top down reorganisation of the NHS” and “the greenest government ever”. A referendum on voting reform to be conducted in a non-partisan manner? Of course. Right up until the point that it looks like the No vote might lose and Conservative interests are threatened. Then Conservative-orchestrated negative party political campaigning kicks into gear.

Lords Reform? Of course. Right up to the point at which it comes to delivering it. At which point David Cameron has to turn to Nick Clegg and say that it isn’t going to happen.

You can see it happening again here.

Welfare cuts affecting the poorest? My pleasure.  Rush them through as fast as possible. Need to tackle the skivers.

Let’s see if it’s possible to avoid that scenario. In an attempt to get beyond this suspicion that they’re less than reliable, perhaps the Conservatives will volunteer to bring in the measures affecting the rich first – so there’s no question they’ll deliver – before moving on to further welfare cuts.