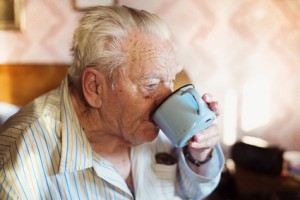 We all know that the talk of compassionate conservatism that characterised the early years of Cameron’s leadership was quietly dropped. When one of your main political strategies is taking money from the poor and disabled – reducing thousands to penury – the whole compassion thing comes across as a bit incongruous, regardless of how often you claim you were doing it for their own good.

While the party had sought to shed its image as the nasty party this proved too much of a stretch. Critics claim that the mask has slipped: there is clear evidence that the party has reverted to type.

Whether or not that is the case, we got an illuminating insight into the thinking of one of the party’s favourite think tanks today. One of the fringe meetings at the Conservative Party Conference last night focused on cutting public spending, and pensioner benefits in particularly. The BBC reports Alex Wild of the ironically named Taxpayers’ Alliance offering a bracing rationale for moving early to save money:

The cuts should be made “as soon as possible after an election for two reasons”, said Mr Wild.

“The first of which will sound a little bit morbid – some of the people… won’t be around to vote against you in the next election. So that’s just a practical point, and the other point is they might have forgotten by then.”

He added: “If you did it now, chances are that in 2020 someone who has had their winter fuel cut might be thinking, ‘Oh I can’t remember, was it this government or was it the last one? I’m not quite sure.’

“So on a purely practical basis I would say do it immediately. That might be one of those things I regret saying in later life but that would be my practical advice to the government.”

There you have it. The Government should move sooner rather than later because there is a good chance that those affected will either be dead by the next election or sufficiently confused that they won’t be in a position to blame the government. Presumably cutting benefits like the winter fuel allowance will significantly increase the chances of the former outcome, given that reducing excess winter mortality is, in part, the point of the benefit.

At the level of realpolitik you can quite see that these are the sorts of considerations that some politicians might weight in the balance. But it is unusual for them to be spelt out quite so candidly.

Of course, that the Taxpayers’ Alliance advances such arguments does not mean that all those in the Conservative party agree.

But perhaps we should apply some consistency.

Jeremy Corbyn was criticised yesterday afternoon for condoning protesters spitting at journalists in Manchester. Many on the right took to social media to argue that those few uncouth protesters were Corbyn’s responsibility, and conclusively demonstrated that his new type of politics was a sham. It was not a politer style of politics. It is unpleasantly confrontational. And the fact that Corbyn did not issue a condemnation instantaneously proves he’s just as bad. The fact that the vast majority of the protest was peaceful was largely ignored. The fact that we didn’t know who was doing the spitting or whether they were, in fact, Corbyn supporters was ignored. They were anti-austerity protesters. Corbyn is anti-austerity. Ergo he is to blame.

By analogy, unless David Cameron publicly disowns the views of a single TPA spokesman then we can only assume he condones political strategies premised on the idea that those who are negatively impacted by his policies, and who therefore might object to them, will be dead or demented by the date of the next election. Clearly this is authoritarian politics at its worst. Inhumane. If Cameron doesn’t come out with a strong condemnation of such callous political machinations we can only assume that what he really aspires to is a one-party state governed for the benefit of the rich, once all his political opponents have been killed off. Disgusting. Unfit to govern.