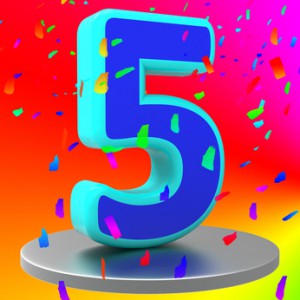 This blog opened for business five years ago today. The first post was Can the Big Society be anything more than BS?, reblogged from Liberal Democrat Voice. It felt like quite a big step to strike out on my own rather than post occasionally at group sites. The most recent post – yesterday’s Compassionate friends of Conservatism – just tipped me over 600 posts.

A blogging anniversary is conventionally a time to pause and reflect. I did so on the blog’s second anniversary – Reaching the terrible twos – but I don’t think I’ve done so since. Last year I was knee deep in party conference season and the anniversary was marked with a post originating at a fringe event about The Orange Book – Notes from a small gathering.

I guess reflection might be even more in order this year because quite a lot of blogs fall silent long before they reach the five year mark. So I’ve longevity on my side. Not only that but this blog apparently gets used as a case study in talks about blogging for and by academics. It occasionally get accused of thought leadership and suchlike.

Unfortunately, I’m not entirely sure I have.

I keep trundling on, doing my thing. But over the last six months it has become noticeably harder. For four and a half years I averaged about 10 posts a month. Over the last few months I’ve been averaging more like four or five.

In part this is simply because other commitments got in the way. I usually blog late at night or when I’m travelling – which quite often coincide. But I’ve seemingly had so much else on that I haven’t been able to blog as frequently as before. Often it’s simply because I’m knackered.

But I have also moved away from blogging regularly in order to blog regularly. Instead, I’ve blogged when I’ve felt the urge. And the urge does not visit me quite so often these days. I am determined that I am not going to recycle material, which is the way that some professional bloggers keep the posts flowing. Nor am I going to start blogging about my shopping trips or holidays or any of that sort of stuff, just to have something to write about. It’s not that type of blog.

Since the election in May I have often struggled to get beyond the urge simply to write “Gosh, isn’t it all just totally awful” in the face of one or other benighted aspect of the current Government’s agenda. That’s hardly illuminating. So I’ve stayed quiet.

It feels like I’ve defaulted to writing about housing policy even more often than previously – simply because that is home turf and an area in which I am constantly encountering new material.

So what few scraps of insight have I gleaned over half a decade of blogging? Nothing startling, I fear.

First, I find it almost impossible to tell which posts will attract a lot of traffic and which will sink without a trace. Posts that I’m rather pleased with sometimes fail to reach three figures in terms of views. And some that I thought were no better than ok have racked up hundreds, or thousands, of views.

Second, timing is everything. But sometimes it is nothing.

If you are going to blog about politics and current affairs then often you have to do it now or not at all. Some blogposts are like fireworks. They’ll rocket up into the sky – with the view count rising by the second for an hour or so – and then fizzle out just as rapidly.

This need for quick response doesn’t always sit well with the demands of the day job. Or with the rhythms of activity familiar to the typical academic.

For some stories and issues you have to get your post up not long after the story breaks. Otherwise no one will be interested, or most of what is interesting will already have been said.

Yet, for other news stories or issues the pressure is not so urgent. You can take a day or two to reflect before writing something. The post may then clock up views over the course of a few days or weeks.

Spotting which is which is the challenge. I’ve not found a surefire way to do it, but it feels like the less pressured posts usually deal with something a little off the beaten track. They address a topic of interest, but not one of such prominence that every other mainstream and social media commentator feels obliged to express a view on it.

Very occasionally a blogpost is a real slow burner. If you’re a regular reader you will know that my most popular post is Why is Owen Jones so annoying?, which I wrote back in 2013. It has had a lot more views in 2015 than it did in 2013. I benefit from the fact that the title captures what is seemingly a perennial question, and if you type the question into Google my post is somewhere near the top of the list.

Third, and following on from that, titles can be important in attracting attention. But a post might thrive under a bland title. This is not really news. Academics have the same thing drummed into them in relation to journal articles.

Some of my titles are terrible. Some I quite like. This is not necessarily a function of how much thought goes into them. Some of those that were laboured over mightily are among the worst (this one being the most egregious). The titles I’m probably most pleased with are Clegg courts catastrophe, where ‘courts’ does double duty, and Refreshing Beveridge, which works even better with the featured archive photograph of the man himself. I have, you may have noticed, an unhealthy attachment to alliteration. But occasionally it serves the purpose.

It is worth revisiting the title of a post once you’ve written it so you’ve got a clearer idea of what it actually covers. Inspiration may strike. I wrote a post the other week which went under the working title Housing Policy Talk. That is clearly awful, but I was stumped for anything better. At the last minute it became Sell offs and sell outs, which is, at least, marginally more intriguing.

Fourth, different posts will be picked up through different channels, and at different times of day. Some posts fly on Twitter, others attract most of their attention via Facebook. For me the posts about poverty and related topics are much more likely to get traction on Facebook than anything else I post. Some take off in the morning, others late at night. Some never take off at all. The correlation between RTs/Likes and views is extremely loose, if not non-existent. I’ve had posts that were running at one RT for every three views. And posts that have had hundreds of views per RT. You never can tell.

Fifth, standard blogging advice is to aim for 500-700 words per post. I certainly have posted at that length, but more usually I default to around 1,000-1,200 words. I’ve no idea whether that impairs the volume of traffic I get. But it feels right to me. It’s enough to allow me to say what I want to say. And it is about where we are now. So it must nearly be time to stop.

I wonder whether I’ll be marking the anniversary of a full decade on the blog? At the very least, I’m not planning to call it a day just yet.