Why is Owen Jones so annoying? 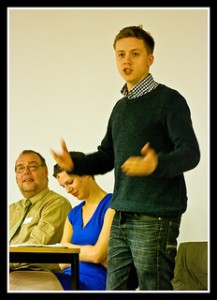 The Independent columnist Owen Jones occupies a slightly strange position in the political landscape. He has been ranked in various lists as one of the most influential thinkers on the left. He has a reasonably high profile in the broadcast and print media. He’s quite active on social media. Yet his political stance is not one that is leading any debate that I’m aware of. Quite the opposite. The Labour party generally seems to do its utmost to distance itself publicly from the sorts of positions that Jones espouses. That process has gone into overdrive this week in relation to the Labour response to George Osborne’s cuts in social security as part of the Spending Review. The debate between Jones and Simon Danczuk, first on Twitter and then on the Daily Politics a couple of days ago, being the most extraordinary manifestation of this.

Whether there is more sympathy for Jones’ stance in private in Ed Miliband’s camp and the shadow front bench have been warned off attacking him, as Dan Hodges suggested in the Telegraph the other day, is impossible to say. That could just be the ultra-Blairite Hodges making mischief for Miliband. Certainly Jones has stated on social media that he doesn’t recognise the situation as described by Hodges.

George Osborne and chums must be loving watching Labour tear itself to bits on the seven day wait welfare hand grenade that he lobbed into the debate. Once Ed Balls stated that Labour would consider whether the policy saved money and worked – rather than rejecting it outright as unacceptable in a civilised society, for example – the scope for some serious left on “left” friendly fire was obvious to all. Presumably that is what Osborne was hoping for when he proposed the policy change, alongside the sadistic pleasure of inflicting more misery on the poor.

I met Owen Jones briefly and he was perfectly pleasant in person. But there is something about his public persona that gets up people’s noses. I’ve been reflecting on what it is that makes Jones so annoying to so many people.

This is what struck me:

Owen Jones has a following. There are people ever ready to leap to his defence. I don’t see myself especially as a supporter, and I don’t feel he always does himself any favours when trying to make his case, but I think it is good that the sort of views he espouses are part of current political debate. If nothing else, they remind us – those of us old enough to remember – what the world used to be like; of the territory upon which political debate used to occur. And, if we were optimistic, we might think that if things have travelled so far in one lifetime it is not impossible for them to travel back the other way. We might hope that at some point people finally realise that a world founded on individualism and self-reliance is unpleasant for the many, not the few, and is ultimately incompatible with dignity for all. We need to move beyond talk of dependence versus independence and recognise that we are inter-dependent. And that there is such a thing as society.