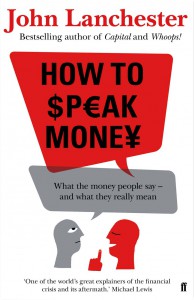 Yesterday evening the Festival of Economics 2014 kicked off with the author John Lanchester in conversation with Izabella Kaminska of the FT. Lanchester, who is promoting his book How to speak money, had some very interesting and important things to say about the language of finance.

His key point was that the fact most people don’t understand or engage with the language and practices of finance has consequences. It means that bankers and economists are able to get away with obfuscation and mystification in order to hide their own ignorance or render opaque activities of very questionable social value. Because most people don’t really understand what is going on in finance they do not appreciate the risks that are being run or the ethics of some dubious practices. This lack of knowledge reduces public demands for greater regulation of the financial system, to the great benefit of the financiers.

But it is not simply the bankers and the public who are in the dark. Lanchester noted that last month the US bond market witnessed a seven sigma event – in terms of the volatility of short term interest rate movements. This is something which, if the models commonly used to analyze financial markets are right, is near impossible. The most obvious conclusion to draw, therefore, is that the models are wrong. So the analysts are in the dark as well.

Lanchester discussed the dissociative dimension of the language of finance. When bankers talk in terms of growing profit and minimizing loss, of downsizing and rightsizing, of effective utilization of assets and of maximising value for money these all entail actions that have real human consequences. The ‘technical’ vocabulary of finance is shot through with euphemisms that shield its practitioners from having to face these consequences directly. It is only in moments of unusual clarity that bankers recognize this.

Perhaps the most important topic the session touched on was developments in the shadow banking system. For a while now this has been a cause for concern. At least it has for just about everyone who actually understands what is happening. Lanchester noted that the Bank of England estimates the shadow banking system is now around the same size as the total GDP of planet earth. But it is an area of the economy that is lightly regulated. Indeed, it has been likened to the financial Wild West. Lanchester noted that there are plenty of financial insiders who are expecting the next crisis to originate in the shadow banking system. And it is not a question of whether we have such a crisis but when. It would appear that the sentiment out there is that the answer to the “when” question is: sooner rather than later.

At one level that is not surprising because the financial system remains largely unreformed after the 2007-08 crisis. But at another level it is vaguely terrifying. The implication is that the next crash will be bigger than the last one, and governments, substantially weakened by actions after the last crash, will not be able to fend it off.

It may be that it will take the whole system to go into meltdown to seriously disrupted the power relations of the financialised economy, Only then will politicians will have the gumption to take decisive and meaningful action against the rentiers. Or be compelled to by popular unrest.

I live-tweeted some of the session yesterday. I bunged my tweets into Storify: