Is financial innovation a good idea? 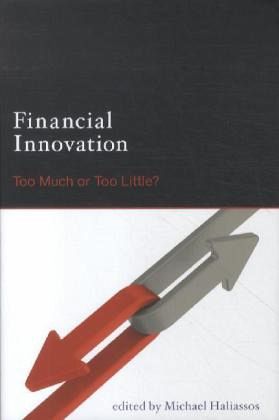 Is financial innovation a good thing or a bad thing? Is it possible to tell in advance? Some might recall Warren Buffett’s comments in 2003, when he characterised derivatives as financial weapons of mass destruction, and suggest that perhaps it is.

We know that novel, complex and non-transparent financial products were at the heart of the Global Financial Crisis. So should we draw the conclusion that financial innovation is inherently problematic?

Or should we conclude that the problem was, on the contrary, that the crash of 2007-2008 and its aftermath are in part a result of a failure to innovate sufficiently. From this perspective, more, and possibly more complex, financial innovations could have averted the recent and ongoing economic catastrophe.

This is the territory which a new book entitled Financial innovation: Too much or too little?, edited by Michael Haliassos, seeks to explore. The book originates in a symposium held in Frankfurt in 2009 in honour of Robert Shiller.

The editor is upfront about the perspective on offer (p.i):

The contributions that follow don’t all, it would be fair to say, take quite such an uncritical stance towards financial innovation. Indeed, the editor himself qualifies the position somewhat as he develops his discussion. There are, nonetheless, some comments that struck the wrong note for me. For example, a little later the editor notes (p.viii):

The policy and regulatory environment is crucial to the process of financial innovation. Regulation can prevent useful innovation from happening but, interestingly, it can also encourage beneficial innovation aimed at circumventing the rules.

It isn’t exactly a secret that financial institutions will spend time and money trying to come up with new ways of evading regulatory requirements. We note Andrew Tyrie’s recent calls for electrifying the Vickers ring fence. But this is the first time that I’ve encountered these activities portrayed in quite such positive terms.

Perhaps a more common strand of argument in the book is that complex financial innovations may well be sensible, and indeed beneficial, in theory. It’s just that they didn’t work out to be quite such a good idea in practice. But what lesson do we draw from that? One view would be that we shouldn’t place too much weight on the untested theoretical benefits of innovation in guiding our thinking. An alternative view is that we need to reform reality so as to bring it into closer alignment with a more fully elaborated version of the theory, an approach the anthropologist Danny Miller referred to years ago as “virtualism”.

Shiller points out that the securization of mortgages, even of subprime mortgages, … was an a priori positive development. It was subsequent bad use, lack of transparency, and the failure of rating agencies to assess the risk of securitized products that contributed to the ensuing crisis.

Similarly, Issing, writing from a rather more critical stance, notes that (p188):

During the recent crisis financial products like collateralized debt obligations and credit default swaps proved easy to abuse. This does not mean that these instruments are flawed by construction. However, if agents think they cannot be held responsible for their transactions, they will not care about the outcome for other agents.

There follows some sensible suggestions for how one might try to mitigate the risks of financial innovation, including an endorsement of the BIS proposal for financial product registration and testing to assess the implications of products for systemic risk. There is also the suggestion that greater transparency is required because a key problem has been asymmetric information: it is the opacity that follows from complexity which allowed financial institutions to sell on unsuitable products. Barberis, in his chapter framed from the perspective of behavioural finance, argues a slightly different point: he suggests that complexity may mean that even the originators didn’t understand the risks involved.

Part of the problem of the mid-2000s financial innovation was that where it was possible for originators to offload the whole of the risk to someone else then it ceased to be a live issue of concern for them. So, finally, Issing argues that one way of concentrating the minds of originators is to require that they retain a proportion of the risk associated with their financial products on their own balance sheet.

There is plenty more detail in the book that is worth reflecting upon. The chapter by Susan Smith on the links between the housing market, the mortgage market and the financial markets is worthy of a separate post of its own. Here again the suggestion is that innovation in the housing sector has been insufficient and unbalanced. It has all been focused upon debt, and none of it has been focused upon assets and the risk associated with house price movements. The prescription therefore is more, but different, financial innovation.

Overall, though, the book feels a little complacent to me. It has rather too much of a feel of being an apology for the status quo. Perhaps that is to be expected given the profile of the contributors. Susan Smith’s position is distinctive as the lone geographer among economists. Most of the contributors are academic economists intimately associated with some key financial innovations. But there is also a sprinkling of central bankers. It would be unlikely that they were going to come out in favour of completely rethinking of the system.

Even so, Issing approvingly quotes Adam Smith’s Wealth of Nations:

But those exertions of the natural liberty of a few individuals, which might endanger the security of the whole society, are, and ought to be, restrained by the laws of all governments; of the most free, as well as of the most despotical. The obligation of building party walls, in order to prevent the communication of fire, is a violation of natural liberty, exactly of the same kind with the regulations of the banking trade which are here proposed.

The contributors, of course, make reference to issues of misaligned incentives and moral hazard. There are occasional references to abuse of financial instruments or bad practice. There are certainly calls to educate consumers into a more sophisticated understanding of financial products so they are better able to protect themselves. But there is limited engagement with fundamental questions about the culture of the financial services industry or whether much financial innovation is of limited use to society but of considerable use in enriching its originators. 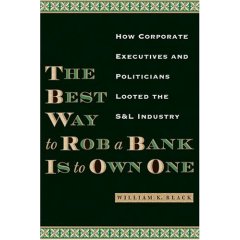 I am struck by the fact that if you set the type of conventional economic discussion found in Financial Innovation against something like William Black’s The best way to rob a bank is to own one it not only feels rather anodyne but, as a consequence, has an air of unreality about it. While there might be calls for stronger laws and better investor protection in Financial innovation, Black’s concept of control fraud is nowhere to be found. You will look in vain in the index for any entry for fraud or exploitation, rent-seeking or profiteering.

Perhaps a volume of essays in honour of Robert Shiller isn’t the right place to discuss such matters. It would all seem a little vulgar. But it is impossible to address the question of whether there is too much or too little financial innovation without asking rather sharper questions about the nature and culture of the industry within which they originate.