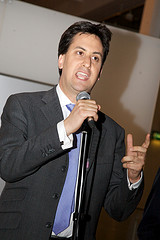 ou can find one or two brave souls who are willing to put a positive spin on Ed Miliband’s speech to the Labour party conference yesterday. But the dominant view among the commentariat seemed to be that it all felt rather flat and unfocused. Given this was the last big set piece before the General Election that has got to be a worry for the Labour party. Hasn’t it?

Miliband’s omission of the passage on the deficit generated a lot of excitement, although it seems likely that this was a genuine failure of memory rather than a strategic omission. He would surely have realized that any such intentional omission would be jumped on, given that it had been pre-briefed to the media. He would, wouldn’t he?

I’m not surprised Miliband forgot some of the speech. Not just because it was long, but because it lacked much shape. I wasn’t able to watch the speech being delivered but I’ve read it and it lacks any clear structure or sense of direction. It also lacked much in the way of light and shade; highs and lows. I’m not sure it will keep students of political oratory detained for very long, except perhaps as a salutary lesson on the pitfalls of overdoing the empathy and attempts at humanisation.

Others have been more scathing. After spending several paragraphs picking out some modest positives from the speech John Rentoul finishes by summarizing with this zinger:

I thought it was lamentable, weak, clichéd, embarrassing, uninspiring, stylistically inept, vacuous, unambitious, grandiose, cringeworthy, patronising, foolish, an unappetising blend of impossiblism and incrementalism, and a complete and final disaster for the Labour Party.

On Twitter Iain Dale captured the sense of under-performance and an opportunity missed rather pithily:

Last year @Ed_Miliband nailed it. This year he hasn’t even managed to pick up the hammer.

Looked at dispassionately, I thought the speech’s use of the motif contrasting “together” with “on your own” worked quite well and wasn’t overdone. This picks up on something important. It is only through rekindling a greater sense of social identification that the sort of agenda Miliband aspires to deliver will enter the realms of possibility. People have got to be convinced – or rediscover – that positive change requires greater collective endeavour. The trick is calibrating that message so that marginal voters don’t take fright: you don’t want them to think you’re hinting at a return to the dreaded s-word.

On the other hand, I though the incidental potshots at Nick Clegg were implausible. The idea that Clegg’s broken promise on tuition fees destroyed trust in politics is laughable. Clearly the tuition fees incident didn’t help, but politics was hardly held in high esteem before that. Current squabbling over delivering on promises made during the Scottish referendum surely isn’t helping.

And that cheap shot at Clegg led on to the most peculiar aspect of the speech. Miliband makes a big fuss about politicians making promises that they don’t keep. He then goes on to set out his “six national goals” for the next Labour government. In themselves the goals are, as far as I’m concerned, reasonably sensible and desirable. But they are either rather vague aspirations or, where expressed in more concrete terms, make no acknowledgement of the challenges that will need to be overcome to achieve them.

The goal to build 200,000 homes were annum, which is one of the six, has now been knocking around for a while. And Labour are still to come up with a very clear set of mechanisms through which to make this happen. If they are ruling out relaxing borrowing constraints for local authorities, which it appears Ed Balls did on Monday, then they have made the task of reaching their own goal that much harder. It may be that the Lyons review pulls a rabbit out of the hat. But if the rabbit doesn’t entail more borrowing for local authorities then I’ll be very surprised. All the other mechanisms, which rely on increasing the responsiveness of the private sector, will take quite a while to feed through into increased output.

The challenges to be overcome in meeting the other five goals are equally significant.

There is no reason to doubt the sincerity with which Miliband states his aspiration to attain these six national goals. But there is plenty of reason to think that he will struggle to do so, even over his extended ten year time horizon. In which case he will be rather hoist by his own petard. Perhaps he might then reflect on the possibility that others who have been unable to deliver on pledges and promises were acting in good faith but were victims of circumstance, institutional inertia, or political arithmetic.

Miliband’s speech touched on quite a wide range of issues, without offering very many specific proposals of great substance. There is plenty we could pull apart if we were so minded. But the overarching point is that it is rather thin – on detail, on policy proposals, on aspiration and inspiration.

I was trying to think of an appropriate way to summarize how I felt about the speech and then I came across this passage by Caron, which captures my own position rather well:

I have to be honest, though, and say that while I feel a bit exasperated by Ed’s speech today, it didn’t turn my stomach in the way that I know David Cameron’s will next week when he comes over all isolationist Little Englander who can’t wait to take away all our human rights.