The Commentariat might, for once, be pretty much unanimous. The run up to General Election 2015 is going to be vicious. The focus isn’t going to be measured debate on the pressing issues of the day – when was the last time that happened? – but mud slinging and character assassination. There are plenty of people willing to assert that the Tories, under the baleful influence of Lynton Crosby, are going to run the dirtiest campaign since the 1992 campaign to see off Neil Kinnock. The Tories, rather predictably, deny this is their strategy.

The Labour high command have been out in force over the weekend making the case that the Tories are going to be run a “fear and smear” campaign. Ed Miliband has claimed that David Cameron is demeaning the office of Prime Minister by stooping to unacceptably low tactics such as seeking to use the manifold failings of the egregious Rev Flowers as a stick with which to beat Labour. Insinuation of incompetence and unsuitability by association is a key part of the game plan, it is claimed. Labour’s Election Campaign organiser, Douglas Alexander, in an interview in the Guardian yesterday highlighted, among other matters, the importance of an effective social media operation in countering the smears. He argued that: “You have to counter lies with truth. When your opponents smear and vilify, you have to respond quickly and effectively with the facts”.

There are some obvious responses to Labour’s pre-emptive attempt to grab the moral high ground. We can be reasonably confident that it is about more than simply defending their good name.

What are they up to?

It may just be that they are trying to frame the debate in a way that buys them a bit of sympathy. This week we discovered that “bedroom tax” made it on to the OED shortlist for the word of the year. Whether you agree with it or not, getting that term to stick was a brilliant piece of policy framing by Labour. Embedding the slogan “fear and smear” into the minds of the electorate early on in the election campaign would provide a lens through which Tory attack strategies will be interpreted.

It does, however, run the risk of backfiring.

Not all criticism represents an attempt to smear. Seeking to represent it as such risks being seen as thin-skinned, unwilling to engage, and unwilling to learn. Labour did plenty wrong in government before 2010. And there is plenty to say about the inadequacies of its policy positions in opposition, such as they are. Similarly, you could accuse much of the Labour front bench of being invisible and ineffective and that would hardly constitute a smear. It is entirely fair comment.

When the attack strays from the substance of the issues and touches on personal morality, relationships or youthful indiscretions that we head for territory where the aim may be to smear rather than critique. But even here it is perfectly possible for criticism to be appropriate and justified. One person’s smear is another person’s probing interrogation of suitability.

The other risk for Labour is that by setting themselves up as the wronged innocent party they invite reflection on their own behaviour. It was only a couple of months ago that we were all being regaled with the activities of Damian McBride. Add the clandestine manoeuvres of Alastair Campbell to that mix and you get just as unedifying an approach to politics as that currently being attributed to the Tories. It also places a large question mark against the claim that the Labour PR operation is wedded to countering lies with truth. The hypocrisies of the Blair-Brown era cast a long shadow.

That is not to say that Labour are necessarily in the wrong this time round. The way the Tories have approached the Flowers debacle is highly questionable.

Some of the insinuations about the links between the Labour party and the Co-operative movement are a little bizarre. It’s as if the Tories are trying to suggest this is an inappropriate entanglement that the Eds cooked up with the crystal Methodist over the last few years. Yet those links have historically been absolutely integral to the labour movement. That can only be news to those ignorant of political history. That the exploits of the errant Rev Flowers are being allowed to impugn, by association, the whole idea of mutualism and co-operation is a great sadness.

Flowers may well have been appointed in the dying days of the last Labour government. He may well be a Labour supporter. He may well have had a rather questionable business record. And he may well have known next to nothing about banking. There seems little doubt that he was not an obviously well-qualified candidate for the most senior role at the Coop Bank. But he didn’t run the Bank on his own. Where are the questions about the competence of the rest of the Board? Or the Executive. It would be appropriate to ask questions about regulatory oversight on the Coalition’s watch. Or the Chancellor’s seeming disinclination to strengthen the scrutiny of bank governance.

The whole Tory strategy could backfire if Labour were to manage to reframe the problem to point out that the wheels fell off at the Coop Bank while Osborne and Hoban were in command.

If the “fear and smear” strategy does come to pass then that will no doubt do damage to the Labour party. It will probably do damage to the Conservative party – signally more clearly than ever that it has given up on modernisation. But more importantly it will do damage to politics. It will be yet another turn-off for voters and potential voters. The country faces major challenges. Some of them are on the political agenda, but some – such as the pernicious effect of financialisation on the UK economy or the perverse proposals emerging from the Government to cut funding for scientific research – hardly get a mention. And some – such as the progressive erosion of democratic rights in the name of security or global trade – political elites would rather conspire not to talk about.

Politicians preoccupied with slinging mud at each other would be unedifying at the best of times. It is utterly irresponsible when what is required is genuine debate, vision and leadership.

The longer you observe our political system the more you are tempted to think that it is broken. And that it is unsustainable. But it appears incapable of reforming itself. So what could happen to break it out of this cycle of decline? 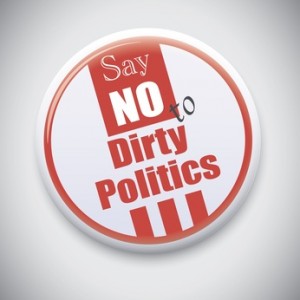