Never mind possibilities for our grandchildren, what about our children? 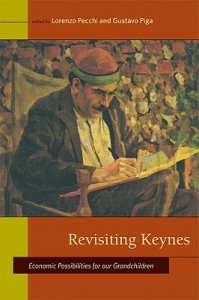 In 1930 Keynes wrote his famous essay Economic Possibilities for our Grandchildren. In the essay he made a range of predictions about what the world would be like a hundred years hence. At the heart of the exercise was the impact of increasing productivity and rates of economic growth compounded over several decades. The result would be hugely expanded levels of economic output. In this respect he was correct, although in fact he rather underestimated the rate of growth in economic output over the subsequent 80 years.

But Keynes also envisaged a world in which productivity growth would be such as to create permanent technological unemployment. That is, it would not require all the available labour force to produce all the goods required to satisfy human need. As a consequence, a few people would be fully employed but most people would only have to work part-time. The later would appreciate the sustaining contribution of those who worked full time, for the benefit of all, but there was no longer a need for everyone to devote themselves so exclusively to the pursuit of mammon. The part-timers could turn their minds to higher things: they could devote time to other voluntary activities or cultivate the virtues of the arts and literature.

A few years ago Pecchi and Piga edited a very interesting book called Revisiting Keynes in which a selection of leading economists provided their perspective on what Keynes got wrong and what he got right. A fairly obvious criticism of Keynes’ position is its liberal elitist bias and its rather disdainful attitude towards “trade”. Equally, his chronology was a bit wonky, if you take “grandchildren” literally. But two more profound criticisms meant that he was, overall, rather wide of the mark.

First, he assumed the demand for goods could be satiated. That is, at some point we wouldn’t demand more and more ‘stuff’ so it was possible for productivity growth to do its business and reduce the demand for labour inputs. We have subsequently (re)discovered the importance of relative demand, status effects and positional goods. Once we bring relativities into the picture, and acknowledge arguments such as Thomas Frank’s positional arms-races, then in principle demand for goods is insatiable and infinite.

Second, he assumed that it would be unproblematic for redistribution to occur from the remaining producers to the part-time workers, in order to ensure they had sufficient income to meet their needs. So there were some strong assumptions about tax morale embedded in the analysis. In contrast, if we are seeing anything then it is a decrease in tax morale. The rich are very definitely trying to buttress the view that wealth and entrepreneurship are highly correlated, that the economy would collapse without entrepreneurs, and it is therefore essential that the wealthy are not heavily taxed because otherwise the economy would suffer terribly. This story of course entirely ignores the fact that there has been a massive redistribution towards the rich over the last thirty years, without a corresponding explosion in real entrepreneurial activity. But that’s an argument for a different day.

Keynes’ essay came to mind again recently. Perceptive observers of big picture are returning to ask some very similar questions about where the economy is heading at the moment. In particular, the issue of the impact of technology on labour demand is very much back on the agenda. The cost of robotic technology is falling, while sophistication is increasing. The scope for automating production – and indeed, increasingly, the automation of services – continues to expand. While skilled jobs may be disappearing, the jobs being created are predominantly low-skilled, insecure and low paying. Frances Coppola explored the potential consequences of this process in an interesting post at Pieria today. She highlights a major contradiction: automation may improve profitably but it removed demand because most people no longer have sufficient earnings to buy anything but essentials. The net result could be a very sickly economy. To ward off this fate would require significant redistribution.

Frances’ post was a response to a post by Chris Dillow looking at the feasibility of a Basic Income. A Basic Income has much to commend it from a range of perspectives. It can reduce the potential for unlimited degradation of working conditions and can reduce job mismatch because unemployed workers aren’t obliged by brute necessity – to say nothing of unenlightened workfare policy – to take the first job that presents itself, however unsuitable.

But it runs up against a major challenge. Here we have to return to the redistribution point, taken as unproblematic by Keynes. Chris argues that arriving at an affordable Basic Income would not in fact be so much about further redistribution as about replacement or significant redesign of existing mechanisms. However, it would make the movement of resources from the “productive” to the “unproductive” more transparent. It therefore runs up against the founding principles of the British welfare state. Not only that but it has also to face up to the fact that current policy – with its increasingly strident mantra of “something for something” – is accelerating in precisely the opposite direction. Increasingly draconian workfare is the most obvious example.

Current policy making processes seem ill-suited to engage with big picture questions about where the economy is heading. Yet, it is reasonably clear that such questions are as relevant now as they have ever been – both as a result of technological change and of the way in which policy is increasingly designed with the interests of the 1% in mind. Is the current direction of travel sustainable?

A further variable in the equation is the relative quiescence of the disadvantaged. Some find this puzzling. There’s a rather implausible post today at the Telegraph giving publicity to Stephen King’s new book. That’s Stephen King of HSBC, rather than of Carrie and The Shining. He is arguing that there is an analogy between causes of the 1381 Peasants’ Revolt and the gap that is opening up between the baby boomers and today’s disenfranchised young people. The analogy isn’t hugely convincing, but the post does suggest a question: what happens if economic growth – if and when it returns – never delivers rising living standards for those in the middle and at the bottom? Is there a constellation of circumstances under which the mass of people will start to demand something better than a life of low paid drudgery and a hand-to-mouth existence?

Were the London riots of 2011 the product of specific local circumstances? Or are they a foretaste of things to come? It appears that King thinks they may be a leading indicator for future discontent. That’s as may be. An equally interesting question is how the state might respond to such discontent. Will its response, in the service of the rich, be repressive and post-democratic? Or will it respond in a more progressive and liberal fashion?

To increase the likelihood of the latter we need a significant reorientation in thinking about the nature of our social order and the place of work within it. We also need to think about interconnections between the fate of the poor and the fate of the rich. Leaving aside genuine altruism, perhaps the rich might realise that enlightened self-interest would suggest there is wisdom in a change of direction towards greater redistribution.

One thing is sure. Continued exploration of these big picture issues is absolutely vital.