Name a book that changed your life

Name a book that changed your life.

Michael Stewart’s “Keynes and after” > RT @umairh: Name a book that changed your life.

If anyone ever asks me a question like this I always respond with Stewart’s book, even though I can hardly remember what it says anymore.

Having tweeted, it all went a bit Proustian. Memories of the book, when and where I read it, came flooding back. And I considered whether I could really say it changed my life.

In the first term of my first year as an undergraduate introductory microeconomics was compulsory. I absolutely hated it. I couldn’t stand the dry, asocial, mechanistic nature of micro at the time. The toy worlds of stylised facts, the two person economies, the differential calculus didn’t do a thing for me. It seemed to me that if this was economics then it had absolutely nothing of any interest to say about the world. It wasn’t that I couldn’t do the maths. I’d switched to social science for my degree because I’d decided I didn’t want to continue to pursue the maths/physics route that I’d been tracing out until that point. But I couldn’t wait to chuck in economics and do something else. 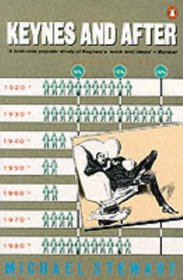 After Christmas we switched focus to macroeconomics. One of the first tasks was to deal with the prescribed preliminary reading, which included Keynes and after. I can clearly remember ploughing through the book pretty much in one sitting, rooted to my chair in my room in halls. I can remember the sense that here I’d found economists doing something useful. Addressing the big questions of the day. Making the world a better place. But Keynes and after is more than just a canter through some of Keynes’ key ideas. It conveys a sense of his iconoclasm. Of someone fighting against the system and the received wisdom.

This is the sort of stuff that people who start studying economics are often searching for, but they often don’t find.

But Keynes and after also conveys a sense of a rather more interesting and rounded person than the world of micro ever did. With Keynes it wasn’t just fixed exchange rate regimes and fiscal policy, but also the arts, literature, ballet. Half a century after its heyday the Bloomsbury set came across as rather exotic, not to say outré, to an impressionable young chap from the provinces.

You could be a relatively normal, sociable person, and an economist. This was a revelation.

So instead of chucking it in, I decided I should stick with economics throughout my first degree. And I’ve stuck with it for a much longer journey subsequently. So Michael Stewart changed my life.

I suppose one irony in all this is that I have subsequently never really made use of mainstream macro, although I continue to dabble for my own entertainment. But I’ve been teaching undergraduate and postgraduate units loosely based around micro for the last decade and a half. However, my units are all about economics and policy – indeed probably more policy than economics. And they are intentionally pluralist and critical. All that I owe to Keynes.