Can we, should we, de-residualise social housing? 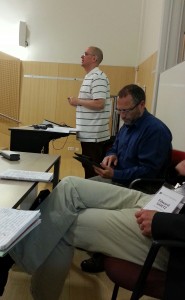 At the ISA RC43 Conference in Amsterdam last week I took part in a Roundtable discussion convened by Ken Gibb (Glasgow) on the possibilities of deresidualising social housing. I participated alongside Professors Ed Goetz (Minnesota), Rachel Bratt (Tufts) and Mike Darcy (Western Sydney).

This is what we were there to discuss:

In an age of mass home ownership, but one also characterized by an ageing society, public austerity, sovereign financial crises and other sources of anxiety and uncertainty, it may seem counter-intuitive to assert a case for a broader and stronger non-market housing sector. But on the other hand, these risks and uncertainties need to be insured against and one important way to do this is to provide adequate, secure affordable housing suitably embedded in the wider community, economy and housing system. The demand for and opportunities arising from ‘smart’ social housing may be substantial and enduring. After a brief introduction from the chair followed by three five minute contributions from the international round table, we will debate the future of social housing via a directed discussion from the chair involving the full participation of the audience (and not just the speakers). Key questions include:

• What are the standard scenarios about the future of social housing in your country? How plausible are these scenarios?
• What are the principal political, economic and social drivers shaping the scale, limits and ambition of social housing?
• Is the present crisis a threat and/or an opportunity for social housing?
• Do we see the sector playing a long term role in future mixed housing systems? If so, what will its key characteristics be? What risks must be overcome (and can they be dealt with)?

Below the fold you can find the text to go alongside my presentation. If you are a regular reader of this blog you will recognise some familiar themes, summarised for a primarily non-UK audience. But I (hope I) develop some of the arguments a bit further.

A couple of people have asked me what “de-residualisation” means, because I don’t define it in the paper below. Residualisation refers to the concentration of lower income/more disadvantaged households in social housing. This is a process that has been occurring since the 1970s. It accelerated in the 1980s and 1990s. In the 2000s government tried to combat this with the policy aspiration to create more mixed communities, although this was a means of changing the social composition of areas, rather than necessarily reducing the residual nature of social housing. De-residualisation, which I believe is a term coined by Ken Gibb especially for this occasion, is interpreted here as the attempt to increase social diversity in social housing and to move social housing to a position where it is viewed less as a tenure of last resort for the most desperate.

Can we, should we, de-residualise social housing? A perspective on developments in England