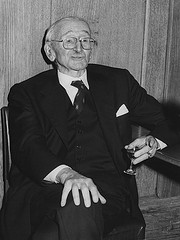 I was intrigued yesterday when a tweet with the hashtag #freedomweek crossed my Twitter timeline. I was even more intrigued when I had a look at the hashtag itself.

You may all know all about this already, but it turns out Freedom Week is a type of summer school held at Cambridge University and organised by the Institute for Economic Affairs and the Adam Smith Institute. It appears to be an occasion for the simple certainties of undiluted libertarianism to be imprinted upon impressionable young minds. You know the sort of thing that goes along with this Manichean view of the world: it’s got to be market fundamentalism (good) because everything else is “socialism” (bad, very bad).

One of the most interesting analytical questions is how political ideas are transmitted and ideologies sustained and reproduced. It is particularly intriguing when the ideas themselves have in the past been written off because they had been superseded by more sophisticated understandings. And it is perhaps, on the face of it, puzzling how it happens when the ideology, though internally coherent, provides an account of the social world that is persistently at variance with a plausible critical reading of events.

Talk of the heroic entrepreneur; the creative and innovative power of freedom-loving markets; and the sanctity of private property may be all very well as an abstract theoretical exercise. But it bears very little relation to the way society actually operates. That is nothing to do with the dead hand of the state and everything to do with being an inadequate representation of society – a representation that is almost entirely blind to the nature of real world market economies. Adam Smith had a much better understanding of the economy than most of his nominal disciples. But then he was a political economist rather than an economist.

While the sort of Hayekian fayre served up by the IEA and the ASI may bear little relation to the way in which the economy works – or ever could work – in practice, it is hugely powerful in providing an rationale for a transformative political project. Society becomes increasingly unequal and oligarchic. The restructuring of the state largely means handing control of key areas of activity to large corporate providers and in the process aligns economic and political influence, creates a range of perverse incentives and conflicts of interests. Yet, if we keep the discourse focused on individual choice and consumerism, personal freedom and responsibility then perhaps no one will notice. Arguments about inequalities in power or the capabilities necessary to achieve genuine freedom are surplus to requirements. Arguments about how markets need to be tamed – rather than reified and deified – if they are to serve rather than enslave are most definitely unwelcome.

Of course, propagation of ideologies doesn’t happen by accident. After all, the IEA allows you to download their publication Waging the War of Ideas for free. Freedom Week is one small component of that war. The rise of neoliberalism since the 1970s has been much studied. Activities such as Freedom Week represent mechanisms through which it is reproduced in spite of its failure. No doubt the Think Tanks’ corporate sponsors consider it money well spent to engrain their message in successive generations of carriers.

If all this were happening in a libertarian utopia entirely disconnected from the real world then that would be one thing. But that is not the case. The ambition is greater. Libertarians clearly seek greater leverage over the political process, because the current crop of professional politicians are simply not pro-market enough.

That is what caught my eye when scanning the hashtag for Freedom Week. It would appear that speakers had suggested that libertarians should focus their attention on the Liberal Democrats as a vehicle for putting their vision into practice. Indeed, it appears that it was suggested that it was both desirable and possible for libertarians to take over the party post-GE2015. I’m not entirely sure how such a discussion falls within the definition of an “educational” activity, but there you go.

Some of the young participants in Freedom Week continued this discussion on Twitter – discussing quite what would be required if there were to be a coup to take control of the Liberal Democrats. The exit of “social democrats” from the party is clearly a step in the right direction. If one were attempting a takeover then the whole thing couldn’t be too transparent; at least not to start with. The party’s federal structure would mean you’d need to get plenty of voting reps elected for different local parties. So maybe the strategy was to be keen and active, but not too overtly ideological. That feels like a bit of a sleeper cell operation. The alternative would be to target a few local parties and seek to dominate. That is not unlike the strategy that Unite have just adopted in the Labour party; for which it was so heavily condemned. Or, alternatively, it would be possible to campaign for OMOV: if a change in the voting rules were adopted then it could overcome the barrier that is the structure of Federal Conference.

One of the Freedom Week participants drew the attention of her cohorts to some of the challenges of transforming the Liberal Democrats into a libertarian party, having left the party because it didn’t and wouldn’t align with her view of liberalism:

The participants in these Twitter conversations would most likely dismiss them as idle speculation and youthful exuberance. They weren’t seriously planning a coup. That may well be true.

But I wouldn’t for one minute dismiss the seriousness of the intent of organisations such as the IEA and ASI. They want to reshape the world in to their preferred image. And their preferred image is not one that is to the benefit of the vast majority of people. Fellow travellers taking control of an existing political party would no doubt seem like an entirely plausible – indeed possibly the principal – option. You could argue that this has happened to the Republican Party in the US.

One of the great virtues of liberalism is tolerance. Many within the Liberal Democrats value the fact that the party has been a broad church, encompassing a broad range of perspectives across the left-right axis. However, it would seem increasingly evident that that view is not shared by all. Responses to Richard Grayson’s departure from some commentators on the right of the party have shown considerable intolerance of those who do not share their perspective. Libertarians take it a step further.

One of the challenges for a tolerant broad-church approach to liberalism is that, by definition, it does not police boundaries well. Many liberals would be reluctant to say, for example, that libertarianism and liberalism are different, and that if libertarians are looking for a political party then they should form their own. Even if one wished to do so, drawing such a boundary is by no means straightforward – particularly if intermediate forms of classical liberalism are added to the picture.

The danger is, of course, if this tolerance is not reciprocated. Libertarians are welcomed into the party, but they then turn around and start defining social liberals as “social democrats” who are not true liberals and are no longer welcome. The notion of a cuckoo in the nest inevitably springs to mind.