A few months ago the Building and Social Housing Foundation argued that one in five households could be living in the private rented sector by 2020, if current trends continue. Last week the estate agents Savills suggested that we could reach that situation by 2016. Is the housing market trend towards private renting speeding up? More probably, we’re not quite sure exactly what’s happening, nor how fast. 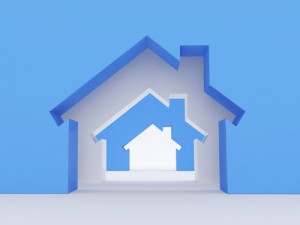 But it is fairly clear that there’s plenty of change in the housing market. We know that something like a million additional properties have entered the private rented sector since 2005.

We may be witnessing a structural reorientation of the housing market away from home ownership. Or we may be witnessing temporary turmoil as a consequence of the global finance crisis. It is more likely that the future trajectory of the housing market is yet to be determined. The negative equity of the early 1990s led to the rise of the “slump landlord”- owners who wouldn’t or couldn’t sell who rented out their property while themselves renting elsewhere – but that phenomenon largely disappeared as house prices moved upward again. So what we are witnessing now cannot yet be assumed to represent structural change. What policy makers do over the next few months will shape which future is realised. The only thing that everyone is agreed upon is that increasing housing supply is a good thing. Beyond that, there is room for debate.

The twentieth century was characterised by the decline of private renting in the face of the expansion of home ownership and council, then social, housing. From over 80% of the stock at the start of the century private renting dipped below 10% at the end of the 1980s. Home ownership became the majority tenure in 1971 and peaked in the early 2000s. We talked of governments of the day having a tenure policy – get as many people into home ownership as possible – rather than a housing policy. Academic and policy debate spent time wondering where the upper limit of “sustainable” home ownership might be. Yet, the proportion of households living in home ownership has been in decline since around 2003. This has accelerated since the credit crunch.

The credit crunch has seen mortgage finance dry up, loan-to-value ratios come down, and deposit requirements increase sharply. The age of first time buyers creeps higher. Many potential first time buyers are shut out of the market because they cannot save for a deposit fast enough. Nominal price declines mean a minority of existing home owners are in negative equity. They are reluctant to move and realise a loss. Mobility drops. Shortage of supply in both the second hand and new build markets keeps prices higher than they otherwise might be. The ownership market has silted up. It is arguably only very low interest rates and lender forbearance that has prevented absolute carnage.

The problems in home ownership mean we have seen more young people living with parents for longer or moving to form households in the private rented sector. Indeed, given that first time buyers are now likely to be in their 30s many people are raising families in private renting.

The question policy makers have to face is what sort of a problem this is. Few dispute there is a problem with affordability. But what follows?

The British psyche is seemingly programmed to privilege home ownership. Opinion polls continue to show that, even in the knowledge of the problems home owners have suffered recently, the vast majority of people wish to own. Owning a property is the primary vehicle for asset accumulation for most households. Over the decade 1997-2007 many people were able to make much more money from property than they did from employment. The fact that much of this wealth has evaporated seems somehow less significant. Renting, in contrast, is not paying for a service but “throwing money away”.  Most tenants are exposed to the insecurity of short leases. Some tenants are exposed to inadequate or unacceptably poor management and poor quality or dangerous properties.

Therefore one possible housing future is to try to get as many people back into home ownership as possible. Policy needs to focus upon increasing supply of housing for sale and turning on the tap of mortgage finance again. Last week’s report by the CBI, Unfreezing the housing market, broadly took this line and supported the policy direction the Government has set out. Some of the report’s recommendations were for innovation on the part of industry to deal with issues like facilitating moves by households in negative equity. Some – such as ensuring a better flow of funds to small and medium sized construction firms – are very sensible. But, surely to no one’s surprise, there was a strong emphasis upon reducing the regulatory burden on the construction and housing finance industries and a recommendation that government should take on some of the risk of lending at high loan-to-value ratios to first time buyers. The dangers of moral hazard with the latter proposal are clear. The CBI expresses concern about regulations emerging from the EU such as the Credit Agreements Relating to Residential Property Directive, which has also attracted the ire of the Daily Telegraph. The key issue here is that the Directive has the potential to kill off the Buy-to-Let market.

But is this a bad thing? Buy to Let is one of the mechanisms by which housing wealth inequality is being accentuated. The shortage of rental properties means that future rental streams from BTL properties can be forecast high, sustaining prices and meaning tenants are squeezed and cannot save for a deposit. Those who already have assets are able to acquire more, and in so doing make it harder for potential first time buyers to access home ownership. BTL is by no means self-evidently a good thing. It indisputably increases intergenerational inequity.

The CBI report includes a rather muted acknowledgement that it wouldn’t be a good idea to go back to the sort of irresponsible lending practices that led to the house price boom and crash. But it is lukewarm on regulatory intervention to ensure that doesn’t happen again. The only concrete proposal for financial reform is to change the structure of stamp duty. It advocates a move from a slab to a slice structure, which echoes the proposal earlier this year by the Joseph Rowntree Foundation taskforce.

The alternative housing future is to question whether the continuing emphasis upon home ownership is wise. Or whether stabilising the housing market towards a more sustainable structure involves rebalancing tenures. The tenure structure we appear to be moving towards is similar to that of several other European countries, where movement into home ownership is associated with maturity or middle age. They differ from Britain because private renting can be less unsatisfactory as a long term tenure. Tenants have more rights and are in a less precarious position.

Equally importantly, the housing market needs to be considered in the context of the labour market. Not simply in terms of short term concerns with unemployment, although these are undermining Government attempts to save money as Housing Benefit claims rocket. We also need to think medium term about the sorts of jobs that are going to emerge following the recession. Will maintaining international competitiveness require reductions in real wages? It’s already happening. The Government’s austerity programme, where it is not simply leading to job cuts, is about saving money by passing activity to other providers. Enhanced “efficiency” outside the public sector can often be about lower pay, poorer terms and conditions, more insecurity.  Are the jobs that are going to miraculously appear in the private sector to replace those lost in the public sector going to be long term, well-paid and stable? Or short-term, insecure and poorly paid? Zero hours contracts and the like. The long term financial commitments of home ownership do not mesh well with this type of future. Of course flexible financial products to complement a portfolio career are available, but they are not suitable for everyone.

We may well be moving in a direction where the “sustainable” level of home ownership is much lower than it used to be. If so then financial moves focusing on helping households to afford current prices are misconceived. Instead the focus should be on getting prices down to levels that can be sustained, given the income distribution. If we are looking at a new flexible and less well-paid future then housing policy needs to be striking out in a different direction. It needs to be coming up with proposals to make renting a more affordable, high quality long term proposition.  And ensuring  adequate safety nets for those who are compelled to transition between jobs.

To an extent this criticism is correct. But if the economy cannot support the sort of tenure structures we have had in the past it is no good trying to force it to. You end up with the sort of imbalances that led to the credit crunch, where levels of consumption were supported not by productive activity but by unsustainable mountains of debt. If the governments and peoples of western industrialised societies had faced up to that sooner rather than later then the crunch would have been less severe.

The point about asset accumulation is perhaps the one that requires most attention. Not only because it has implications for individuals who do not access home ownership, but it has implications for government policy on, most obviously, paying for care in older age. Long term renting would certainly mean that housing assets are not being accumulated through ones primary residence. But that does not mean that assets cannot be accumulated. If private renting were more affordable then that would allow accumulation in other asset classes or in housing bonds. For many of those who need, or are obliged, to be mobile this would probably be a more sensible proposition anyway.

A housing strategy is imminent. The future of the housing market needs to be thought through in a way that links it to other key areas of social and economic policy. The Government faces some crucial decisions that could send the housing market on very different future trajectories. Let’s hope they choose wisely.