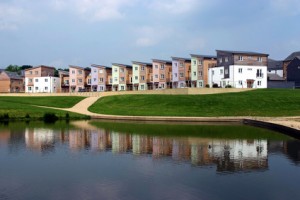 One of the few policy proposals that has been able to gain support across the political spectrum is the idea that we need a new generation of new towns. If we are going to make a serious attempt to address England’s housing problems we are not going to be able to do it with incremental growth around the edges of existing settlements. Either housebuilding on the fringes will be on too modest a scale to make a dent in the problem or, if plans are scaled up, they are likely to run into implacable local opposition and make impact on the problem at all.

Eighteen months ago David Cameron was making all sorts of positive noises about the Coalition’s plans to identify suitable locations for new towns. But it’s all gone a bit quiet since then.

Jim Pickard at the FT today notes that:

The communities department had been expected to unveil a “prospectus” setting out ways to create new garden cities. But the announcement has been cancelled on at least two occasions in the past year.

Today has also seen the launch of the 2014 Wolfson Prize in Economics, which is focusing on precisely the issue of new settlements.

Pickard also reports Lib Dem suspicions that the Wolfson Prize is primarily a bit of a distraction. It gives the impression that things are happening but nothing will, y’know, actually happen. At least not before the 2015 General Election. The Lib Dems are looking at their Coalition partners as the source of the problem:

“We have been waiting for this for more than a year as we are extremely keen, but this is collective government and the Tories seem to have gone cool on it,” said the Lib Dem aide.

Pickard offers a rather more specific reason for lack of progress:

Plans for a new generation of garden cities announced by David Cameron last year have been all but killed off after running into hostility in the Tory heartlands.

Eric Pickles, communities secretary, is understood to have quietly sabotaged the plans because of concerns that the “top-down” idea would cost the Conservatives votes in the Home Counties.

This seems all too plausible. And if it is anywhere close to accurate then it is yet another example of short-term political tactics standing in the way of meaningful action to deal with long-standing structural problems with the housing market. It is yet another example of precisely the syndrome that the SMF recently identified as having plagued our system of housing policy making for at least the last two decades.

Undoubtedly a policy identifying and developing new towns is going to have a strong top-down element. That would be the only way to deliver developable land on the scale required. Attempting to do it by voluntary agreement at local level is a non-starter.

You can surely have too much insensitive, inappropriate one-size-fits-all top-down policy. But it must equally be recognised that major strategic policy objectives will often only be achieved using policy with a strong top-down flavour. If “top-down” is ruled out as being unacceptable by definition then we really are in a jam.

Sometimes you despair, you really do.