Is the Minister of State being naïve or disingenuous? 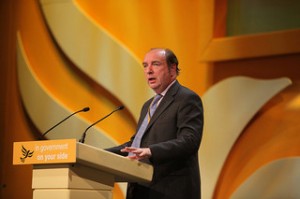 Sometimes pronouncements emanating from Liberal Democrat Ministers are a puzzle. They are either naïve or disingenuous. And if they are disingenuous then they must think we’re all naïve.

The proximate cause of this observation is Norman Baker’s post “We’re not turning into authoritarians!” at Liberal Democrat Voice yesterday. The focus of Baker’s post is the Coalition’s proposals to reform anti-social behaviour legislation. The aim of the post is to assure everyone that:

It is utter nonsense to suggest we are targeting skateboarders, ramblers, youngsters playing in their local park, or anyone else going about their daily lives perfectly reasonably.

In reality the new anti-social behaviour powers are designed to protect such activities.

It has also been suggested that the Coalition plans to curtail rights to peaceful protest. This is also nonsense and nothing in the Bill does that. I have made it clear on the floor of the Commons that peaceful protest cannot be subject to a dispersal order and we do not believe that the public spaces protection order could be used in this way either, or to prevent wider peaceful protest, but in the light of the scare stories generated, I am looking at what further steps we might take to make this even clearer.

This intervention is somewhat at odds with most other commentary on the Coalition’s bill. The general view is that the bill is so shockingly loosely drafted that it could be applied to just about any activity that someone takes exception to.

One interpretation of statements such as Baker’s is that they are hopelessly naïve. They demonstrate a remarkable failure to appreciate how the law works and how it will be put to work. Even if Baker is not personally an authoritarian – and of course we all agree that he isn’t – then he should know that ambiguous and badly drafted law will be exploited by those with more authoritarian and oppressive intent.

No liberal should need to be told that. Constant vigilance is required. If the State is to be given circumscribed powers in specific circumstances then that needs to be clear on the face of the Act, with minimal scope for creative and expansive interpretation.

The alternative is that Baker knows this perfectly well. In which case he is being disingenuous. And he is assuming that we’ll all be happy to accept his assurances that everything is hunky dory.

Either prospect is rather unappetizing.

I was thinking about Baker’s comments in the light of the sad news that Mark has resigned from the Party. Mark has set out his reasons for leaving very clearly and his post invites serious reflection. His reasons are much to do with the inadequacies of party politics generally, rather than the Liberal Democrats specifically. But in passing he reminded us of the Liberal Democrats’ abject failure to deliver on their constitutional reform agenda and, less explicably, their capitulation, in the face of unanimously-agreed party policy, on the issue of secret courts.

It looks like, unless something changes pretty sharpish, on anti-social behaviour the Liberal Democrats run the unnecessary risk of be implicated in another set of deeply illiberal policy proposals.

And in the process they will further undermine the rationale for their very existence. And further test the patience of their liberal supporters.