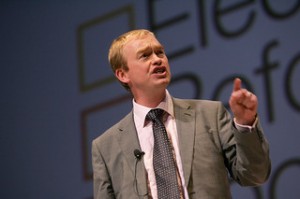 Tim Farron is by far the most accomplished orator among the current generation of leading Liberal Democrat politicians. Rarely does one of his speeches as Party President pass without someone making use of the word “barnstorming”.

His speech on the opening day of this year’s autumn conference was no exception. Farron is adept at pressing all the right buttons for the party faithful.

His speech today roamed widely. It touched on the benefits of immigration, being part of Europe and remaining a United Kingdom. The last is, of course, particularly pertinent given the location of this year’s conference. There was a strong call for more house building, with more than a nod to Beveridge and the fact that the welfare state was founded in the face of considerable adversity. The strongest response and loudest applause followed his call for the Liberal Democrats to approach the 2015 election with a genuinely independent and liberal manifesto, rather than one full of policies that are pre-compromised and digestible to potential coalition partners.

But today’s speech was not simply the first of several over this gathering aimed at rallying the troops to face the challenges of what is likely to be a gruelling 2014 European election campaign.

It was also quite clearly a piece of positioning ready for a future leadership contest. The rhetoric was fascinating. There was the attempt to establish the ethos of humble beginnings. Subtext: unlike some others we could mention. There was the motif : “on my watch” I won’t let X, Y or Z happen. The stance on policy compromise, on immigration, on addressing poverty were all somewhat at odds with messages emanating from Nick Clegg’s circle. The emphasis on the environment challenge as the most pressing issue we face might be contrasted with the watering down of early claims that the Coalition would be the greenest government ever. The subtle use of the word “audacity” (Trademark: B Obama) suggested aspirations to leadership on a bigger scale and a bigger stage.

The other motif of the speech was the “new consensus”. The precise nature of this consensus, and between whom it exists, was never entirely transparent. But it worked well as a rhetorical device. One rather got the sense that the speech was an attempt to bring such a consensus into being through force of will.

It was noticeable that Farron attacked David Cameron directly but steered clear of doing the same to Ed Miliband. After his comments about Miliband to the press earlier this week that will no doubt be interpreted as a not so subtle signal about the direction in which he would prefer to look for a future coalition partner. Farron had a dig at Labour but nothing that Labour would find too painful.

That should hardly come as a shock. It’s no more surprising than the fact that Jeremy Browne’s post at Liberal Democrat Voice today made it fairly clear he hankers after another coalition with the Tories.

Farron is seen by many activists as offering the hope of bringing their party back to them. His reference to being “left of centre” earlier in the week no doubt further kindles those hopes, while at the same time irritating the centrists in the court of Mr Clegg.

But I can’t help feeling that it is the luxury of not holding ministerial office that gives Farron the latitude to articulate a much more identifiably radical liberal agenda than that proffered by the leadership. Carrying such an agenda into government would be a whole other set of challenges. The risk of high hopes being crushed once again must be considerable.

Be that as it may, today feels like the start of a new phase in the life of the Liberal Democrats.

Here’s the speech. Check it out for yourself and see if you agree with me: