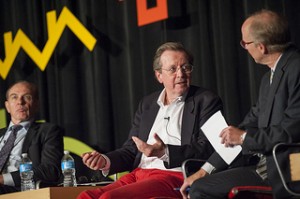 Last night George Ferguson gave his first Mayoral State of the City address in the Great Hall of the Wills Memorial Building. This launched both the Mayor’s Vision for Bristol and the consultation on the local authority budget.

Following the Mayor’s presentation there were brief responses from Alexandra Jones from Centre for Cities, Tony Travers from LSE London, and me. We only had five minutes each. Below is the text to accompany my presentation. Delivery didn’t quite match the text because I was editing down to 5 minutes. You can listen to the whole event here for the next few days. As usual, I win the “who can talk the fastest” competition.

We are now marking the first anniversary of our first mayoral election. The occasion is provoking plenty of reflection. Not just locally, but also nationally and internationally.

When the city voted for a mayor in 2012 it was voting for a leader with greater visibility. It is fair to say that we have got one. George is much more high profile – in person, in the media, on Twitter – than previous Council Leaders. George may not yet have the name recognition of Boris … or Madonna … but he’s on the way. If electing a Mayor was primarily about moving to the era of city leader as celebrity then that is a task we can mark as largely complete.

But visibility was never an end in itself. It was a component of reconnecting city leadership with the people. It had the aim of increasing engagement with local politics and revitalising local democracy. It spoke of aspirations for more focused and consistent leadership. It spoke of breaking away from the deadlock and instability that were perceived to afflict city leadership under previous governance models.

Having voted to move to the elected mayor model there is now limited scope for changing to a different model of local government. So there is little point rehearsing old debates about whether it was the right decision. Now is the time to take stock of whether we are moving in the expected direction.

It is important to recognise the national context in which we are doing so. The national policy context has two characteristics of particular relevance to the discussion.

First, there is the overriding emphasis is upon fiscal consolidation. This has hit local authorities very hard already. It is going to get more difficult. And, depending on the outcome of the next election, David Cameron’s recent comments suggest we may face the prospect of permanent austerity.

Second, because we have experienced the longest economic downturn in a century, there is an overriding policy focus upon economic growth. Much of the Government’s agenda around regulatory reform, for example, has been rationalised as being about removing barriers that may stand in the way of growth.

In this context the tone of the Mayor’s Vision document is important.

The document includes the expected emphasis upon innovation, skills and infrastructure. The growth agenda demands that these are prominent. And of course Bristol is well placed in this regard. It is a Science City, a Smart City, a Superconnected City.

But this focus upon economic growth is leavened by a clear concern for people. A concern for health and for care. For active citizens. For engagement. For inequality.

George has established a vision that is no doubt attractive. It encompasses a laudable set of objectives. But in that sense it is a tantalizing document. Quite properly it does not dwell on details. But it is the details that will shape the sort of city that Bristol becomes. The challenge is in how the various areas for action are prioritized and the scale of activities in each area.

The Vision is launched at the same time as the budget consultation. And it is only by putting the two into dialogue that it becomes clear quite where the priorities lie.

Let’s take one example. From the headline information provided in the Vision document the aspirations for increasing housing supply represent a significant increase over current performance. But the proposed increase in the supply of affordable housing is not going to be sufficient to deal with the forecast increase in housing demand. So while current affordability problems may be mitigated somewhat, they aren’t going to be dealt with. It is quite possible the problems will get worse.

And we know that housing affordability is one of the key problems facing the city. It is one of the indicators on which we score relatively poorly in the DEMOS/PWC Good Growth index reported in the newspapers this week.

That isn’t necessarily a criticism of the vision. It may accurately identify what can realistically be achieved in the context. But we need to understand how far it will get us. And how much further there is to go.

We are in challenging times. And the challenges are going to get tougher. That would be the case whoever held the Mayoralty. The citizens of Bristol will need to pull together in new ways if people are not to be left behind. The Council can, and must, play an enabling role. This is vital.

One of the concerns that has been expressed locally over the last year is a lack of articulation of the big picture. Where is policy heading? Individual initiatives – for example Residential Parking Zones – are part of a bigger plan. They connect up with other developments. Some of which may not have arrived yet. But those connections are not always visible from ground level. The big picture is not clear to all. And, even for those who understand the big picture, it is not always clear when all the pieces will fall into place. So people get angry and upset.

We must hope that the publication of the Mayor’s Vision is the first step in a more concerted approach to communicate and carry people along with it.

In that respect the inclusion in the vision statement of reference to an empowered city and active citizens is very important.

On the one hand, George, along with other Core Cities leaders, needs to keep the pressure up on central government to devolve more powers.

The Government accepted Michael Heseltine’s recommendations that greater control needs to be brought down to the Local Enterprise Partnership level – the West of England level – and that greater co-ordination across local authorities is to be welcomed and supported.

If one were an optimist, one would argue that possibilities are opening up in ways that have been denied for a long while. But continued pressure needs to be applied. Government will not voluntarily relinquish power. And if there are possibilities for change then perhaps it is prudent to assume the window of opportunity will not continue to be open after May 2015.

On the other hand, our elected Mayor sits on top of a local democratic structure that is largely unchanged.

If the Mayoral model is going to be a success we cannot expect the Mayor individually to do it all.

At the moment the role of councillors in this new world is by no means clear. This needs urgent attention – from councillors as much as the Mayor.

We would also benefit from greater clarity regarding, for example, how discussions taking place in Neighbourhood Partnerships feed in to broader decision making. Or what sorts of additional powers might be given to bodies such as Neighbourhood partnerships to make more decisions at local level.  I know that there is interest in greater use of participatory budgeting, for example.

Connecting up these various governance structures in meaningful ways is vital to the future health of local democracy in Bristol.

These sorts of issues are identified indirectly in the Mayor’s Vision. The nature of the answers will be crucial in shaping whether the Mayoral model achieves its potential.