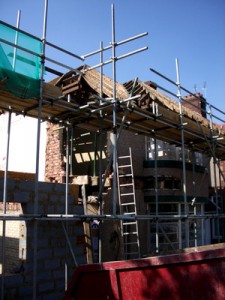 It’s hard to know what to make of yesterday’s slew of policy initiatives in the housing field. It is clear that they are directed primarily at boosting the economy, rather than being any sort of considered response to the problems of the housing market. You get the sense that the Government has pretty much run out of ideas and it just so happens that doing something with housing investment might help. It’s incidental that it is housing. It’s the only lever left to pull.

There has already been a healthy debate in the mainstream and social media as to whether any of the Government’s initiatives will have much impact upon either growth or the housing market.

Much of the media attention has been directed at the relaxation of planning permission on extensions and conservatories. I think it is a safe bet that this is going to make negligible difference to economic activity in the aggregate.

Eric Pickles, in yesterday’s written statement, referred to this initiative as removing bureaucratic impediments to people making improvements to their homes. Of course, that completely fails to understand why the planning laws are there. It fails to recognise that some modifications to housing may not constitute “improvements”.

Few such home modifications are frustrated because of the planning system. Planning permission is not expensive to obtain – certainly not compared with financing the building work itself – and in most areas is not unreasonably withheld. Only if someone is proposing to do something that is unsightly, out of all proportion with the neighbourhood, or which significantly interferes with their neighbours’ amenity will permission be denied. So we can only suppose that if this is going to make any difference in the short term then it is going to mean people will start up work on projects that have previously been refused permission.

That will presumably set neighbours against each other. It will make work for lawyers as neighbours try to contest the projects or claim damages as some hideous jerry-built extension knocks a few thousand off local house prices. It will presumably lose some MPs some votes.

It is a policy that could only have been cooked up by someone more used to living in several acres of grounds, whose enjoyment of their immediate home environment would go unaffected by their neighbours whacking up an unsightly 8m extension because it is too far away for them to see it.

As a policy it might help those who can’t afford to move but can afford to modify their existing dwelling. It may ease the housing pressure if your children can’t afford to leave home and you’re running out of space. But it won’t make any contribution to the need for a vastly increased rate of supply of new housing.

There were other, potentially more significant, moves to relax planning regulations. Most obviously we have an extension of the policy of allowing builders to renegotiate s106 agreements and reduce affordable housing requirements where they are seen as unduly arduous. I’m a bit ambivalent about this. Clearly it must logically be the case that s106 agreements finalised in times of boom are going to look distinctly unattractive in a slump. So there must be schemes that are no longer viable as originally conceived but which could be made viable if the affordable housing requirements were watered down. However, it is clearly a sop to developers who would rather there were no s106 requirements placed upon them at all because they reduce profitability. The crisis gives a convenient pretext to try to get the conditions removed. It’s not as if the developers aren’t making money at the moment. They’re making money. They’re just not building houses to do it.

Partly we are facing the consequences of a concentrated construction industry. Partly we are facing the crystallisation of a risk that has been immanent for many years. For a long time academics have pointed out that governments were failing to invest enough in new housing supply and instead were relying more and more on s106 agreements to meet affordable housing targets. At some point when the markets turned sour that strategy was going to backfire. So it has come to pass.

This Government, for all its PR push yesterday, still isn’t proposing to spend a lot more public money on housing. There is £300million apparently found down the back of the sofa to put in to building affordable housing that will be lost through the renegotiation of s106. But the bigger sum for rented housing – £10bn – appears not to be government investment but a government guarantee. That immediately raises two questions. Who is going to lend the money? And who can afford to borrow it? The problem in the social rented sector isn’t so much the creditworthiness of landlords – some of them have credit ratings that are not much worse than the Government itself – but the absence of collateral to borrow against. That problem is likely to get worse if the Government were to adopt the Policy Exchange proposals to sell off valuable housing. The other problem is that the Government’s own welfare reforms are increasing risk and uncertainty over future income streams.

It is clear that the Government is trying anything and everything it can think of – however outré – rather than invest any public money. I thought it was notable this week that in its report on the mess of the housing market Tullett Prebon argued that the government needs to invest money directly rather than get involved in any more spivvy, poor value-for-money PFI-type schemes. It seems odd that the Government is running scared of the City’s reaction to it borrowing more for public spending, when the City are signally, to the contrary, that they think that is precisely what they should be doing.

Perhaps the most interesting development in yesterday’s announcements – which wasn’t quite so prominent in the media reporting – was the arrival of what Eric Pickles referred to as “muscular localism”. In fact, of course, that is a total misrepresentation of what he is talking about. The Government wants houses built. And it largely wants them built where builders want to build them. Mr Pickles doesn’t want local authorities standing in the way of these desires. So if local authorities take too long to decide or have a record of “poor-quality” decision making then responsibility for decisions can be passed to the Planning Inspectorate.

Given local authority budget cuts have affected planning departments it would not be surprising if decisions are taking longer. That opens up more scope for removing land use planning powers from more local authorities, as those who were previously keeping on top of the work succumb to the pressure.

We await definition of “poor-quality” in this context but we must presume it means decisions that Mr Pickles and the housebuilding industry disagree with. Our cuddly Communities Secretary comments rather ominously:

But what of localism? The Government has just gone through the process of legislating to give communities and neighbourhoods more power to shape development in their area. What if the majority view is that they don’t want more development? It would appear that this is not a valid answer:

The Localism Act has put the power to plan back in the hands of communities, but with this power comes responsibility; a responsibility to meet their needs for development and growth, and to deal quickly and effectively with proposals that will deliver homes, jobs and facilities.

Clearly, if a proposal for a scheme that will deliver homes, jobs and facilities then the answer the community must come to is “go ahead”, regardless of whether there is genuine local support for it. Otherwise the decision will be formally relocated to someone who will green light it. It would appear that any power for communities to shape their own destiny is being stripped away shortly after they were given it.

This reassertion of the dominance of Westminster – which has done so much to undermine people’s engagement with local politics – is so unnecessary. Many planners had already got the message following the implementation of the National Planning Policy Framework. Permission was not being unreasonably withheld. There are plenty of outstanding permissions in the system but homes are still not getting built.

The Government’s obsession with planning bureaucracy is very real. And to deny that planning processes could not be improved would be absurd. But this policy development is taking place in a parallel universe. There may be problems with the planning system. But it isn’t the short term problem. The broader adverse economic and financial context is at the root of the problem. Yesterday we saw the OECD downgrade its forecast for UK economic growth for next from growth of 0.5% to a contraction of 0.7%. If that is in any way accurate then it will blow the Government’s economic plans entirely out the water.

The Government can hack away at planning all it likes. Its friends in the construction industry will no doubt be very grateful. But unless the mortgage market improves, consumers’ price expectations stabilise and their confidence in their own economic future increases there is no one with the wherewithal or the willingness to buy the properties. So they won’t get built.