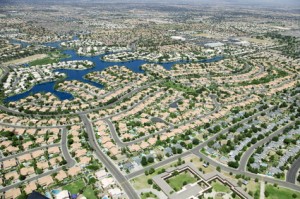 On Wednesday the Institute of Economic Affairs discussion paper Abundance of land, shortage of housing, by Kristian Niemietz, was launched on to an unsuspecting world. The timing of this launch is intriguing. We are still trying to come to grips with the final version of the National Planning Policy Framework (NPPF), published only three weeks ago. One would assume that further major reform of the planning system was off the agenda for a while. So it’s a slightly odd time to launch a report which restates the argument that land use planning is the source of most of the housing affordability problems we’re facing in the UK.

Of course, it may be that the way the NPPF story played out is precisely what triggered a restatement of the anti-planning case. The denouement of that particular policy saga was rather different to that anticipated by many. The draft framework put out for consultation last year was pretty horrible. It was criticised as such by many practitioners and commentators, including the Select Committee. In the run up to the publication of the final version there were all sorts of rumours that the Treasury had got its way and prevented major revisions. That it had blocked the reinsertion of various protections and prevented the watering down the presumption in favour of development. As it turned out, these rumours were not entirely well-founded. There were some significant changes of tone in the final NPPF. Of course, that led those who were seeking significant deregulation to hail this as a missed opportunity and a triumph for the forces of conservativism. Hence, perhaps, the IEA paper.

Local policy makers, practitioners and communities are still trying to make sense of the NPPF. How will it work in practice? Will communities be able to fulfil the roles expected of them? How will planning for housing link up with planning for infrastructure? Is the Government’s drive for brevity – moving from 1,000 pages to 50 pages of guidance – a dramatic and welcome simplification of the system? Or does it just inject such a large slice of vagueness and ambiguity into the system that it is little more than a recipe for litigation on an industrial scale. A brief summary of some of the concerns emerging from a recent Guardian Housing Network discussion is available here.

But the IEA are looking beyond these details to the bigger picture. And the bigger picture is the problem of planning. Abundance of land, shortage of housing is perhaps a little less transparently dogmatic than most of the IEA output, but the message is broadly the same.

The report is interesting because it runs through a number of factors that have been identified as generating our affordability problems and contends that the arguments are weak, the impact of the factors identified is modest, or the focus is erroneously upon effects rather than causes. Or, as the author puts it rather more robustly (p5):

This paper will address a selection of the non-arguments often heard in the housing debate, and will show why none of them can explain more than a trivial share of the housing cost escalation. It will then go on to show why only a thorough liberalisation of the land use planning system can address the affordability crisis.

The factors dismissed by the report include increasing population density; restraints on assistance with housing costs – specifically housing benefit; the Right to Buy reducing the supply of social housing; speculation in residential property; the absence of property taxes; insufficient regulation in the private rented market; misallocation of the housing stock.

Some of this discussion is good knockabout stuff. Most of the arguments offered against these various factors are very truncated, with the reader invited over a paragraph or three to accept the patent absurdity of the view being critiqued. Some of the points are well-made. The author is absolutely right to point out that some of these arguments – such as the need for a more generous or differently targeted housing allowance system – are focusing on the symptoms rather than the causes. Some of the points rather less well-made. In a discussion as truncated as the one offered here subtlety almost inevitably goes out the window and the author sets up some straw men to knock down. The argument that deregulation of private renting far from being a problem is one of the few strengths of the UK housing market seems to be a caricature of a different type.

The tone of the discussion of the planning system is rather different. It engages much more directly with the academic literature, or at least the literature as it was up until the last few years. It is certainly the case that the literature – much of it generated in the US – is largely supportive of the view that zoning and other forms of land use restriction have the effect of increasing housing and land prices.

Niemietz considers that the proposals advanced by the Coalition government through the NPPF do not go far enough in dealing with the barriers to development. He offers a familiar diagnosis. The current system is too restrictive and needs to shift to being grounded in a genuine presumption in favour of development. But, equally importantly, the incentives it embodies are wrong. Local communities lack the incentives to support development in their area. The costs are imposed upon them in terms of increased development/density and potentially reduced environmental amenity, but they do not get to see the benefits in terms of a larger tax base to fund local services. So a key part of the problem is the centralised nature of the British taxation system. If revenue was not just raised locally but stayed local and could be spent locally then that would open up different types of conversation about the desirability of development.

While the urban economics literature generally finds land use regulation to impact negatively on affordability, it would be fair to say that over the last few years the arguments over the role of planning as a barrier to development have been tempered a little. Economists have tried to set the effects of policy and the planning system more clearly in the context of the impact of history and geography on local spatial development. Equally importantly, even in the conventional housing economics literature there has been something of a move towards understand the causes of planning regimes. That is, in the Niemietz’ terms, when we focus upon planning as the problem we are focusing upon a symptom rather than the cause. If one were to be incautious one might even suggest that the literature is edging towards a political economy of planning.

If we want to develop a more rounded understanding of the problems of housing supply then we we have to get beyond an obsession with planning. That doesn’t mean that planning and planning reform isn’t part of the story, there is too much evidence that it is an issue for it to be ignored. But it means that a persistent and exclusive focus on planning provides an equally partial and inadequate understanding of what is happening.

In the literature, there is a broad consensus on the variables affecting house building—for example, house prices (both the level and change), construction costs, credit costs and availability, land use regulation, uncertainty, impact fees, the weather—although no study includes all these factors together.

And within this mix of factors “uncertainty” can be taken to refer to both volatility in house prices and uncertainties about the strength of demand that flow from broader economic and labour market developments. One factor that Meen and Nygaard don’t mention, and upon which Niemietz is equally silent, is the structure of the construction industry. To build a comprehensive understanding the problems of housing supply then the distinctive highly concentrated nature of the building industry needs to be integrated in to the story (as I previously noted here).  It is to these factors, not the deficiencies of the planning system, that we need to look for the explanation of the recent desperate performance on housing supply.

David Miles’ recent paper for the Bank of England is highly relevant to this discussion. He argues that explanations for the dysfunction in the UK housing market that focus upon planning are superficial because they don’t account for, among other things, the way in which the value of and demand for non-developed land changes with growth in income and population density. This suggests that even viewed from a strictly economic perspective, suitably specified, the relevant trade-offs can look rather different. He develops a simple model from which some of the stylised facts of the UK experience of relatively poor housing supply performance can be derived.

But, equally, this is a debate in which you rapidly run up against the boundaries between the economic worldview and other perspectives. What is it that is motivating people in their decisions over local spatial development? Is offering them the opportunity to pocket a few quid or save a few quid on their local tax bill sufficient to change their minds? In this respect it echoes the debate over whether Grant Shapps’ New Homes Bonus offers a sufficient incentive for communities to agree to development locally.

Glaeser and Ward draw the following conclusion in their recent paper** on local land use restrictions:

Regulations do appear to increase prices, but the impact of density on prices is generally quite modest. As a result, communities seem to have density levels that are far too low to be maximizing their land values. This suggests the possibility that current land use controls are suboptimally restrictive, and it leaves us with the puzzle of understanding why communities are not choosing to maximize land values.

To which the non-economist might reply: because when people make decisions about their neighbourhood, its environment and amenity they are focusing on their subjective assessment of quality of life not on maximising land values. As with other “puzzles” in economics – such as the puzzle of voluntary regulatory compliance – they are only puzzles when your worldview is constrained by a particular type of economic blinkers.

I’ve a feeling we may have a few more laps of the planning reform track to complete over the coming months. Now there’s something to look forward to.