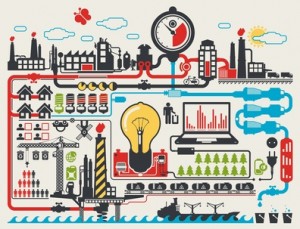 The arrival of the festival coincides with my finally getting the chance to finish Diane’s recent edited collection What’s the use of economics? Teaching the dismal science after the crisis (WTUOE). The book arises out of a seminar held back at the beginning of the year, which I would dearly have loved to have attended. Unfortunately it clashed with teaching my economics of public policy unit. The book comprises 22 brief chapters giving a range of perspectives on how economists should respond to the deficiencies exposed by the 2007-2008 financial crisis.

At least some parts of the economics community are in reflective mood. 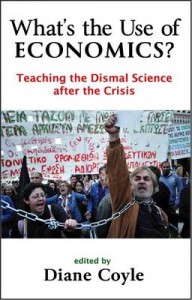 One of the key questions contributors to WTUOE address is how the curriculum at undergraduate and postgraduate level should be changed to equip students with the knowledge they need to put economics to work in the real world. Much economics education, particularly at postgraduate level, is geared towards producing academic economists specialising in producing clever models addressing relatively esoteric concerns. But the vast majority of students with training in economics won’t go on to have academic careers in economics. Particularly relevant here are a couple of thought-provoking contributions on the role and activities of economists in government.

Equally profoundly, how does economics need to change as a body of knowledge in response to the explanatory failures of existing approaches?

The discussion of how economics students can be better equipped encompasses both macro and micro, while the discussions of the theoretical adequacy or otherwise of contemporary approaches is mostly macro oriented. Given that the starting point of the discussion is the financial crisis that is understandable.

The contributors to WTUOE differ significantly in their views on how much established economic approaches need to be modified. The minority view among contributors is that mainstream approaches need a bit of tweaking. With more sensitivity to characteristics of real world economies which don’t typically feature in conventional RBC models of whatever flavour – institutional structures, the banking system, finance and debt – perhaps business can continue pretty much as usual. However, the view that a more profound shift is necessary is just as frequently encountered as you go through the chapters. Contributors argue that models that rely on representative agents and rational expectations, for example, are inappropriate tools for analysing networked societies of heterogenous agents interacting on the basis of bounded rationality. Alan Kirman provides a typically thoughtful contribution. The argument is not the sort of anti-formalist argument that some heterodox economists advance. Rather the argument is that economists have got stuck using the wrong sort of mathematics. They need to embrace a vision of the economy as an evolving complex system. And that implies fundamentally different modelling strategies.

The contributors similarly differ in respect of the teaching of economics students. A minority view is that there isn’t a great deal that needs changing. But the more common argument is that economics education has become too specialist and too narrow. There is little space in the curriculum for the history of economic thought or economic history and the study of the evolution of economic institutions. Where student do applied work it often involves the secondary analysis of other people’s data. Rarely do students explore the problems associated with collecting primary data – either administrative data or through surveys. The judgements involved in transforming the messiness of the world into the neatness of the rectangular data matrix – problems of coding and classification – go unexamined. These are topics that other social scientists find squarely at the centre of their research methods training. But economists tend to be rather incurious about the processes by which the data arrive in the archive. Never mind “garbage in, garbage out”, it tends to be full speed ahead to apply the most complex statistical technique they know. I caricature. But only slightly.

A number of contributions, particular those looking at the work of economists in government, highlight the emphasis of the economist’s education on deductive reasoning rather than also exploring processes of induction. The strand of macroeconomic thinking that views the core of macroeconomics as primarily being about models that can be run on computers, without the urgent need to bring those models into close dialogue with real world economies, is deprecated.

Far from living a life of pure deductive reason, applied economists in the real world are often required to start by piecing together data before trying to make sense of it by applying some theory, while recognising the importance of institutional constraints and incentives in a way that much theory does not explicitly capture. The “science” requires a dose of the art of judgement in order to become useful.

Indeed, there is a suggestion that economists could do with being, at the very least, sensitised to the sort of concerns that sociologists, political scientists and psychologists bring to the analysis of society in order to enhance their ability to interpret the world effectively with the aid of economic theory.

A word that crops up several times in the contributions to WTUOF is “humility”. There is the suggestion that there has been an unwarranted arrogance about mainstream macroeconomics. Several contributors feel that, having had its deficiencies exposed and its certainties undermined, this attitude needs to change.

Few of the contributors to the book framed their chapters explicitly in philosophical terms. Yet, much of the material was underpinned by some profound questions of ontology – what does “the economy” comprise? – and epistemology – how can be best represent and analyse “the economy”? In emphasizing the importance of the history of economic thought contributors raise important questions about how economic knowledge evolves. Indeed, whether it in any meaningful sense can be said to accumulate. In the absence of experiments or crucial empirical tests it is possible that knowledge evolves through fads, fashion or as a result of social factors. That opens up the possibility that good ideas were dropped for bad reasons. Or knowledge may move on as a result of real world events that demonstrate existing paradigms are inadequate. In this respect Wendy Carlin’s chapter on reforming the macroeconomic curriculum was particular interesting. She suggests that it is possible to weave together the content of economic theory, the history of economic thought and economic history to give an account of how economic crises generate paradigmatic shifts in thinking, which feed into policy, which in turn generate new crises. Students would not only come to understand the content of different theoretical approaches to macroeconomics but do so in a socially embedded way. This in itself should, if done effectively, deliver an appropriate degree of humility about whatever is considered to be the current state of the art.

You’ll not be surprised to discover that I am in agreement with many of the contributors to WTUOE who argue for this more pluralist approach to economics education. I have no doubt it is beneficial. Certainly it is the way I try to structure my own approach.

It is great to see some of these debates moving beyond the realm of the economic methodologists and edging closer to the mainstream. But I feel that there is still a way to go before it penetrates the heart of the citadel.